Fifteen Days on the Road and Going Nowhere Special 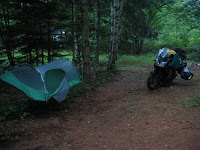 Up early, pack up my gear, hit the road in deep fog, again. It must be my karma.

My historic moment, today, was to find the most eastern point in the US. That place is the home of a lighthouse. The 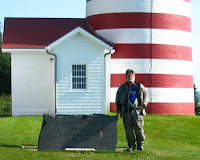 most eastern town in the US is Lubec, ME. There is a fine restaurant in that little town that services a good breakfast. After taking my own picture by the nation's cornerstone, I was back on the road.

Today was a long ride from Maine to the west end of Vermont. As the crow flies, it’s a short trip; about 400 miles. As a rider, it takes forever to cross these tiny states. Here’s my take on those states:
. Maine – Highway 1 is a rolling disaster, unless you have the suspension for it. Maine’s road maintenance plan is not apparent. Traffic speeds are slow to parked and the speed limits are prehistoric.
. New Hampshire – More prehistoric speed limits. Mediocre roads and way too many “towns.” A New Hampshire town is a bump in the road with a lowered speed limit for no obvious reason. I had a good time on both Maine and New Hampshire roads, but I ride a V-Strom and my new ELKA rear shock got a workout.
. Vermont – Great roads, silly low speed limits that nobody pays attention to, and I haven’t seen a cop in the state yet. The east side of I91 is pretty tourist oriented, the west is not so much. 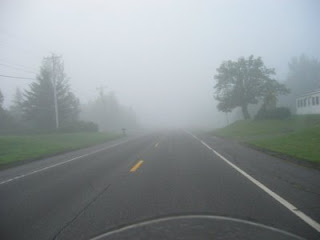 I started out slogging through pea soup fog. I ended up rocketing along a Vermont back road with lots of high speed company and having a ton of fun in the twisties. I’m just traveling today. No tourist stuff, no cool pictures, just logging miles heading west toward the Adirondacks. This is pretty country, but not much different from western Wisconsin from a riding perspective. Calling these bumps “mountains” does a disservice to real mountains everywhere.

I wanted to make 400 miles before I gave up for the day. I also wanted to find fuel before I stopped. Those two goals screwed me up for the night. My artificial target was Montpelier, VT. There was no reason for that goal, I just decided on it arbitrarially. The fuel objective was practical. If I can hit the road without needing to stop for anything, I can get further in the morning than in the afternoon. I don't know if that is me or because of traffic, but it appears to be true. After the Adirondacks, I have no other NY objectives but to get the hell out of the state. I don't have any reason at all to be in Pennsylvania. I'd rather spend a couple of days in Wisconsin than in any of those places. I have some interest in Erie Canal history, but I don't have any idea how to satisfy that itch.

Once I passed Monpelier, no sign of camping areas or decent motels came into sight. I kept going, hoping for more luck. On highway 100, heading south, I decided enough was enough. It was approaching 6PM and nothing good happens in moose territory after dark. I stopped at a Fayston station, got directions for a place to put up a tent, and headed that direction. I didn't make it. Half-way up the mountain, I stumbled into an inn with reasonable rates and great food and better beer.