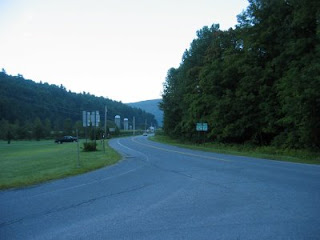 Got up early, hit the road in the wrong direction, made a u-turn, and headed back down Vermont 17. Turns out my excursion to the inn last night was actually on my GPS plan. Once I’d started looking for a place to stop, I quit looking at the GPS, which must have frustrated the electronic biddy in the box, but I’d turned where I was supposed to turn by accident. Not knowing that, I reversed directions and headed back to 100. My GPS kept telling me to make a u-turn, but I figured it was stupid, or something. Finally, I stopped, looked at the map, realized the GPS was smarter than me, and went back up the hill. Sorry, east coasters, the mountain. Yeah, that’s what it is. It’s a little, tiny, rounded top, tree-covered mountain.

Vermont 17 is a blast. The speed limits are totally cowardly, but the road is good, the scenery is tree-lined but occasionally nice, and the ride is a good morning workout. I’ll be ready for breakfast after 150 miles of this. My GPS plan kept me off of main roads and on fun backroads all the way through Vermont into New York. I am amazed at how little traffic and how few houses there are in this well developed part of the country. I went through a town called Moriah that was celebrating its 200th birthday. Amazing, 200 years and they still haven’t found the time to build a restaurant. Makes me feel much better about coming from a younger part of the country. We may be new at this business of civilization, but we’re better at it. We don’t talk funny, either. 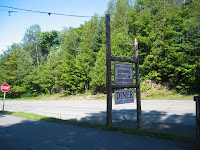 I stumbled on a convenience store/restaurant/campground on New York country road 84. I was entertained with an incomprehensible “upstate New York” dialect that combined with my single unplugged ear turned ordering breakfast into a Laurel and Hardy routine. I could have sworn he was saying ‘have some home fries,” but he was saying “don’t have home fries.” Turned out, his wife is the official cook, but she was occupied with getting the kids sorted out. He did an ok job with the sausage (“I like sausage.”), but the pancakes were burned and a bit flat (“I don’t like pancakes, you should have ordered an omelet.”). Later, he tried to convince me that I needed ice cream to go with my breakfast, since it was a balmy 45F outside that morning. I think we entertained each other enough, so I am on the road again. 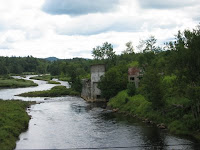 New York speed limits are some kind of testament to the conservative nature of old America. What New York considers to be a 25mph corner, Colorado would label 45mpg. New York 35mph corners wouldn’t be worth the trouble to label or even put up a turn sign in the west. I kept seeing twisty corner signs and being disappointed with gradual curves hardly worth pushing on the bars. I guess that goes with calling 2k bumps “mountains.”

I kept going through New York the coward’s way, I90. After slogging my way through zillions of dots on the map jokingly called “towns” with the usual 4 miles of 30mph speed limits and no buildings or residents in sight, I gave up on “seeing New York” and decided to blow through every thing from Rochester west. I missed many valuable history lessons, I’m sure, but at least I wasn’t bored. New York freeway drivers are challenging, even if the freeway is a freeway (except for the $11 toll I paid to be on the US taxpayer subsidized interstate system). I whipped though most of the tiny bit of Pennsylvania the same way. I’d lost interest.

I was aimed for the Cleveland home of an old friend and I made it to their general territory about 8PM . I’ll be there for a day or two. I have a vicious plan for the last couple of days of this tour. Stay tuned.
Posted by T.W. Day at Sunday, August 17, 2008