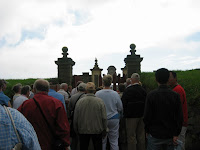 I gotta hope that title is bogus. But today is my thirteenth day out. After getting drowned yesterday, I can only imagine so many ways today could be worse. However, the sun is shining and the air is warm and humid. It feels like summer again. I am almost inclined to skip out on the Fort Louisbourg trip, but I won’t. I was advised that it is worth the time. 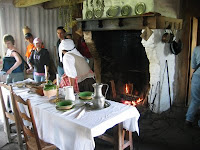 The rebuilt fort is pretty amazing, in fact. Almost every building has a reenactment actor to explain the structure and its historical significance. I was particularly impressed by the engineer’s quarters and the tens of thousands of documents he turned out in his 20 period at the job. His documentation, kept in triplicate at the fort, in Quebec City, and in France, was what allowed the Canadian government to rebuild the fort accurately. The engineer’s house and the many improvements he made to the fort put most of today’s engineers to shame. His auto-barbeque-spit was freakin’ amazing. I need one for my barbeque. His office, home, and kitchen were inspiring. His layout for the city inside the fort should be a standard study for modern city designers.

I was feeling pretty good about the position of engineering in the past (3rd on the fort’s totem pole) until I arrived at the “accountant’s” home (2nd on the pole). This example of pre-MBA evil managed to screw France out of $80 million during his rein of incompetence. The entire fort cost the government of France less than $4 million. As an early ENRON-style carpetbagger, he probably managed to screw France out of a substantial portion of the New World all by himself. When he was finally “punished,” he received a pat on the hand and was banished to the south of France with only half of his stolen money and property. France put away the guillotine way too soon. So did we. The definition of “treason” ought to include any politician or bureaucrat ripping off the public till and the penalty should be the firing squad.

The fuel and economic damage really shows in outback places like this. Obviously, Canada and Nova Scotia built this as a major tourist trade attraction. It provides lots of employment and significant support for the area, when it is working. The outgoing bus I took from the center to the fort was about 2/3 full. A guy I met at the coffee shop, before heading to the fort, turned out to be my ticket taker. He said the fort attendance was down at least 50% from previous years. I “business” would be laying off, bigtime, now. My return bus, at noon, held only me. I had no trouble taking shots of the fort that weren’t obstructed by other tourists. This can’t be the intended plan. 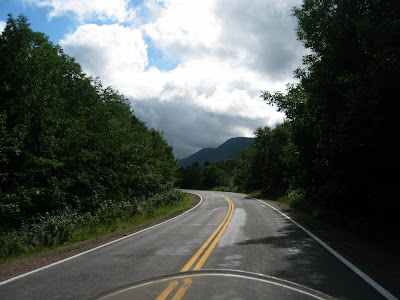 After that experience, I decided to go back to the road. I headed for the Cabot Trail and the solitude of ocean, road, and mountains. Several bikers told me that if I came all this way and missed the Trail, I missed Nova Scotia. So, I’m on that road and it is kind of a mini-mountain road with occasional great views of ocean from beaches or cliffs. This, of course, is what my wife would have loved to experience. She wouldn’t have liked much of the ride here, though.

Crossing from the main island to the cape, I got a dose of rain. It fell hard enough that I stopped to put on my over-gloves, but it stopped almost immediately. All the way to the top, I had great weather, great scenery, and a wonderful ride. My luck held all the way around Cabot Trail. I saw some clouds, a little mist, even some fog, but no rain. It was, in fact, a nearly perfect day on the road. I could have stopped a lot more. In fact, I could have parked the bike for a week and walked most of the park and it wouldn’t have been enough time.

This is where Nova Scotia gets its name; New Scotland. It would be easy to imagine these hills populated by sheep and herders, denuded of their trees and covered, instead, with grazing. It would be a shame, but not unbelievable or unlikely. As Robbye said about the rest of Nova Scotia, it’s obvious that not much of this forested area is old growth. Most of the pines are well under 20 years old, in fact. I have seen absolutely no large, old trees since I entered Canada. Canada has lots of things going for it, but conservation is not one of them. For such a small population, the place is highly industrialized and the ecology is “farm land” to the inhabitants.

I came out of Cape Breton wanting to cover some miles before I slept. So, I stayed on the gas through a variety of attractive towns and likely campsites. After suffering a long road maintenance wait at Antigonish, I decided to make New Glasgow, at least, before stopping. The stop-and-go traffic after that half-hour wait caught me mentally napping. I spent so much time in 5th, passing slow moving trucks and SUVs that I spaced off shifting back to 6th when I had the chance. I had plenty of fuel when I left Antigonish to make it to New Glasgow, but that assumed I would be using my transmission competently. I didn’t, so I found myself about 20 miles out of town with the fuel gauge flashing at me. I nursed the throttle, coasted down hills, and gasped into town with my tension level at stupid.

That was enough. I needed a place to camp, or plan on riding all night long. I asked the station mechanic for advice and he sent me to Trenton, a town about 5 miles back from where I’d come. His directions involved a lot of well known landmarks, none of which were known to me or visible at night. I made it to Trenton, stopped at a Tim Hortons and asked another local for directions. He used even more landmarks, no street names, and got me within ½ mile of the park. Finally, I hit a dead end in a trailer park. Some kids came out to ask what I was doing making a u-turn in their front yard. I explained my quest and one of them volunteered to put on a helmet and direct me to the park. Turns out, “follow the highway to Park Street, turn right until the street deadends into the park” would have done the job, description-wise.

The Trenton city park was closed, but the caretaker told me to find a spot and I did. Bits of my Lawson hammock are beginning to fail on this trip and one of the poles bit the dust tonight. Duct tape “fixed” it temporarily, but I’ll need a new pole or a new tent sometime soon.

I went to sleep to the sound of partying teenagers and frustrated mosquitoes.
Posted by T.W. Day at Thursday, August 14, 2008