Today started evil and kept at it until I parked. Parking was good. Everything before that was questionable.

Scott and I spent the night foolishly looking for a motel room to split. At 2AM we stumbled into a park and thought about tossing our sleeping bags on the ground until the cops rousted us. A local pointed us to a city campground across the street and at 3AM we attempted to setup camp. Scott did pretty well. I managed to screw up my hammock knots and found myself sleeping half on the ground in the morning, at 6AM.

Tomorrow ought to be a nothing ride. I’m going to ride to Alexandria Bay and sit on a cattle boat around the Thousand Islands. However, today we rode/drove from Owen Sound to Toronto to Black Lake, NY. The first part was a little boring. I had no idea that Ontario could be so much like Kansas-Nebraska, including flat, boring terrain and corn fields by the miles. Toronto started off interesting, great skyline, and turned deadly. I’d heard that Toronto was Canada’s New York, but it seemed a little more like Dallas (or Chicago without the lousy municipal workmanship). Traffic was very much like Chicago, braindead and fast moving. I followed Scott to the riverside and skipped out on him when he turned west on Lake Shore Drive. I went east. I was entertained by the diversity and the shops for about five miles. About the time I passed Ontario Place, the filthiest park I’ve ever seen in my life, I decided to bail on Toronto. Getting out was harder than I expected, though. The city has damn few freeway entrances and lots of loops and frontage roads to nowhere.

When I hit the freeway, finally, I found I was in Tailgater Heaven. Toronto drivers are every bit as foolish as the worst US city drivers and no more skilled. I stuck with the freeway all the way to Kingston, though. I tried getting off and checking out the river roads, but they were lined with dead industrial towns and way too many cops for my wallet’s safety. It was one of the most miserable 200 miles I’ve ever ridden and I felt like crap the whole way.

I crossed the boarder a little past Kingston and headed for Gary and Lee Hill’s Indian Head Point Resort. Gary is an old fri 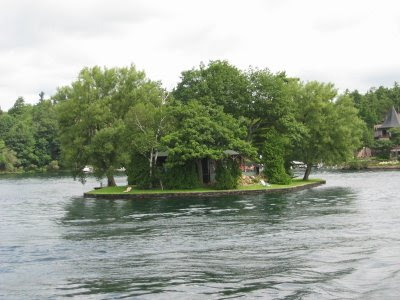 end of Scott’s and they’d foolishly offered to put us up for a couple of days. I wanted to tour (by boat) the Thousand Islands and after the miserable night we spent before a good night’s sleep sounded awesome. Gary and I hit it off pretty naturally and ended up talking politics, tree hugging, economics, music, and business until late. Lee showed up about 9PM and joined the debate until about midnight. Showing more intelligence that Gary or I, she bailed for bed. I don’t remember lying down, but I woke up Monday morning feeling human again. I can’t vouch for my appearance.

This is a spectacular place. Completely different than my expectations of New York, upstate or any state. Gary and Lee have built an amazing resort that is an escape from any where you might want to escape from. This feels more like Oregon or Wisconsin than New York.