About half of the time, when I need to install a new tire, I bum an hour from Paul Streeter and do the deed in his nicely heated basement shop. We drink a couple of beers, I use his bead buster and tire mounting frame, and the tire gets changed with minimum knuckle busting. I made a bead buster of my own, last year, after one of those trips to Paul's and it works, but it's ugly and less than super-stable (at right). As you can probably see, it was made from wood scraps and pieces of metal I found lying around my shop. Every other time I use it, I end up slightly re-fabbing it because it wasn't that strong. It works, but it wasn't pretty, reliable, or fun to use.

So, this weekend, when I needed to pop a new tire on the V-Strom, I did a quick look around the internet for tire tools and was disappointed with the price tag, again. Until I hit this discussion from a biker blog: New Tires. Why the Hell is it so Hard to Get New Skin on a Motorcycle? In the Comments section of the blog entry, a few of his readers started talking about tire tools and bead busters. The consensus was that the No Mar ($665) or Cycle Hill ($465) tire changers are the hot ticket, with a low budget unit from Harbor Freight ($29 on sale) being a non-serious alternative. 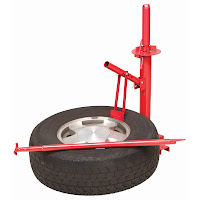 I decided on the $49 Harbor Freight unit. You are surprised, right?

It's not really a motorcycle tire tool, but the bead breaker is a lot more solid than the one I built and almost exactly the same as Paul's. So, I trotted over the Harbor Freight in Minneapolis and pulled the box for the tire changer out from under the bike work stand (on sale for $465 this week). It's heavy and clearly more suited for car wheels than bikes. So, I wandered around the store, thinking about where I would be putting this monster in my beloved garage. If there was a practical way to use the wheel holder (the top) of the tool on a motorcycle wheel, it would have been a no-brainer purchase. However, there is no simple way to make that work. Fifteen minutes later, I decided I just didn't want to commit the storage space and I almost walked out empty handed.

Then, I saw Harbor Freight's "bead breaker" tool; $44. Not only is it a lot more like a motorcycle tool, but it's smaller, lighter, and more suited to the kind of rim and disc brake guard design I had in mind. So, I disassembled my home-made unit and tossed the wood bits into the fire box and set about assembling my new bead breaker. Ten minutes later, I'm ready to pop a bead.

Off comes the V-Strom's back tire, and, a bunch of cobbling with boards and foam for the "No Mar" effect, and the tire is off of the rim. My tire mounting stand is just a metal bench with a heavy vise. I stick a 5/8" bolt in the vise and slip the tire over that to give myself leverage to tire iron the tire from the rim. The same jig helps put the new tire on the rim. I turn the bolt sideways and spin it a few times to "balance" the tire. A couple of wheel weights and the new tire is on the bike.

Since Paul wasn't there to remind me of the usual 17 things I forget to do when we're drinking beer and playing with tires, I didn't drink a beer until I'd test ridden the bike and new tire. For a change, I didn't put the tire on backwards the first time. I could not, as usual, find the damn dot, so I have no idea how Bridgestone intended the tire to be installed for balance.

I'll be in less of a hurry next time and I'll make my "no mar" modifications permanent. When that happens, I'll include a picture. 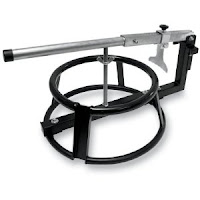 Poststript: A while after I bought my tool, I stumbled on to the Motorsport Products Portable Tire Changer with Bead Breaker (#70-3002). This looks like a really great garage/racetrack tool for the money (about $70). I'd be a little irritated by having bought "the wrong tool" if this gizmo didn't give me a great idea how to modify the tool I have.