More to this Story? 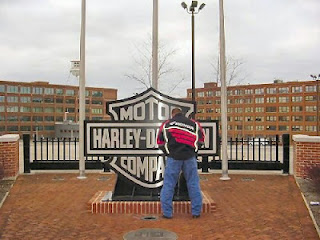 A friend sent me this photo yesterday. Obviously, I'm not a fan of H-D's, but I don't want this picture taken "wrong." I'm not endorsing pissing on the company sign or the company's fans. I'm not much of a fan of any corporation, Honda included. The institution in general is psychopathic and one of the dumbest ideas the Romans ever stuck on humanity. That's saying something. The Romans were practically a waterfall of dumb ideas: slavery, inherited power, endless foreign aggression and never-ending war, overwhelming debt, and cultural moral decay. (Sound familiar?) The fact that the pope was one of the first British corporations says more to me than I need to know to dislike incorporation and, no, Millard, corporations are not people.

I'm assuming this sign is in Milwaukee. I have been to that city a few times, the last on a fruitless attempt to interview Eric Buell. Honestly, the place depresses me. It's a Rust Belt city with special emphasis on rust and poverty, with a few pockets of the filthy rich who are more depressing than poor people. I can't remember any part of the city looking as clean as this picture depicts. My wife's big complaint with the rich and corporations is that they are people who don't "pick up after themselves." I don't think anyone picks up after themselves in Milwaukee. It's like LA, New York, Chicago, Atlanta, Miami, or any number of places where people work and sleep, but almost no one lives.

It wouldn't be hard for me to be a Harley hater, but I'm agnostic on the concept (among other things). When Harley partnered with Eric Buell, I really wanted to like the company. When they shut Buell down and played Millard Romney with the future of his company, I very nearly hated HD. I'm sure some Italians feel the same way about how HD mishandled MV Agusta. Italian laws made it impossible for HD to trash the remains of MV, though. We don't have much in the way of law that protects workers from predatory corporations, so HD was free to toss Buell's products and workers into the trash can. I still believe that will come back to haunt HD as the braindead Boomers head into the sunset on their Hoverounds. But, I've been wrong a lot in predicting the future. I don't get Young Republicans and I don't get young people and  primitive, historic, slow machines.
Posted by T.W. Day at Wednesday, September 19, 2012