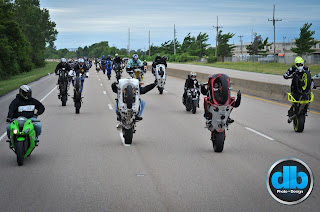 Sunday morning, Sev sent me a note too look into the Streetfighterz Ride of the Century "event" in St. Louis. He joked, "Do you run the obvious "pirates on hippobikes" angle? Or do you go with the 'cops hassling innocent riders based on vehicle choice' angle?"

My first take was, "Looks more like spoiled children having tantrums on crotchrockets. I'm starting to think there is no such thing as 'innocent riders.'"

Take, for example, me. After plowing through the news, my French class homework, and way too many questions from my wife about her father's idiot (or idiot father's) financial mess, I went riding on the WR on the dirt roads north of White Bear.

About dusk, I managed to discover a rural rich person neighborhood that was a collection of wonderful dirt roads, that looped on themselves, ended up in deadends, and made about as much sense as downtown St. Paul. I was having so much fun tearing around the roads that I got lost and spent even more hooligan time struggling to get back to county road 7. I was a long ways from racing, but I was a good distance from plodding, too. Toward the end, I was getting a little frustrated with the endless loop neighborhood and I admit I was wicking it up a bit beyond my normal pace. I missed the escape turn twice, which cost me a couple of "laps" around the rich folks road and the last lap might have been my record time.

Back on pavement a few miles east of that neighborhood, an HP car came ripping down the road, swung a U-turn and came sailing after me just as I'd turned down another dirt road more-or-less heading toward Taylors Falls. He didn't hit his light, but I stopped when I saw him coming up behind me. He got out, took a look at me, now without my helmet and clawing at my key holder to get at my insurance info, and said, "I had a report that some kid was motocrossing a neighborhood. You probably weren't him."

I kept my mouth shut (Fuck you Sev, I can do it when there is a gun in the mix. And the gun isn't mine.) and waited for him to tag me or leave me alone. He left me alone. I went back to sliding my way to Taylor's Falls and came home back the same way, although a lot slower because it was dusk-to-dark.

The "moral" is, look as old as possible and cops don't take you seriously. I'm getting that trick down pat. Every day, I look older than the last.

On the way out, I was on a short but cool piece of asphalt with several 90 degree, 15mph curves when I about did a Victor (Victor put his BMW down hard coming home from work a couple of years ago. All he remembers about the incident was riding and not-riding. It happened that fast.) I hit a patch of oil or french fry grease or something equally non-traction'y and the bike went totally sideways and when I put my left foot out it slid just as friction-freely as my tires. Ice would have not been slicker. I didn't get a bite of traction until the back tire was in the gravel on the shoulder. A couple more feet and I'd have been slammed into a 3' deep ditch, $50k ass cheek down first.

Two things I learned from that experience: 1) my new leg is stronger than my old leg, because I can now hold up the bike with a foot out and 2) if I crash and die the cops will say "he made no attempt to stop" because there were no skid marks on the way to the ditch. The only sign I left was a couple of grease lines and some torn up grass on the shoulder.

Later, I avoided a group (herd?) of young deer with hard braking and no sliding on loose gravel. (Lots of deer and turkeys on the roads, BTW.) Clearly, I do not know how to lay 'er down. Again, the "evidence" police use to prove or disprove driver/rider attempts to slow or change direction would be absent.