All Rights Reserved © 2012 Thomas W. Day
Aerostich, the pioneers of Hi-Viz gear have taken to heart the old marketing wisdom, "sell them what they want, not what they need." The company's newest product is the Stealth Roadcrafter One Piece; "the power of the dark side is strong in this one...a bad-ass riding suit that has ridden more, traveled farther and saved more road rash and broken bones than any other textile riding suit. Entirely black, even the label." For $997 ($100 more than a regular Roadcrafter, including Hi-Viz versions), Aerostich has removed the "distinctive 3M Scotchlite™ reflective" bits and created a black-on-black-with-black-highlights riding suit for riders who don't want to be seen unless they're seen as being cool.
I understand the logic. We're in a rough economy and we're going to be here for a while. Maybe, the rest of my life. Motorcyclists are an aging group and our favorite vehicle is becoming more toy and less transportation. The Village People are the majority U.S. market and they barely wear gear at all and wouldn't consider Hi-Viz or even neutral colors because their peer group would consider anything resembling AGAT to be treason. Logic and good sense aside, the Stealth Roadcrafter is seriously sexy looking. At least, in enough light that it can be seen at all.
I get Aerostich's reasoning for this product. I don't like it, but I get it. I imagine it sticks in Mr. Subjective's craw as much as it does mine.
My own experience, especially recent experience, begs to differ with common wisdom and stylish trends. I lucked into a prototype Aerostich AD1 Darien jacket at the Aerostich Garage Sale last spring. Mostly because it fits me perfectly and was as comfortable as an old glove from the moment I tried it out, I wear this jacket everywhere. Before the AD1, my only serious nod to Hi-Viz has been my helmets, which are decorated with tastelessly applied reflective tape and are either white or yellow. I don't put n excess of hope in visibility, but I know that light travels almost 900,000 times faster than sound and any edge I can get might have some life-saving value. 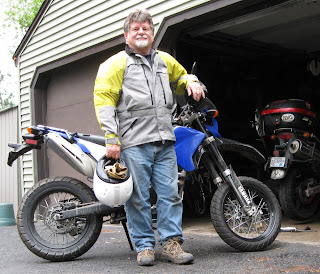 On my usual commute to downtown St. Paul, I was stuck waiting for a break in Rice Street traffic at my neighborhood intersection. To the north, I had about a block-and-a-half of space before south-bound traffic boxed me in. To the south, one large, black van was signaling a turn at my intersection. Behind it, at least another two blocks of clear space. Not trusting the van to do what the turn signals indicated, I waited until the van was beginning its turn before I eased out into the road. Hidden from my view was an asphalt-colored sedan, tailgating the van. The van's blacked out windows and size had completely obscured my view of the tailgater and, now, I was solidly in the car's path. The driver hit the brakes and I nailed the throttle and we missed each other by a few feet. The event was close enough that I can still raise a little bile several weeks after the near-crash.
I have been on two-wheels for almost 50 years and I can't remember ever coming that close to becoming a statistic. I split-lanes in California traffic for a decade and 200,000 miles. I have crossed the country several times, ridden through crazy Tijuana, Mexico on my way to the southern end of Baja, and found more ways to fly off of an off-road motorcycle than Harley parts, but I do not believe I have ever been that close to getting squished and busted into pieces.
Unless you are so committed to the "loud pipes" delusion that you can ignore all aspects of physical reality, it should be obvious that no amount of noise would have been useful in this situation. First, I was incredibly lucky that the cager saw me at all, let alone did a pretty impressive job of reacting. Second, getting seen was key to the happy outcome of this moment. There is a lot of grey on this jacket and my riding pants (also Darien AD1's) are black, but a good bit of the jacket is Hi-Viz yellow. I can't count the number of times I've heard "I could see you a mile away" when I've worn this jacket around town.
My original Aerostich gear is road-surface grey. I loved that suit and still wear it when I need extra room for insulation layers. (I've shrunk a little since that purchase.) I have a cool denim riding jacket with MMM's logo embroidered on the back that I like a lot. But until I get over nearly becoming road kill, I probably won't consider going back to drab colors in town.
Posted by T.W. Day

This year will be a benchmark to look at for years. Lots of loud pipers with no gear have crashed, burned, and died in 2012. Legislators are going to be looking closely at this data in the upcoming transportation budgeting hearings.

We've had both loud pipers and squids crashing and dieing around here just about every week all summer long, plus quite a number of squids getting arrested while doing speeds of up to 178 mph in one case. One guy was doing over 140 with his girlfriend on the back. The papers dutifully report that the "rider was wearing a helmet" and still died. Duh, it's the law here, so I can't imagine many could ride far sans helmet without getting stopped. A couple of sad ones where the rider just bought the bike and then went out and killed himself. Then there was the woman run over by a truck at a stoplight because he couldn't see her over his hood. Plenty of dumbness to go around.

The only two infinite elements in the universe are hydrogen and human stupidity. Most of the crashes I've read about are caused by riders doing something incredibly dumb or unskilled. As a species, we are our own worst enemy. As a sub-group of traffic, we are practically suicidal. Even as small a portion of traffic as motorcyclists are, I suspect that far too many motorcycles are being sold to people who have no business being behind a wheel, handlebar, or maybe even wearing shoes.

Yes! Finally something about nudist.