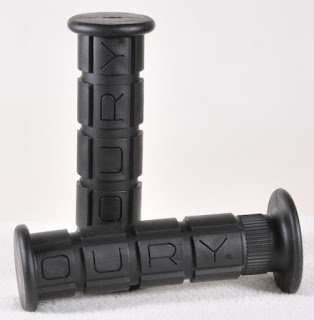 There aren't a lot of products that I have used for decades, but Oury's Road/Street grips are in that group. I can't remember when I discovered this product, at the least I had a pair on my 1979 Honda CX500 Deluxe and have been using them since sometime in the mid-80's. Being the creative guy I am, I buy any color option (black, red, blue, brown, light grey) as long as it is black. (Although, now that I've seen brown, I might try that out.)

These things have been around for years, at least since 1983. Developed by ex-pro motocrosser, Bill Oury, the company began developing these "vibration damping grips" in the late-70's and in 1985 offered their iconic Oury Pyramid grip shape.That must be about the time I started using them in California. They are the only grips I've used since.

I've had the Road/Street grips on my dirt bikes, my road bikes, and my bicycles for so long that anything else feels wrong.
Posted by T.W. Day at Saturday, September 15, 2012