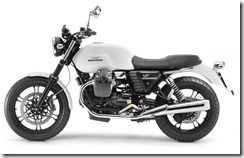 A friend sent me a link to his next dream bike: a Moto Guzzi V9. His comment was “I like the idea of bigger motor w/ more hp to replace the V7.” If you haven’t seen the V7, there’s a reason for that: it is a kinda silly Euro-trash product that can only be spotted in US major urban centers. At $10,000 for an underpowered, barely unsupported Sportster-style 750, you have to be a fairly committed hipster to even consider owning one of these things. As a motorcycle, it’s a fashion statement that totally evades me. When I mentioned it to a friend who is a daily rider, but who isn’t particularly connected to the motorcycle culture or a moto-journalism reader his comment was, “Is Moto Guzzi still around?” They are and the next obvious question is “Why?”

Of course, I’ve been asking that question about the myriad of US cruiser manufacturers and Japanese clones for the last three decades. More accurately, my question has been,“Why the hell are these people making these stupid bikes and why are people buying them?” Believe it or not, I think there is an answer. It’s not an answer I like, but it appears to be as close to the truth as a short essay can describe. 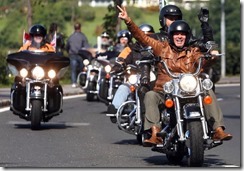 In an email conversation about the motorcycling economy (or lack of one) Andy Goldfine explained this stuff to me a couple of weeks ago in a way that makes demented sense. His take is that US motorcycling has become a “reenactment activity,” like Civil War reenactments or Renaissance Festivals. Like it or not, that explains the desperation from the biker bunch and their pitiful rebels without a cause group angst. It more than explains the cobbled-up Eurotrash-revival of hipster cafe racers and scramblers. It even goes a ways toward explaining the whole vintage Japan nuttiness. While riding for transportation appears to be a vanishing habit, dressing up like a 1910-55 motorcyclist is a "thing." 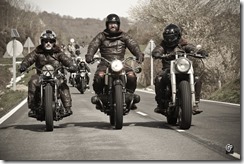 In his book, “What’s the Matter with Kansas,” Thomas Frank points to the abundance of secondhand stores as evidence of economic and cultural decay. After reading his book, you can’t help but see the incredible collection of junk stores in the smoking, dead hulk of what used to be the Midwestern “Mainstreet USA.” Likewise, sunny-day recreational riders dressing up like pirates or bankrobbers or 1960’s mods is evidence of the decay of motorcycling. All this posing means there is no real purpose for motorcycles. Like those abandoned Midwestern towns whose only purpose is to house the remaining seven ancient characters who don’t have the motivation, courage, or competence to move to a decent place, these people are saying the only reason to own a motorcycle is as an excuse to play dress-up. The unfortunate fact is that this opinion is the majority motorcycling attitude. 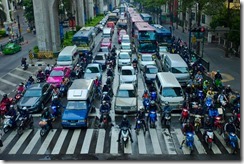 They are, of course, wrong. I’m not going to list all of the should-be-obvious advantages two-wheel vehicles have over cages, but the fact is that we can fill the spaces in any sort of traffic; auto-piloted or otherwise. On a typical American urban street, more space is wasted than used. That is taxpayer money being foolishly spent out of tradition and if anything on this earth has proved to be useless it is tradition.