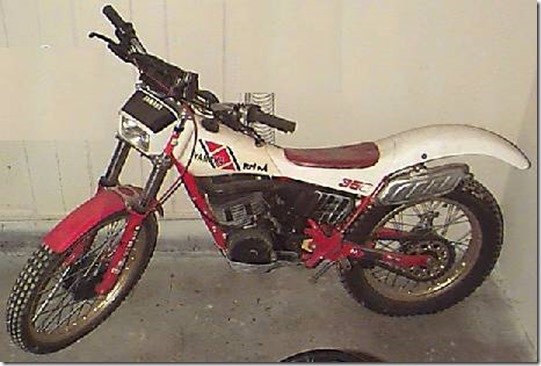 For no good reason, I'd barely used this bike when I gave it up. (Ok, there was a pretty good reason. I’d bruised my right knee badly enough that the bone was beginning to atrophy. My orthopedic surgeon recommended that I buy a crutch and lay off of physical activity for at least a year to let the bone heal. If that didn’t work, I’d have bought a fake knee about 1998.)

I bought it in Colorado, when I thought I might take advantage of the nearby Ramparts Motorcycle Park. I didn't. I moved it to Minnesota, where I built a small trials course in our yard. I'd probably used the bike a total of 20 hours in the six years I've owned it. I sold it in 1998, after wreaking a knee in my backyard (doing yard work, not riding). In retrospect, this was another bike that I wish I'd have hung on to a while longer. At the time, I was told I wouldn't recover from the knee injury and would, probably, end up with a plastic knee. With careful exercise and Glucosamine, I discovered there was an alternative. Almost ten years later, my knees are fine; better than they were when I was 30, in fact. Now, I wish I had a trials bike.

If I'd have had a bike like the TY350 when I was young and actively riding trials, I'd have loved the sport much more. Since I had the RL250 at that time, I learned to love watching trials but sort of lost the drive to do it myself. After the knee injury, I let the TY sit in the garage, untouched for three years and, on a half dozen kicks, it fired up and ran like someone has been taking care of it all along. I bought a new rear fender and a pair of half-decent air filter elements, which brought all of the TY's pieces up to decent standards. When I sold it, the bike looked great, ran strong, and started on the 3rd kick on a 35F day, once again after being left unattended for months.

Its old fashioned drum brakes aren't up to doing modern trials tricks, but they worked well enough for a plugger like me. The TY350 seems to be indestructible, based on the abuse I'd given it, something I'm definitely not. I needed a time machine and 25 fewer years on my joints. The engine is obsolete, a throwback to the slow rev'ing, high torque days of trials engine design. The bike is way over-weight, by modern standards. The engine didn't rev instantly, launching the bike up a vertical incline like a wheeled cougar, but I could putt up my backyard pile of rocks with confidence. The brakes weren't 1-finger tight, but I could control the TY350 on a downhill slide into a creek bed.

The suspension is equally backwards. However, all of the parts worked together pretty well. I might never be able to hop a trials bike, but I could get over a 4' tall log. With all that, I might have been a half-decent novice rider on the TY if I'd have known I'd be getting my knees back.