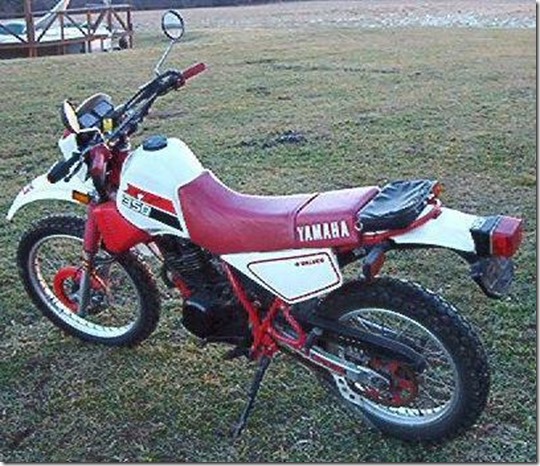 Again, a bike for which I've had to steal a picture. This pic is pretty much exactly what my XT looked like, dead stock. However, if I’d have found a 2000 XT it wouldn’t have mattered. Other than color changes the 2000 is not even a little bit different than the 1986.

I owned my XT for 6 years and loved it for most of that. The TDM and my old age finally eliminated my need for the bike and it sold for what I'd paid for it. XT's don't show up, often, for sale because they're such terrific bikes.


In California, I watched for one for two years, when I found it I got into a bidding war with three guys who hadn't even been out to see the bike yet. I was the winner because I was there with cash. When I sold mine in 1995, I was on the other end of the same situation in Colorado.


I used my XT, mostly, for commuting in Southern California, along PCH between Costa Mesa and Long Beach. Because California drivers are practically talentless and most are mental cases, I wanted a bike that could jump off-road without hesitation. The XT suspension could take a curb as well as most bikes can roll over smooth highway. I can't guess how many times I left the road and ran for the safety of someone's front yard, while commuting to school in Long Beach. I watched as two to a dozen cars, then, piled into each other, burying the spot I'd vacated a few moments earlier. Once, I decided the air must be too thin for the average Californian's pollution-damaged brain and I rode nearly five miles on the sidewalk paralleling PCH. The place is a nutbin, but the XT350 was my way to escape joining the wacko bloodbath.


The other great advantage was in parking. CSULB would let me park my XT by the bicycle racks. I could practically ride up to my classes and step off the bike into my classroom.


Being a lazy bonehead, I allowed a little tuning to get between me and using the XT regularly in Colorado. Moving the bike, which was perfectly tuned in California, to Denver resulted in major jetting problems. The XT always ran way too rich in Colorado and a trip to Ramparts highlighted how far away from prime the tuning was. I had a miserable weekend trying to keep the 350 running in the 8,000 foot altitude of the motorcycle park. I couldn't even keep the other guys in sight, while I fought stalling, loading-up, and the other symptoms of a super-rich fuel-air mixture. Locally, I got some terrible jetting advice from the Yamaha Aurora shop and the twin carburetor low/high rev system defeated me. Out of disgust (mostly with myself), I quit trying to figure out the bike and sold it. The moment my buyer loaded the XT on to his truck, I knew I'd made a mistake.

For almost a decade, I watched for a replacement, even an exact replacement, for almost 15 years nobody appeared to be getting rid of their XT's.  I wish I'd have never sold the one I had.  Finally, the WR250X came along and wiped the memory of the XT’s brilliance from my mind.

Email ThisBlogThis!Share to TwitterShare to FacebookShare to Pinterest
Labels: my motorcycles, xt350, yamaha