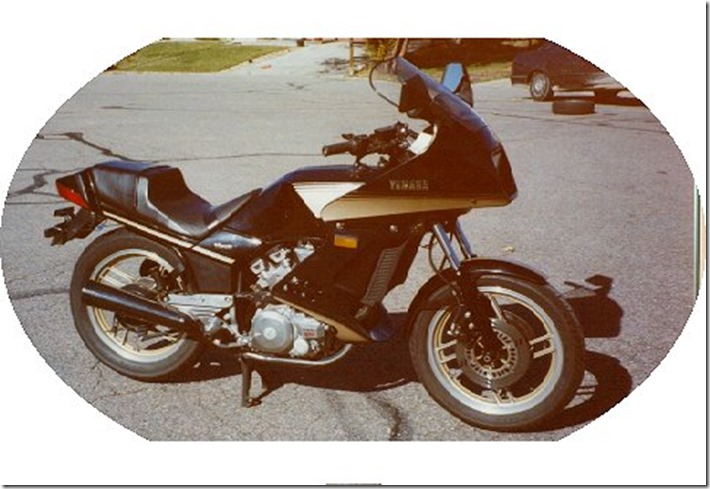 Like the '82, this Vision was a great bike. For some reason, the '83 Vision didn't sell at all in CA until 1985. Once they left the showroom floors, you couldn't find one, anywhere. I watched for an '83 right up till I found one in 1988. I bought the bike, rode it for my last three years in CA and took it with me to Colorado.

The '83 was an especially terrific Colorado touring bike, the fairing's heating system added about two months to my riding season in that state. While friends were hiding in their cages, I rode for all but about two months of the first two years I was in Colorado. The fairing provided great coverage, some storage, and the heating vents worked so well that I can't figure out why more bikes don't do it. The Vision was way ahead of its time. Too much vision?

The only downside to the bike was that the added weight of the fairing seemed to overwhelm the brakes, slightly. The '82 Vision had strong, positive feeling front brakes. The '83 brakes were slightly mushy and not nearly as powerful. Plus, the front end tended to sag under rough road riding. Still, it was a decent motorcycle and it served me well for more than 50,000 miles.

The Corbin seat (in the picture) was a custom design that I drew up on CAD and shipped to Corbin, along with the stock seat frame). It worked pretty well, but I got carried away with my attempt to lower the seat height and the Corbin slightly cramped the riding position with no advantage. For whatever that's worth, it was a fairly cool looking seat and really comfortable for a passenger.

The Vision was so versatile that I only took my XT350 out of the Colorado garage one time, and ended up selling that bike a couple of months later. If the TDM hadn't come along, I might still be riding the '83 Vision. I can't say enough about what a great bike this was.

I put about 50,000 miles on the '83 before selling it to a guy who came all the way to Colorado from Southern California (in the winter) to pick it up. It was still in great shape and ran flawlessly. The guy didn't even want to test ride the Vision. I started it for him and we loaded it into his truck and away he went. I took this picture a couple of days before it left my life. I didn't want it to escape my memory the way the CX500 and others had. The new owner seemed more interested in the stock seat I'd kept in like-new condition, so maybe he was more of a collector than a rider or could see that the Corbin had some design problems.