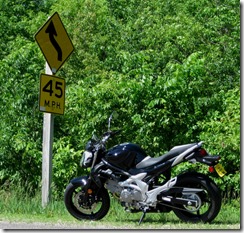 For the record, a "gladius" is a "short, thrusting [Roman] sword . . . designed both for thrusting and for cutting in close-in combat."1 The Suzuki Gladius is a short (56.9" wheelbase, 30.9" seat height) Japanese motorcycle designed for thrusting and cutting through urban traffic combat. A goofy name doesn't define a bike; unless the bike is a Drifter, Rebel, Virago, or Valkyrie. The Gladius is not a goofy bike.

At the peak of the big-assed cruiser boom In 1999, Suzuki broke ranks with the me-too crowd and imported a radical (for the US) new aluminum-framed naked standard; the SV650. The SV was a huge seller and a raft of competitors from Honda to Ducati hustled to create models to compete in the larger-than-anyone-expected mid-sized bike business. Over the years, the SV grew a partial fairing, traded it's pretty oval-tube trellis frame for a new square tube truss frame, added fuel injection, put on a full fairing, added ABS brakes, and that great motor got better every year. For the current evolution, many of the new upgrades to the 650 twin power plant are only available on the Gladius, which may be saying something about the future of the model.

I have a 29" inseam and I didn't have any trouble swinging a leg over the Gladius' 30.9" seat height, even after a day of riding or a miserable day of yard work. Once on the bike, I'm on the balls of my feet with both feet on the ground. Suzuki worked hard to make the Gladius' profile as narrow as possible. That makes for a bike that could be right for a variety of riders. The peg position is almost straight down from the rider's butt and, since the pegs are about 17" from the seat, that means your knees are bent into a sportbike angle. The riding position is similar to the Kawasaki ER-6n or the Ducati 696 Monster and the styling is similar, too.

The steel-framed Gladius is only 8 pounds heavier than the aluminum SVS, which is a pretty impressive feat. That light weight shows itself on the road. Steering is tight and precise. The bike is a point-and-shoot device. Think where you want to go and it will take you there. At speed, the Gladius steers quickly and easily. The low speed turn radius is a little on the wide side, but getting stability out of a short wheelbase requires a sacrifice or two. The suspension is stiff, but it limbered up after a 100 miles or so. Over some pretty rough Minnesota 2-lanes, a little leg lift from the seat was all it took to smooth out those messed up roads. The 17" Dunlop Qualifier tires were a pleasant surprise. Like most sportbikes, the SFV handles so well it makes you want to be a better rider to deserve the bike you're riding. I am incapable of riding this motorcycle hard enough to take it to the edges of its capabilities. 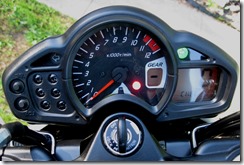 The remarkably compact Gladius console has two buttons, 6 idiot lights, three digital displays, a tachometer, and right-left turn signal blinkers. The four idiot lights on the left side of the console are for fuel injection status, neutral, the two-way low fuel warning light, and the bright headlights indicator. There are two idiot lights in the tach housing: the oil pressure sensor and water temperature warning which combine with oil pressure/water temperature LCD icons for more useful information. There is a gear position display in the tach housing. The digital speedometer can be set for miles or kilometers. The odometer display doubles as a fault display for start-up and the fuel injection. That same counter can be set to display a clock, the two trip odometers, and a reserve fuel odometer, which starts recording distance when the low fuel warning trips. 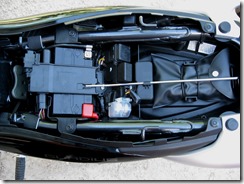 This might be the first Japanese sportbike ever made with a well-designed seat. The seat platform is extremely light and the padding is thin and firm, but it was reasonably comfortable for a long day's excursion. I probably wouldn't cross the country on a Gladius, but a day's ride to Duluth and back was enjoyable. On the other hand, the passenger seat appears to be an afterthought, as it is on most sportbikes. There is a little bit of room between the seat and fender compartment for gloves, maps, or more tools. The base of the seat hides a pair of straps intended for cargo loops, a nice feature for a commuter. 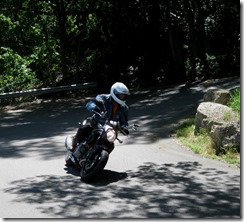 The 6-speed transmission is so smooth that it practically shifts itself. The cam-operated clutch is light and predictable; at least as good as the best I've ever experienced. That thoughtful engineering is something of a waste  because the DOHC 90-degree V-twin engine is so strong that three gears would probably have done the job for most riders. You can enter corners in just about any gear you choose and still get out with plenty of power. Suzuki has put a lot of engineering into the 39mm injection system to provide reliable cold starts, stable idle operation, low emissions, and smooth power delivery.  Suzuki's race-tested SCEM cylinder liners should extend the motor's lifetime dramatically. In 6th, at 5,500 rpm, the Gladius is running at an indicated 75mph; redline is at 10,500 rpm. The bike is smooth right from idle and was strong from 3500 rpm up. A critical commuter concern is efficiency. I estimate that Molly and I got about 54mpg for the test ride, assuming the tank was full when Bruce picked it up. My last fill-up burned at an impressive 68mpg and I didn't make any effort to be conservative once I passed the 500 mile mark on the odometer. The 3.8 gallon fuel tank ought to give the Gladius close to a 200 mile range. Suzuki seems to have figured out how Harley and Ducati get away with macho-sounding exhaust systems and still skate under noise restrictions. The exhaust note is mostly bass-frequencies, exploiting the EPA's A-weighting spec and making the bike sound larger than a 650. The under-engine catalyst and fuel-efficient dual-plug design puts the Gladius into the EURO 5 emissions territory without a fresh air injection system. 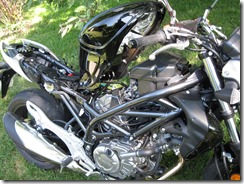 At highway speeds, the mirrors are practically vibration-free and they are positioned so that they actually show you a rear view. The raptor-looking headlight is seriously good. The 55W low beam is wide, short, and bright; illuminating the road and close to 180o of the path of travel. The 60W high beam retains the near-field qualities, but extends the illumination distance three-to-four times with the extended light focused in the middle of the highway. This combination of good lighting and an unobstructed view of traffic in front and behind the rider, makes for an exceptional commuter bike.

Parked next to my V-Strom, the Gladius looks tiny.  Some motorcycles don't photograph well. Practically everything from KTM falls into that category. Most Ducs look clunky in two dimensions. The Gladius may be one of those bikes. I'm not a fan of the blue and white color combination, but even the pictures of the red and black version didn't do much for me. In the flesh, the Gladius is a pretty cool looking bike. It got nothing but compliments from everyone who asked about it. The Gladius comes in four color combinations and is designed to be easily customized, by the use of plastic bits     from current and future versions of the bike. The frame covers are about $120 for a pair, the tank side covers are about $220 a pair, and the front fender is $120. Our metalflake-black test bike took a lot of compliments from everyone who checked it out.

For basic maintenance tasks, the SFV is very user friendly. One 4mm Allen wrench allows you to remove 4 side-panel screws, two plastic fasteners, and two tank screws and (thanks the tank prop) you have clear access to the radiator overflow tank, the air filter, fuel injection and throttle adjustments, rear cylinder spark plugs and valve cover, the tank's plastic panel screws, rear brake master cylinder, fuel pump, rear shock adjustments. The only complicated service access on the motor is the front cylinder's center plug, which requires removing the plastic panels around the radiator and lowering the radiator. The oil filter is easily accessible as is the drain plug and filler.

At $6,899 the Gladius is in the same price territory with the Kawasaki ER-6n  ($6,399 MSRP) and Yamaha's FZ6R ($6,989 MSRP). The high end of this genre is the Ducati Monster 696 ($8995 MSRP) and the Aprilia Shiver 750 ($9995 MSRP). I think Suzuki hit the market in an unclaimed spot with the SFV and a lot of riders will appreciate their effort. After a day or exploring Wisconsin's letter roads. I wound my way up to Duluth and ended up parked in front of Aerostich's building. Andy Goldfine came out to inspect the Gladius and was generally impressed. He'd put the SFV on his "short list" of bikes he'd consider as replacements for his well-worn R80GS. Andy described the Gladius as the kind of bike Japan designs for the "home market": refined, detailed, stylish, and extremely functional. That sounds like a well-considered summary of this motorcycle's qualities.

Have I mentioned I love my Gladius. I think they are a love or hate bike and so far I have found nothing I like as much as I do it.

I would agree that low speed turning is a little wide. The turn from lock to lock isn't that far. A friend with a v-strom rode it and like it but commented on that when he parked it.

I replaced the stock shock with a GSXR shock and it makes a difference.

Worst feature is the abrupt on/off fuel injection. It is nice to always have power at the ready though and I rarely use 6th gear unless on the Interstate.

I am surprised they aren't more popular than they are. The price increase for 2013 sure isn't going to help in this regard.