If you're a glutton for punishment, you can learn more about the KLR600. 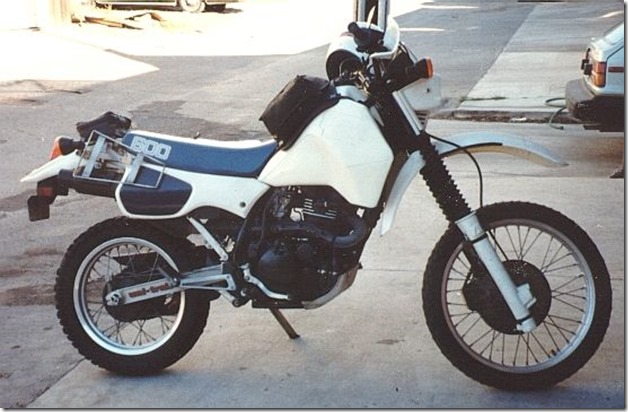 You might be able to tell from all the non-stock stuff on this bike that I really wanted the KLR to be my personal statement about motorcycling. I spent way too much on accessories and customizing the KLR600. When it was all said and spent, the brutal fact remained; this was the worst, least functional motorcycle I'd ever owned. The KLR600 couldn't get out of it's own way. It's only claim to fame was electric start. Otherwise, the bike was a monster loser in every way. In many ways, the KLR more resembled the first Kawasaki I'd ever owned (the 350 Bighorn), than any other bike I've had.

The suspension was soggy, made even more awful by the extra weight the 6 gallon Acerbis tank lent to already pitiful forks. The motor was anemic and easily overheated, even though it was watercooled. The handling was poor on pavement and awful on dirt. Rain grooves turned the KLR into something nightmarish. So did stream crossings. Mileage was a mediocre mid-30's, unless you babied the throttle like you were driving a GM Suburban. The seat height was too tall for comfort while the ground clearance was not much better than the '82 Yamaha Vision street bike it replaced. I could go on for pages. In short, the KLR 600 sucked.

I built the custom, stainless steel saddlebag racks, you see at the back of the bike (just below the "600" on the seat). The design allowed me to use a variety of bicycle panniers, saving a lot of money and adding a lot of options for in-town and touring luggage. It worked a lot better than the bike did.

Our relationship even ended badly. I sold the bike to a German tourist, in Southern California. The kid promptly killed the engine by riding it for several miles with the kickstarter half engaged, trapped behind his leg. When the starter gear seized, it took out a piece of the cases and he ignored that noise just as he'd ignored the grinding of the starter gear. After the engine oil was emptied out, the engine seized and that stopped him.

On discovering that he'd managed to turn his $1,600 investment into a pile of trash, he sued me in small claims court. Fortunately, he was stupid enough to explain what he'd done to the judge, while still expecting me to foot the bill for his stupidity, and the judge laughed him out of court, after giving him a short lecture on the word "used." Still, I wasted a morning of my life and several hours getting ready to present my case. For a while, I thought the KLR was never going to let me escape from its clutches. (pun intended)

Email ThisBlogThis!Share to TwitterShare to FacebookShare to Pinterest
Labels: kawasaki, klr 600, my motorcycles

thats rough.. i love mine. big gun exhaust blows skirts up..its low end makes it torquee off road and fun definitely a work out. but i dont mind it. problems are electrical and it does get hot... over heat though only on 30 plus days

Where did you get the Acerbis tank. I'd love to replace the stock one on mine.

WHO wants that Acerbis tank? I have one that is almost pristine new ...the catch is you have to take the whole bike less running engine ...I bought it for $300 many many years ago I think the whole bike has like 10k miles on it but the guy tried to do his own valve adj and screwed it up, and rather than taking it to a shop he put her on the back burner to fix later and bought a new bike ...later never came and then he got transferred and had to sell stuff including the bike to your's truly...I would sell the tank for $200 and toss the bike in free ....except for engine and headlight ...my email is doughyrax at g mail dot com and I am in southern california ....alternately IF you still have the radiator shrouds I might (MIGHT) trade original tank and shrouds along with cash for the acerbis ...I say MIGHT because I have to think hard whether I want to restore the old girl ... I also have a nearly BRAND NEW 2005 klr 650 engine (purchased from insurance wreck with less than 1000 miles on it!) So IF I can make that motor work in the 96 600...? It would be just as cool with the original tank me thinks ...btw I am in southern california MIGHT deliver to AZ but that would be about it'

I just rode my KLR600 from UK to Kyrgyzstan and didn't have a single problem. I mean, I did ruin the rear suspension at one point and replaced the rear shock. But asides from that, this bike was a beast, never had a mechanical issue and even ended up towing a dr650 250km to a mechanic with no issues at all. I definitely can't give an unbiased review, but had to defend the KLR after reading your post! I actually came here to see how your side frame was - i'm about to build a new rack as old ones just broke and quite liked your design. Would you do anything differently?

The rack was made from stainless steel and it was solid. Since the bike was pretty much a bust for me, I didn't use the luggage feature anywhere near as much as I'd hoped, so my "experience" was very limited. I'm glad your bike worked well for you.

My experience differs from yours as well. I have a 1985 KLR600 that I love, perhaps irrationally. I've ridden it for more than 25 years now and wore it right out, so, rather than replace it, I rebuilt it. Now it has a new piston, re-bore, camchain and a valve regrind. New oil in the shock as well as new chain and sprockets. There is no rational reason to go to such lengths for a 36 year old bike, especially one so unpopular as the KLR 600, but there you have it. Sometimes, a machine just grabs you. The last thing that I would love to get my hands on is green radiator scoops. Mine are black, but I've always wanted green. I've tried to replace this old bomb more than once, but it's always been the "replacement" that gets sold. It's a madness, I guess.

We're all nuts, so nothin' to worry about there. When someone read (maybe all) of my "My Motorcycles" reviews, his comment was something along the lines of "No wonder you've had so much trouble with your motorcycles. They were all crap!" I guess I didn't realize that I've had that many lemon motorcycles, but a few were definitely crap from my perspective, anyway.

I think my expectations for the KLR600 were too high. Luckily, my TDM more than met those expectations a few years later.

I worked at a Kawasaki shop when the klr600 came out. Some of the bikes had a problem with the oil slinger on the back of the flywheel (stator) would come apart and the metal would go in-between cam chain and sprocket and destroyed the engine. The first 600 I worked on had a malfunctioning compression release, kicked back and broke my foot. Other than that I liked them. I almost totaled 1when I looped it over. I have a long history with them bikes.

I have a new to me KLR600 and it got me back into road bikes, wasn't sure about it at first but I've grown to love it. My friend has a new 2022 CRF450RL and the KLR600 seems like the better bike for the Dakota's. I definitely get more ride time and no payment or 600 mile oil changes...

Pretty cool history lesson. Thanks. I don't think my KLR600 could have looped on me if I'd primed the front wheel with a hand grenade. It was the most wheelie-resistant bike I've ever owned. You must be a lot lighter than me. ;-)

I think that is reasonable. The KLR600 and 650 is a good long, straight mile DP bike. The CRF might kick your ass (with the right rider) in the sandhills or off pavement along the Missouri.