Book Review: Zen and the Art of Motorcycle Maintenance: An Inquiry into Values 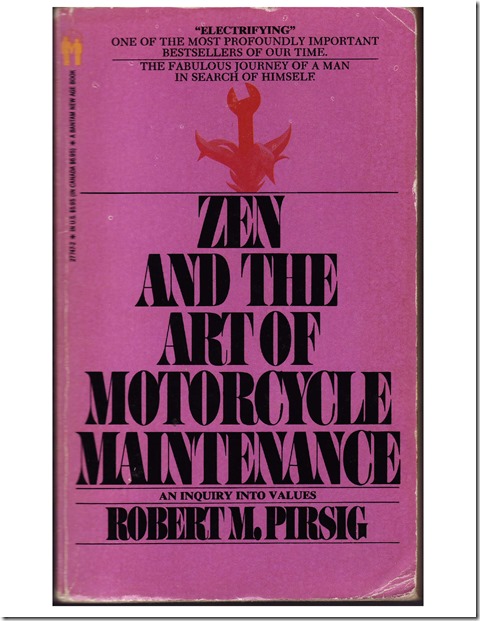 In 2014, Zen (or ZAMM) will celebrate its 40th year in publication. It is one of the best read books in history. Google returns 2 million hits for a search on the book's title. There are dozens of guidebooks for readers: study guides for high school and college students, anniversary editions with introductions and explanations, primers for the less-than-literate, me-too copies, and lots of philosophical analysis. For a book so often despised by academics, ZAMM has inspired an incredible amount of examination and deconstruction.

I have owned a copy of this book since the first year it was published (1974). I have reviewed more than 100 books, several hundred music CDs, and written hundreds of thousands words since I first stumbled upon Zen and, before now, I have never found the confidence or arrogance to write about one of the books that shaped my life. Recently, I found a digital copy of Zen and the Art of Motorcycle Maintenance and was amazed to realize that a popular book published in my lifetime has gone into the public domain. I am probably on my 20th copy of the paperback version of this book, having loaned and lost each of the previous copies I've owned. At the minimum, I've read ZAMM twenty times. For almost forty years, every time I have backpacked into the wilderness or travelled by motorcycle for more than a couple days I have brought a copy of ZAMM for those quiet moments that are the reason I venture into unfamiliar and isolated places. Of the few good things I know, Robert Pirsig and Colin Fletcher (The Complete Walker and many other wonderful foot traveling stories) and John Muir (Keep Your Volkswagen Alive; A Manual of Step-By-Step Procedures for the Compleat Idiot) are responsible for at least 50% of my life's accumulated knowledge.

When someone I respect a lot told me he'd tried and failed to read ZAMM to the end, multiple times, I restarted the self-evaluation experience that always accompanies my exposure to Robert Pirsig's insights; just to see what might make this book difficult to read. When I discovered that all but one novel, Catch 22, from the collection one of the greatest authors of the 20th Century, Joseph Heller, had been purged from my local library system, I felt compelled to write about ZAMM to slow Pirsig's disappearance into the flotsam and jetsam of our trivialized and drug-and-attention-disordered Facebook and Twitter'd world.

When my father discovered my teenage interest in mechanical and electrical concepts, he told me, "Anything you can do for yourself, someone else can do better." When I was a young man, in his "Chautauqua" Pirsig told me, "A motorcycle functions entirely in accordance with the laws of reason, and a study of the art of motorcycle maintenance is really a miniature study of the art of rationality itself." Pirsig's description of the mechanics who botched his bike repair illustrated a world I wanted to avoid, "At 5 P.M. or whenever their eight hours were in, you knew they would cut it off and not have another thought about their work. They were already trying not to have any thoughts about their work on the job. . . They were involved in it (technology and their work) but not in such a way as to care." I knew that the only person who would care about the things I wanted fixed or built was me. Pirsig convinced me that I could learn to do the work.

I grew up in a very religious family and community where "rationality" was avoided whenever possible. I was the family black sheep, green monkey, or whatever label you use to identify and whack the prominent nail. I desperately sought rationality and ZAMM is packed with it from the first to the last page. The confluence of technology, logic, and reason, and the possibility of a career nestled between those concepts was revolutionary. It still is.

Surrounding the practical aspects of ZAMM, Pirsig pursues the concept of "quality." All of us are involved in this search, but many of us are distracted by the sparkly lights advertising uses to convince us that quality is something we can purchase. ZAMM flies against the whole "lifestyle" theory of product marketing. One reason the counter-culture so readily accepted ZAMM is that Pirsig validates the philosophy of questioning authority. From a traditionalist's perspective, Persig's dissection of romantic and rhetoric philosophies was a cold-blooded evaluation of the gaping holes in emotionalism and formal argument. More than a few academics, who live and thrive on emotionalism and rhetoric, fought back from the ramparts of their gloomy institutions while five million of us took refuge in the streets armed with a new way to look for Quality in our lives.

From a hopeful writer's perspective, ZAMM is inspirational. Rejected by a record 121 publishers and selling 5 million copies worldwide, ZAMM is a beacon of hope for authors of all stripes, even though few of us can hope to approach Pirsig's brilliant combination of formal and contemporary style and content. From a life-long student's perspective, Pirsig taught me that in a world full of irrational people, insane cultural garbage, and what seems like universal foolishness, there can be small outposts of rationality and calm. You just have to find them; or make them for yourself. Maybe this is just another version of Dylan Thomas' "Rage, rage against the dying of the light," but ZAMM makes the effort seems more like an attempt to build something than just a rant about death. Pirsig told me, "Trials never end, of course. Unhappiness and misfortune are bound to occur as long as people live, but there is a feeling now, that was not here before, and is not just on the surface of things, but penetrates all the way through: We’ve won it. It’s going to get better now. You can sort of tell these things." I needed to read the book through to that point, multiple times in my life. I did it again, this spring, and I believe it is going to get better now. As it always does.

Email ThisBlogThis!Share to TwitterShare to FacebookShare to Pinterest
Labels: book review, robert pirsig, zen and the art of motorcycle maintenance

I'm no Einstein and its been a bit of a drag at times but it is a hell of a read. Maybe I'm just dragging it out to savor it longer? Either way, its provoked a few thoughts. I just stumbled upon your blog today and it is a good one. Thanks.

Zen is not light reading, for sure. I've never made it through the book quickly and I read 7-10 books a week. In my opinion, it makes good sense to spend a while mulling over the things Zen brings to your table, rather than trying to prove you made it to the end.