I’ve always believed that not knowing who you are is a terrible and sad personal defect. In fact, I suspect that a self-aware psychopath is probably happier than an deluded “normal” person. That said, it’s not that easy to “know thy self.” With a media stuffed full of lifestyle crap and misinformation on practically every subject, it can easily take a whole lifetime to begin to come to some reasonable conclusions about our inner workings. The more complicated the person, the more complicated that task becomes.

The same applies to organizations and businesses; and corporations usually fall at the lowest spectrum of self-awareness. It’s not even a little uncommon for organizations to completely lose sight of their customers, purpose/mission, and competition. Marketing departments most often bust their little humps to create internal and external confusion, spinning pretty much every critical issue into chaos. The old manufacturing rule was, “if you can’t see it you can’t fix it.” These days when so few businesses actually make anything, that kind of self-realization is as rare as a motorcyclist on a Texas highway: one in twenty-thousand on a good day.

Due to constant exposure and disappointment with the two halves of the vehicle we’re living in this winter--Volkswagen and Winnebago--I’m thinking about the self-delusion those two corporations suffer a lot in the massive amount of spare time I have these days. After watching the most recent Super Bowl self-delusion from VW (the “we’re all angels” bullshit), I have to suspect we are witnessing the end of a once-substantial corporation. That is particularly meaningful for the Ducati glitter-ati, now that VW owns that fragile boutique brand.

Regarding the other half of our rarely-rolling home, in the various campgrounds we’ve stayed, I’ve been surprised at how few Winnebagos I see on the road. That company has been around for a lot of years and is pretty much the Kleenex of motorhomes as far as the general public is concerned. Among people who travel a lot and live in these things, Winnebago has a sorry reputation for everything from product quality to customer service. The brand must be doing well somewhere, but not in the west.

While Volkswagen/Audi/Porsche claims to the be third largest automotive producer in the world, 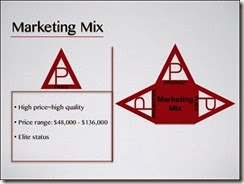 that company is a vanishing quantity in the US. Since we are still the largest market in the world, it’s a bit hard to understand how VW can be so strong in the world and so weak here. A friend (Thanks Brett.) sent me a link to a Porsche internal self-promotion; Porsche Strategic Internal Marketing Analysis. As demonstrated by their semi-crazed explanation for shriveling and lower-profit markets, VW/Porsche marketing dweebs seem to be disconnected from reality. For example, between 2002 and 2010 VW consistently scored in the bottom 10 and, mostly, in the bottom 5 of perceived consumer (owner) quality. In 2013, VW somehow managed to struggle up to 26th place, after being, once again, in the bottom 4 (above MINI, Fiat, and smart) in 2012. In 2013, Porsche was at the top of the rating pile. but earlier in this decade the company’s consumer perception swung from the bottom of the barrel to the top with no seeming connection to reality or product quality. 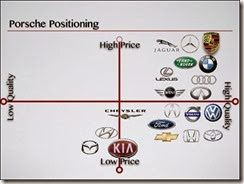 But you can see from this Porsche-generated “positioning” chart, the company seems to have no grip on reality. Since Honda, for example, consistently lies in the top-10 of everyone’s quality ratings, this self-serving chart appears to be either delusional or simply total bullshit. Ford has a consistency rating above Porsche’s; rarely falling out of the top 10 and never ending up near the bottom 5. Somehow, the Porsche marketing morons have convinced themselves that one or two years at the top overwhelms one or two years at the bottom and, therefore, position themselves at the very pinnacle of their “High Price/Quality” quadrant. Even when their limited and targeted “research” finds that the traditional Porsche market (old, insecure, rich, white people) feel that BMW, Lexus, and Mercedes are all better products, the Porsche marketeers arrogantly blow off actual data because it doesn’t fit their internal delusions. 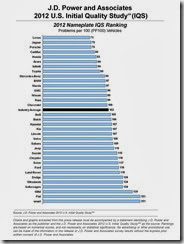 Part of the VW self-realization problem comes from the gutless inflated-grade scale they’ve presented to themselves; with several manufacturers positioned on the “Low Price” quadrants, but nobody stuffed to the far end of the “Low Quality” quad. If everyone is average or above average, it’s a lot easier to imagine yourself to be way above average. This is one result of academic grade inflation drizzling down into business. Obviously, the concept that everyone is above average is “statistically impossible,” to quote Aussy comedian Jim Jefferies. The truth is, there are some really bad car companies and VW is one of them. An honest company would look at the Power chart (at left), use that black “Industry Average” line as the middle point, and shove everything below that line to the left of the Quality center-line with the bottom five producers pushed hard against the “Low Quality” quadrant. The best VW has done in the last two decades has been to wander into the lower middle of that group that falls solidly below the “Industry Average.” 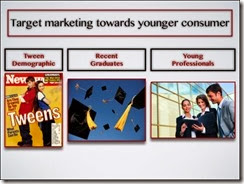 Porsche admits that their current “target market” prefers Mercedes, BMW, or Lexus (studiously ignoring Honda) over Porsche’s current offerings. The company’s solution is to “target marketing toward younger consumers.” In other words, Porsche is going after a generation that, mostly, could give a flying damn about cars in general; mostly in hopes that this same market will be too dumb to know how mediocre Porsche really is. 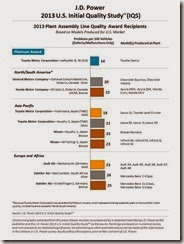 The presentation follows this pronouncement with pictures of a bunch of X&Y-Gen stereotypes, including brainless pop stars and obsolete references that most likely make no sense to their “target market, like Steve McQueen (What?) Quality, however, is a considerably less complicated target than the German dweebs believe. There are several ways to evaluate quality and one of the best is the “Problems per 100 Vehicles” measure. You’ll notice that neither Porsche or Volkswagen are anywhere near that impressive group of producers. In fact, of the VW-group only Audi scores a place on this chart with a fairly lame 23 problems per 100 units, considerably worse than the best-in-all-classes Toyota Camry 14/100. I have heard so few happy long-term-ownership stories about Audi ownership that I’d have to discount even this mediocre score. 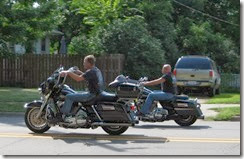 Like VW’s apparently American cousin, Harley Davidson, VW/Porsche makes several sad arguments and irrational statements. My least favorite is “High price = High quality.” The old “you get what you pay for” bullshit. Anyone who has ever paid too much for anything knows this is a fool’s argument. The only truth in this statement is that if you pay for a cow, you should expect to get something that resembles a cow. Paying a lot for a cow does not mean you’ve bought an animal that will either taste good, produce buckets of milk, or live long enough to justify the expense. It just means you paid a lot for a cow.

The other HD silliness is epitomized in the positioned for “elite status” wet dream. Obviously, people do cling to the desperate belief that owning expensive crap will make them cool. There are so few examples of cool people who believe this shit that it’s difficult to understand why it continues to draw in new suckers. It does and they are constantly disappointed. The second biggest joke in Porsche’s “new” marketing tactics is “embrace North American values and expectations.” Apparently, American car values are pretty shallow, because the Porsche marketing morons summed those values us as “Bluetooth, navigation systems, cup holders, creature comforts.” Apparently, we do not expect reliability, performance, or even value from our transportation investments. Good luck with that girls, since a big part of the reason your products aren’t selling is because we don’t believe they will get across the street dependably. 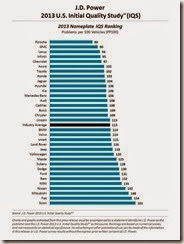 When everything else fails, marketing idiots always go for total bullshit and the chant “engineered for magic, everyday” is as total and bullshit-filled as product claims get. If Porsche succeeds with this plan, my estimation of human intelligence will fall to an all-time low; and it’s pretty damn low right now. But it won’t. Cars are transportation, first, and undependable, unrepairable transportation is an un-sellable concept. I think the Porsche marketing department, and the VW corporation as a whole, are in for an unpleasant surprise. If moving from the bottom 3 to the lower middle is enough to make VW feel good about itself, I can’t help but suspect the fat lady has sung for this German marque.