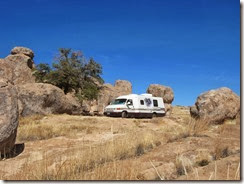 We’ve spent the week in one of the most isolated official campsites ever, City of Rocks State Park in southern New Mexico. For five out of seven days, we’ve been dry camping (no power, water, or sewer) for a week and most days and nights it is as close to dead silent here as it gets. For a couple of the days we had an electric/water site and the folks across the road from us were a pair of retired Canadians (Ontario), also in a Rialta (a 2005HD). She is a retired teacher. He is a long-time motorcyclist. We had a thing or two in common and spent a lot of hours talking about bikes, riding, New Mexico, and being retired.

One evening, we were standing behind his RV yakking about motorcycles (while our wives hid from all aspects of our conversation as far from us as they could get). About dusk, a half-dozen of the usual suspects came crawling through the park on the usual pile-of-crap Harley refuse, dragging their feet for stability on the perfectly manicured gravel road, blubbering like an old-time tractor parade. As they passed, you could see the hostility aimed toward them from every campground they passed. You could hear their misfiring, minimally powered, noise makers the whole route around the several mile campground loop and for miles as they blubbered away from the park. Their little demonstration of social ineptness was received as well as it is everywhere; they were as despised as the most despicable criminals on earth. If lightening had struck the whole group, frying them into charred bandana refuse and smoking cheap leather, no one would have pissed on their remains to put out the flames unless it would have prevented a grass fire.

The interesting thing, to me, was that the guy I was talking to, the two ladies two campers away who had a pair of scooters on a trailer, the camp host who was a long-time dirt bike racer, and every other resident of the campground were as disgusted as me. I even heard someone shout “fags” as the bikers past the campground. Considering the deluded self-image pirates have of themselves, it’s pretty amazing how universally disliked they are. Nobody thinks they’re tough guys, except themselves. Nobody looks at them admiringly, except low brows who lost their Harley when the repo-man took it away in 2008. The blubbering butt pirates are about as lonely a group as society has ever produced. Without the martial arts skills, their resemblance to wandering, dispossessed soldiers after a coup or when democracy overtakes a previously-militarized country is depressing. The fact that the Angels were created by a pack of unemployable ex-WWII soldiers who missed the “companionship” of men and the edge created by violence and the anarchy of war.

After the noise was gone, the Canadian guy and I talked about the political consequences for motorcycling these characters create. Their scare tactics to fight helmet laws, noise restrictions, and other rational attempts to make motorcycling safe and more of a transportation issue than recreational wear away the general population’s patience for all motorcyclists; in the US and Canada. On an individual basis, when one or more pirate clowns gets passed on the highway their painful noise creates a hostile road environment for the rest of us; quiet or not. Pirate parades produce a “them vs. us” atmosphere in cities and rural towns that turn us all into “bikers,” even if we are politically and socially as far from that bunch as possible. The fact that the majority of cops seem to be oblivious to noise laws and motorcycle safety because they are part of the pirate crowd generates disrespect for the police, traffic laws, and motorcyclists. I didn’t bring any of this up in the conversation, either. The Canadian guy spilled all of this out as if he were reading my mind.

The former enduro racer/current camp host was even less optimistic, “Motorcycling has gone to hell in a handbasket. Even Goldwingers are stuck in the same bucket as the Hell’s Angels and in a lot of places drivers are out to kill us. I quit riding. It’s too dangerous.” Danger is a relative term, though. Early every day this seventy-five-year-old quy saddled up his mountain bike and climbed to the top of Table Top Mountain and back before breakfast and work. When he rolled back into the campsite he would have blown by any of the bikers who had cruised the park. He wasn’t afraid of two-wheeled speed or a lot of road hazards that clearly terrified the bikers who’d rattled the windows of the park’s campers. He was afraid of being identified as a “biker” by some pissed-off driver and being intentionally knocked down as a consequence.

Later that evening, a lone motorcycle, another Harley or something like one, blubbered through the park. As usual, it was the loudest noise we’d heard all day, including diesel pickups pulling fifty-foot campers. The rider was paddling along on the gravel road, unsure of his skills and his motorcycle’s capability, making noise to warn the world that he was coming and wouldn’t be able to maneuver his vehicle if it were necessary to do so. I just finished a college teaching career and in a dozen years and more than 4,000 students, no more than a half-dozen expressed any interest in motorcycles when I arrived at school wearing my riding gear. The average age of motorcyclists is climbing every year and dealerships are vanishing and consolidating at an alarming rate. Watching this guy wobble by reminded me that the future of motorcycling is far from clear. A few Toys for Tots parades aren’t going to fix an image that appears to be pretty awful world-wide.