When I moved to Minnesota, I expected to put up my motorcycling habit for most of the year. I hadn’t planned on staying here for more than six months, so that seemed like a minor, irritating sacrifice. Eight years later, it appears that I may be here for the duration. And I haven’t sacrificed all that much of my riding season. I just ride wet and cold a lot more often than I did in Kansas, Texas, Nebraska, California, Colorado, and Indiana. I think I’ve left a state or two out, but I don’t remember some of the painful sections of my life.

At the end of the last season, I decided I "needed" a small dual purpose bike for winter commuting. In the hunt for a beater winter bike, I recently visited a dozen garages and received a dozen disappointments this past spring. In the search, I learned a lot about Minnesota culture, though. One thing I didn’t expect to see in Minnesota was high priced used motorcycles. You’d think that, in a state where the weather keeps most folks off the road for all but a month or two, used motorcycles would be cheap as cross-country skis in Texas.

It’s not as if used bikes are particularly rare here, like long, skinny skis in Texas. Practically every garage has a dust-coated bike with a weathered “for sale’ sign taped to the headlamp from the season the bike spent on the front yard. On my street, I know of six garages with unused, or barely used, bikes rotting under tarps. Only one of those bikes, an 80’s VFR, appears every fall with a new sign (but the old price), as predictably as falling leaves. It’s getting to be so dependable that, when I pass the VFR on my way to work, it reminds me that it’s time to start packing my riding jacket’s insulated liner.

If you watch the want ads, you can’t help but notice the amazing number of 20-30 year old bikes with less than 10,000 miles on the odometer. Not all of them are Harleys, either: Gold Wings, Ventures, and all sorts of touring bikes and cruisers sit idly for years in the frozen north. Bikes that you’d think would be worn to nubs after a decade or two are barely broken in before they’re put out to garage pastures. I looked at a couple of small mid-90’s dual purpose bikes with less than 2,000 miles on the odometer.

One of them had been parked because mice had eaten the wiring, seat upholstery, and cable plastic a decade ago. I was afraid starting it would cause a fire. The owner was still asking top dollar because the bike was “low mileage.” The other was nice looking, but I didn’t want to pay top buck to have to break down the motor looking for rust pits from disuse and poor storage tactics. Hell, I don’t want to pay top dollar for anything. I went through the buyer side of the equation, four years ago, when I went searching for a replacement for my 1992 Yamaha TDM. The Suzuki SV650 was what I wanted, but I had a short list of likely successors. I just couldn’t find a bike in Minnesota that wasn’t going for nearly 150% of the Kelly Blue Book value. I gave up on Minnesota and enlarged my search area and, a week later, I snagged a barely used SV (500 miles, dropped once resulting in minor cosmetic damage) in Michigan for a $1,000 less than the usual suspects’ asking price here. 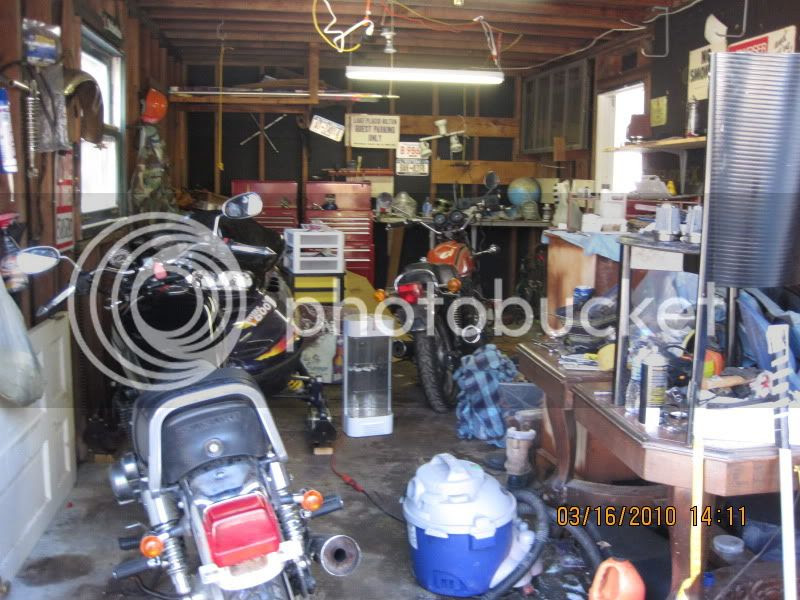 You might think that high asking prices mean high demand, but it’s more complicated than that. After finding my SV, I moved to the seller side of the economy. When I sold my TDMs and my ’86 Yamaha TY350 (Huge mistake, but I was temporarily crippled and didn't know if I would ever be able to ride a trials bike again.), I looked up the Kelly price and asked for that amount. It took most of the summer to find buyers for both street bikes and a good bit of an early spring to peddle the TY. Unlike the garage hoarders I talked to this summer, I wanted to clear space in my garage and “if I don’t get my asking price, I’ll just keep it” wasn’t a consideration. Screw that, I do stuff in my garage. I don’t want to spend my old age tripping over stuff that I no longer use. Even with that attitude, it took some marketing to find buyers for my bikes.

If it’s a sellers’ market, it’s not much of one. Some of the bikes I looked at this spring and summer have been “on the market” for years. One of the guys selling a pair of small 1980’s street bikes had four really ratty bikes crammed behind his work bench. He’d even built additions to the work bench around his bike “collection.” He’d long since given up on being able to sell those bikes and had decided to die with them rather than accept “too little” cash for his pile of rusting beaters.

Is that a Minnesota thing? I have never run into it before. My wife says it’s an “east coast thing,” where families use real estate to store generations of junk for future generations to continue storing. If you’ve ever suffered through a few moments of “The Antique Road Show,” you’ve seen the cultural difference between east and west. In the west, a well-preserved 30 year old Fender guitar is a “collector’s item.” In the east, rusted 200-year-old bottle caps that someone’s great-grandmother stuffed into a drawer and has passed down from generation to generation is a “valued family heirloom.” Maybe westerners are more inclined to get on with life and let go of the crap they used to play with to make room for the toys they are currently playing with.  Or maybe the west just hasn't been around long enough to generate really old junk.

Of the three dual purpose bikes I chased down early this spring, two were still “for sale” this fall and one actually sold for very nearly the ridiculous price the seller was asking. His asking price was about $700 more than the exact same bike sells for all over the country on eBay and $600 over the Kelly used bike price. The other two sellers are in the “holding” mode; no longer advertising, not accepting lower bids, hoping for an economic miracle that will allow them to free up a corner of their garage.

I, on the other hand, have decided to make a trip to Denver. Dual purpose bikes are much cheaper in places where people actually ride DP bikes. I’ve scouted out a ’94 XT350 for $600 and a ’95 DR125 for $700. A couple of friends still live in Denver and have garage space for my bike(s) until I get time to pick them up this winter. Maybe I’ll buy both bikes. I’ll ride the 125 and spend the rest of my life trying to get top dollar for the 350. It may not be a practical plan, but I’ll feel more like a real Minnesotan watching the XT dissolve into my garage slab. Maybe, in a few years, I can build a workbench around my garage candy.