Not Going to be Here 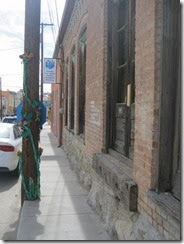 We’re sort of wandering around New Mexico, checking out places, looking at real estate, imagining ourselves in these places, and pretending we might actually live somewhere winter barely touches. Today, we’re in Silver City, New Mexico. Silver City’s resume is impressive, “Silver City has numerous other accolades, including being ranked highly by the following publications and organizations: The 100 Best Small Towns in America, The 50 Healthiest Places to Live and Retire in the United States, The 50 Most Alive Places to Live, the National Trust for Historic Preservation's Dozen Distinctive Destinations, and Oprah Winfrey's list of top spots to live.” House prices are fairly reasonable. The city has a fairly active downtown with 30+ art galleries, restaurants, coffee shops, and general purpose shopping. The city is a short ride from some of the best mountain roads, campgrounds, and state and national parks in the US of A.

All that good news is pretty much neutralized by the city’s inability to make even the slightest effort to control noise pollution. It’s not like the city’s citizens are unaware of how irritating motorcycles are. As recent as December 2013, a group of 200 locals presented the douchebag City Council with a petition asking for some relief from  “loud vehicles, motorcycles, barking dogs, speeding vehicles, loud music, etc. and how the noise pollution affected their quality of life.” The local police chief whined that the city’s valley shape increased the irritation factor of motorcycle noise and, therefore, was too hard for local cops to regulate. If anything, that argument should be more than enough justification to crack down hard. No such effort is evident anywhere in town. No luck. The city is management-free and the cops are too busy stuffing their faces with donuts to do their jobs. Plus, they actually admit they don’t know how to use the decibel meters the city bought for them. What does it take to get a cop fired for incompetence?

I held out some hope that there might be some place in Silver City that would be tolerable. to search for that place, I got out before 7AM this Sunday morning to try to get into the hills and find some quiet after a night that was as noisy as any city I’ve ever experienced, including LA. By 7:30AM, the biker douches were roaring through town and as far away from the city hub as a mile and a mountain peak wasn’t far enough to avoid the noise. Silver City must be Apehanger Hell. I don’t think I’ve seen such a high percentage of unrideable two-wheeled garbage since the last time I drove past Sturgis after the Steamboat Springs Vintage Motorcycle Week ended; about the time the Sturgis Fag Parade started. (Yes, I have adopted South Park’s definition for the “F-Word.”) It’s obvious that these guys should learn how to ride so that they don’t need the “noise defense” to warn the rest of the world that an out-of-control biker is wobbling through the city. 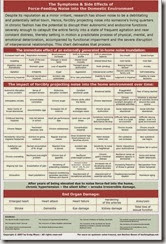 This is a quality-of-life issue and it is absolutely central to any relocation decision my wife and I would make. If the douchebags are this noise in February, they must be deafening in July when the fair-weather fags can go full pirate outfit. There are a lot of things to like about Silver City, but the noise is a deal-breaker. I live across a small lake from a I35E in Minnesota. Every house in Silver City is noisier than my current noise-polluted residence. There is no chance that I’ll subject myself to that crap twice. So, Silver City is off of the possible relocation options. By noon Sunday, we’d tossed the Real Estate brochures we’d collected and relegated Silver City to the “we might visit again, someday” category. Whoever put Silver City on the “The 50 Healthiest Places to Live and Retire in the United States” list clearly doesn’t know much about noise pollution.