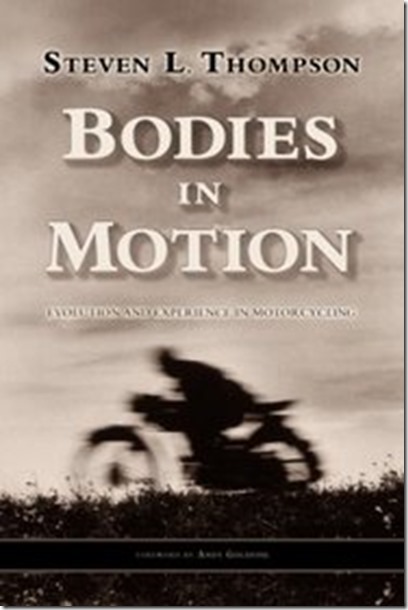 This academic look at motorcycles and motorcycling might be the first and only publication issued by Aero Design and Manufacturing (aka Aerostich). Andy Goldfine wrote the forward and it is clear that this piece of research is near and dear to his heart and his company's mission which he described as "motorcycling is a social good--an activity that benefits everyone, not just the rider . . . because even the most mundane riding experience changes the rider in psycho-biological ways which ultimately are beneficial to everyone." Andy and Thompson clearly believe this is true and Bodies in Motion attempts to prove that argument and explain why it's true.

Using sociology, psychology, human and technological history, accelerometers, data collection, statistics, and personal experience, Thompson attempts to document and explain every aspect of why we ride motorcycles and why we ride the specific motorcycles that we chose as individuals. With chapter titles like "Speed in the Genes," "Go Fast, Look good, Feel Great," and "Different Strokes for Different Folks," Thompson dives into our personalities and the "personalities" of our motorcycles. While Bodies is an academic creation, Thompson is not an academic motorcycle voyeur. He has raced motorcycles since the 1960's and has been a competitor at the Isle of Man TT and was a veteran road racer with some success under his belt, a Formula 5000 driver, a former editor of Car and Driver and Cycle World, a pilot, and a PhD candidate. Thompson is also a successful writer who has published several books of fiction and he can generate page-turning text.

Bodies in Motion is not, largely, recreational reading, though. I made it halfway through the book three times before forging to the end. The book was originally proposed as "a social history of motorcycling" for the University of California Press in 1997. By 2001, Thompson's book had turned into something else and he commissioned a bit of Stanford's engineering department to make measurements of "nine iconic motorcycles" in the hopes of explaining why those bikes have been attractive to so many motorcyclists. The end result was a book that the University of California Press turned down and Andy Goldfine picked up. Bodies in Motion is, as Thompson describes the book, something "midway between being a scholarly study and a popular moto-book."

Thompson does  a nice job of blending the academic with the moto-book, though. His analysis of  "high-sensation seekers" vs. the rest of the herd (in the chapter titled "Fast Is Never Fast Enough") was an entertaining chapter. He even comes up with a justification for street racing that didn't piss me off. I'm not convinced that the skill required for street racing is even in the territory of the standard set by real racers, but I can buy the Darwinian argument for racing when an organized track isn't available. His discussion of the motorcycle as "Performance Art" only sort of made sense to me because I am not particularly entertained by shiny motorcycles or the light they reflect.

Thompson has a habit of flipping from an academic viewpoint to the personal and, sometimes, that works well. Sometimes it is irritating or distracting. Aggressive editing to make the writing style more consistent would have improved Bodies considerably. Still, there are lots of interesting ideas and insights into motorcycling, motorcyclists, psychology, biology, and how all of those things come together in the motorcycling experience.