Too Old for That 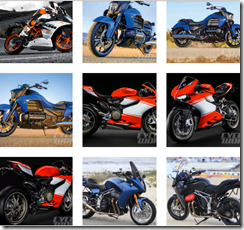 Cycle World just published an article titled “Ten New Motorcycles We’re Dying to Ride in 2014.” (Yeah, I know there are only 9 in the screen print at left.) After I scanned the article and found only one motorcycle of the bunch that I’m even a little interested in, the new Harley Davidson Street 500 water-cooled twin, I was reminded of a conversation I had with my ex-editor, Sev Pearman, just before he left his position with MMM. Sev was lamenting the fact that he had hit a moment in his life where “stuff” was losing its luster. In fact, he didn’t really care about whatever new gear, motorcycles, or other trendy hip thing might appear at the next International Motorcycle Show or even stuff that might arrive in the mail.

When I said “I feel your pain, brother.” He was surprised that I was still writing about motorcycles if I didn’t care about the latest industry news.

The fact is, I have never cared much about the industry. I haven’t lusted after a new model since I quit racing in  the early 1980’s. I have had several new-to-me motorcycles between then and now, but I didn’t “need” to have a new bike so badly that I could stomach the 30-60% financial ass-kicking a new bike delivers. I have been happy to let others bite off on that new bike smell and expense and wait for them to put the usual 500-1,500 miles on their new bike before they sell it to me, sometime between September and March, for less than half of the original cost. Twice, out of the last four motorcycles I’ve bought, the original owner had to cough up some cash to make up the difference between what I paid and what he still owed on the bike.

It’s true that as I age and get less flexible, weaker, more timid, less interested in messing with bikes and more interested in going places, and grumpier, I have developed some standards for motorcycles I’m willing to put up with: fuel injection, water-cooled, decent suspension, reasonably lightweight, comfortable seat, upright riding position, and decent fuel economy. That’s my list. Nothing else matters. It’s a well-known fact that no motorcycle will make me younger, faster, hipper, better looking, smarter, or richer. Until someone makes a product that fulfills those requirements, I’m probably on the down side of consumerism.

I too saw the list. Nothing I'd run out and want to ride, but I am glad Harley is coming out with the 500s so that maybe, just maybe, those new riding that have to have a Harley will start with something smaller than a Wide Glide.

Well written. My criteria have become very similar although I'm OK with air cooling and carburetors. A few of your recent posts have struck a chord. I enjoy the ride, not the "stuff". Stuff is a burden.

If nothing else, Harley has to replace those Buells they train with. Few new riders would pass the BRC on anything else Harley makes.

I too am glad that Harley seems to finally be coming to their senses (Honda too with their new 500s, although they weren't nearly as deluded as Harley to begin with)

I've been lusting after the TU250X since that came out... that's the only model I'd be willing to drop "new" money on if I had that much.