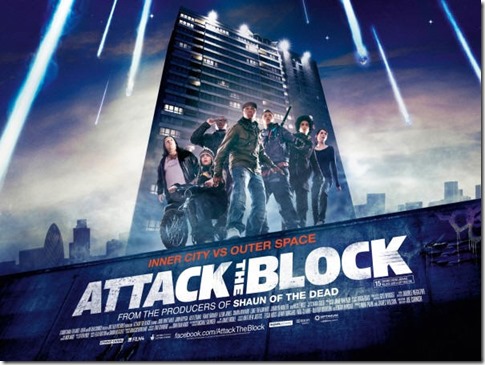 Attack the Block is a weird sort of science fiction, horror flick, action movie where the main characters are mostly kids. In fact, the kids are poor British slumdwellers who are gangsters, muggers, and dope dealers of various shapes, sizes, ethnic origins, and ages. The premise is a bunch of pissed off black ape-dogs fall from space and tear around one block in London looking for love in all the wrong places.

The kids are fearless (mostly), incredibly creative, and clever. The film's main focus is a young gang leader named Moses who finds the first invader when it crashes through a car roof as the gangsters are robbing a woman pedestrian. Pissed off that the alien bit him, Moses hunts the weird looking thing down and kills it with a knife.

Finally, here comes the motorcycle angle. When the black dog-apes from space begin falling from the sky in droves and start attacking the block, the kids protect their neighborhood on skateboards, bicycles, scooters, and one very small dirt bike. The stunt riding is pretty good, very realistic. Scooter fans will be dismayed at the believable way that the scooter fails to negotiate stairs, corners, and most anything that a scooter does poorly in real life. The motorcycle, of course, is entirely competent at in all situations. Eat your hearts out scooter boys.

The credentials behind Attack the Block are from the mighty minds of Edgar Wright and Nick Frost of Shaun of the Dead fame and infamy, one of the only interesting zombie movies in the history of zombie movies or zombies. Frost plays a dope selling stoner who hides out through the whole event getting more stoned as the aliens get more frantic and providing the "scientific" explanation for the attack along with his customer and fellow stoner, Brewis (Luke Treadaway), who fills in the holes the plot intentionally leaves for the viewer to figure out. Like Shaun of the Dead, Attack is more lightweight fiction than science fact. It is seriously fun, though.