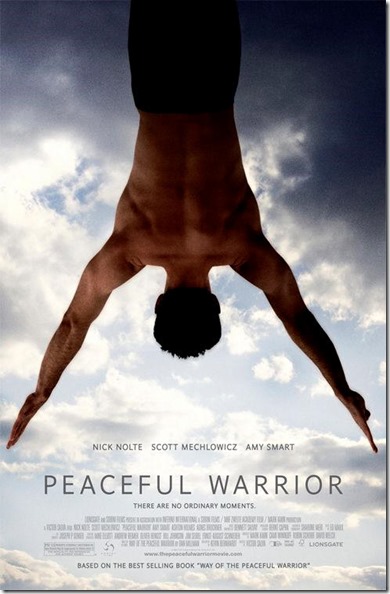 This is an odd sort of movie, bits of mystical Karate Kid blended with a love story and a little smidgen of Rocky. Acrobatic college athlete, Dan Millman (played by Scott Mechlowicz), wrestles with his emotions and ego while his garage mechanic mentor, Socrates (played by Nick Nolte) "teaches" Dan to read minds, perform miraculous acts of strength, agility, and balance, and to "take out the garbage" in his cluttered mind. After some early triumphs in Dan's spiritual education, the arrogant college boy gets impatient with his progress and decides to go back to his frat-brat party life.

About a third of the way into the film, Millman races his Triumph through town in a rebellious tantrum and Peaceful Warrior provides viewers with one of the most realistic, nastiest motorcycle crashes in film history. The result of that crash is Dan breaks his leg into tiny pieces and ends up with a limp, a crutch (literally), and crushed dreams of being an Olympic gymnast. HJC gets a little product placement with several close-up shots of that brand's full face helmet, including a bit of head bounce when the rider hits the ground.

More tantrums follow (now they are justified) and he battles with his injury, his mentor, his friends, and himself looking for some kind of inner peace, strength, humility, and self-knowledge. Through a series of Zen-ish exercises that are often silly enough that you begin to expect David Carradine to add his Kung Fu wisdom to the collection of platitudes, Warrior takes Millman and us through his path to enlightenment and a return to college gymnastics.

Most of the way through the story, Millman asks Socrates, "What do you do, if you can't do what you were born to."

Socrates answers, "Everything has a purpose, Dan. Even this. And it's up to you to find it."

And I began to suspect the best moments of Peaceful Warrior came and went with the motorcycle crash. The dialog does stiffen up a bit and some bits of actual wisdom appear in the dialog. Among my favorites are:

"There's never nothing going on. There are no ordinary moments."

"There is no starting or stopping, only doing."

The supporting cast is fine. The stunt gymnast is amazing. The music is schmaltzy and over-dramatic. I'd give it a three out of five stars. The slow-motion motorcycle crash accounts for at least one of those stars. It's a feel-good movie and the best part of that is that Millman is the real thing. Wikipedia calls Dan Millman the "former world-champion athlete, university coach, martial arts instructor, and college professor." He is also author of fifteen books and an inspirational speaker. He actually did overcome the effects of a disabling injury and has had an exceptional life.