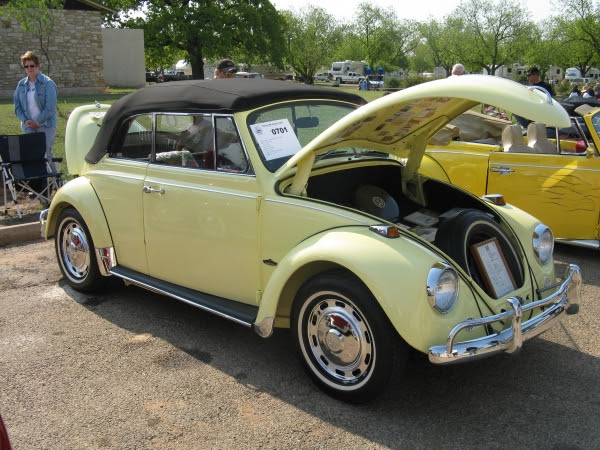 My recent battles with VW products and the company’s general distain for customers and service is not new thing. I just forgot from whence German products come. Back in the 60’s through the late 80’s, I owned a collection of VW Beetles and a trio of vans. I was never fooled into believing that these vehicles were well designed, quality products. I knew their own claim to fame was that parts were cheap and the vehicles were easily repaired; by me. I learned on my very first VW, at 1967 VW Beetle Convertible, that VW dealer service was expensive, incompetent, and that the dealer/manufacturer warranty was bullshit that no one had the slightest intention of standing behind.

Irrationally, I still loved my little convertible and still sort of lust after one, knowing full well it’s a dangerous, poorly-designed vehicle with terrible handling, a frame that will dissolve into rust like a cube of sugar in water, a motor that is designed to die at 50k miles, and at best is a historic relic that would be more of a toy than transportation. Yep, I know all that, but I still have fond memories of my year owning that car. Even though I also remember having to put a new motor in it at 25k miles because the factory A/C overpowered the motor in short order. I even still remember that the dealer gladly took out the A/C without giving me any credit for the device while charging me $600+ for a top end job on a car that should have been under warranty. And those were my salad days when I was earning $2.20/hour.

From that I went to a 1968 VW Westfalia camper van I bought from an Amarillo dealer with 25,000 miles on the odometer and, as it turned out, 70,000 more miles that had been rolled back by that same dealer. (None of these pictures are of my actual vehicles, by the way. I didn’t start taking pictures of anything until I was nearly 30 and then it was just of my kids and a couple of motorcycles.) A couple thousand miles later, the motor started smoking and the transmission lost a gear or two and I ended up in a several month long civil suit after which the VW dealer gave me back my purchase price plus a few thousand bucks and paid my lawyer’s fees. That was my last experience with a VW dealer for anything until my most recent fuck-up.

But it wasn’t my last VW by a long shot. Over the next twenty years I owned a half-dozen bugs, all ‘66 and ‘67’s, and a Karman Ghia. I bought them cheap and drove them into the ground. Sometimes, literally. When I wore out my last Beetle, I pulled the engine, pushed out the windshield, and had a friend shove the hulk over a Nebraska cliff so I could experience rolling a car fairly harmlessly. It was, in fact, fun. In case you’re wondering. Much later, I bought a 1976 Westfalia van and spent a California summer turning it into something my little family could camp in on weekend adventures. The camper part, like our Winnebago Rialta, worked fine, but the horrific Type 4 engine was a curse. On any hill, under any over-90oF-temperature situation, bucking any sort of headwind, that worthless “Porsche- style” motor would overheat and if you didn’t play immediate attention to the signs of eminent failure, it would fry itself in moments. As in previous designs, VW paid absolutely no attention to air-flow, particularly on the 3rd cylinder, and the motor would easily self-destruct if you weren’t paying close attention for the symptoms. We spent almost as much time parked on the side of fast-moving California freeways as we did camping in the worthless pile of crap. The kids, however, have fond memories of our VW camping trips and I suppose that made my stress worthwhile.

And, until the latest fiasco, was the end of my VW experiments. From that cornholing I took from the Texas VW dealer on the first Westfalia until I sold that last VW van, I didn’t buy a single part, get the most basic service, or ask a single question from the well-known-to-be-worthless VW dealers in any of the places we lived; from Kansas to Texas to Nebraska to California. The only saving grace I found to VW ownership was that real engineers made aftermarket parts that were magnificently superior to German-made crap. I learned to do everything, from suspension repairs and modifications to engine overhauls, myself. For a few years, I was sort of a resident “VW expert” for a lot of friends. Not a serious recommendation, by the way.

After a brief and painful experiment with a Volvo station wagon, I abandoned all things Euro-trash and have mostly lived a simple 4-wheel life without having to become expert at any of the cages we’ve owned over the last 30 years. I put more than 300,000 miles on my Toyota Hilux before I had to do a valve job and other than one transmission seal (installed without having to remove the transmission) and the usual basic maintenance, that vehicle was bulletproof for almost two decades. A Minnesota guy is still driving that truck during the non-salting season and has practically restored it to new condition. My three Fords have also been ultra-reliable and the newest vehicle I’ve owned in 50 years was a 1988 Nissan Pathfinder that was a little salt-sensitive, but otherwise solid as a rock.

Why I imagined that Germany had learned anything since pre-War II Beetles is a question I’ve been asking myself, non-stop, for the last five weeks. While I’ve heard lots of fairytales from BMW owners about their legendary, but suspect, reliability, every BMW owner I’ve personally observed spends more time fighting with their PoS bikes than riding. Their drive-line lectures are wonderful fuel for argument, but I never believe a word they say based on my own experience and observation. The simple fact that BMW is foolish enough to put the oil filler on the Boxer’s right case and the oil level window on the left side is all I need to know to be reminded that BMW has still staffed the engineering department with inbred, toothless hillbillies who have never performed a moment of maintenance.

During my cage-less period in California, an employee was in the process of going broke trying to keep a Porsche 924 and his wife’s Mercedes rolling. Because I have no common sense at all, I volunteered to take a look at the Porsche (the Mercedes was too much of a clusterfuck even for me). Surprise! The Porsche’s problems were all electric and the electrics were unbelievable. The area behind the dash was a rat’s nest of disorganized, poorly connected, fragile wires and troubleshooting that mess required the complete disassembly of the car’s interior. Still, we gave it a shot and after way too many hours spent on what was clearly a PoS vehicle it ran. Unfortunately, it ran for about a month and gained his confidence until it, once again, died on the 405 and left him stranded, late for work, and pissed off. Eventually, he decided the best thing to do with the 924 was to part it out. I suspect that’s the best repair move for any German vehicle. There appears to never be a shortage of dumbshits who think they can fix this crap and are willing to pour their life’s savings into the attempt. In fact, my friend made out like a bandit; selling the Porsche bits for about twice what a whole vehicle was worth.

The Mercedes, on the other hand, provided one of my favorite California stories. We’re way past the statute of limitations, so I can tell it in writing now. The Mercedes was one of the first vehicles to have a version (non-functional) of ABS. (I don’t know the model, all Mercedes look either like 1960’s James Bond vehicles or pregnant Ford Taurus’s, to me.) My friend’s car developed the cute habit of locking all four wheels, spontaneously, often when the vehicle was in heavy traffic at freeway speeds. His wife developed a bit of resentment toward her homicidal vehicle. After blowing a few thousand dollars on repair attempts, my friend came up with a brilliant “fix” for his last German car problem: he drove the piece of crap to Tijuana and left it parked downtown with the keys in the ignition and caught a ride back home with a friend. A day or two later, he filed a theft complaint on the Mercedes. A few days after that, he received a call from the San Diego police that his car had been found in National City. Disgusted with the poor quality of Mexican car thieves, he drove the National City to retrieve his Mercedes. The only thing the Mexicans had found worthwhile was the aftermarket Alpine stereo (the factory Blaupunkt had long since died). The lesson learned there was even 3rd world car thieves have better taste than Germans.

Repeatedly, when I have talked to mechanics about my VW Eurovan problems, I hear that current US and European RV manufacturers have abandoned the VW chassis because of exactly the problems I’m having. They consistently follow that with, “Most of the current stuff is based on the Mercedes Sprint chassis. Same awful workmanship, even more expensive and complicated electronics, but the chassis is slightly more robust. The automatic transmission is still shit.” Good to know, but not all that helpful when you are trapped in New Mexico without much hope of ever driving out.
What I have learned from this experience is that I’m gonna zone out even quicker when someone tries to blow bullshit at me about the wonders of their Bavarian pile-of-crap motorcycle/car/haircut/stereo-system/etc. Love that German crap till Hitler shaves his moustache, but you’re not foolin’ me. You’re just tryin’ to find a sucker to take the piece of junk off of your hands and “it ain’t me, babe.” If you wonder why I’m a geezer who holds grudges, my German vehicle experience is one place you ought to look.
Technorati Tags: volkswagen,eurovan,winnebago,rialta,service,reliability,customer service
Posted by T.W. Day at Thursday, January 02, 2014