About a year ago, Pat Hahn asked me to write the Department of Public Safety's motorcyclist section on "passengers." The idea was sort of a joke, since I rarely take passengers and do my damnedest to avoid being one. I don't like the idea of motorcycles as a two person vehicle. I'm not a fan of two-up motorcycling for the same reason I don't particularly enjoy horseback riding. It's hard enough keeping track of one slow mind. Two opinions on where I'm going is one opinion too many.

Every once in a while I end up with a passenger, usually a friend who can't read his fuel gauge. It happens, but I don't like it. Even worse, I've been the passenger myself a few times. If you've read my column a few times, you might guess that I'm something of a control freak. Not radically so, but admittedly somewhat. I, especially, don't like giving up control of life or death. In particular, my life or death. Even more important, I don't want someone else's lack of skill to cause me pain or injury. At my age, I'm more afraid of being badly hurt than killed.

For a long, long time, I managed to ride a lot of motorcycles without going double. Ever. After he became a better rider than me, I conceded to riding double with my younger brother a couple of times, but I didn't like it much. For a while, he owned a bike and I didn't and that was the only motorized two wheel ride I could get. Once I got my own ride, I stayed away from passenger pegs for years. Then sometime around 1975, a friend bought a brand new Kawasaki Z1 900cc street rocket. He brought it by to show off and convinced me that he'd ride rationally if I let him show off his new toy. His definition of "careful" and mine turned out to be radically different.

We headed out of town on a fairly isolated two lane road and he decided to wind it up. And up, and up, until he topped out at 150mph or so. Light speed, from a dirt biker's perspective. When he slowed to turn around, I put an arm lock on his throat and said, "Anything over 55 and I squeeze until goo comes out of your ears." We rode all the way back to town with my arm locked around his throat. The experience put a damper on our friendship for a few days, I was pissed that he tried to kill me and he was pissed that I threatened to kill him. Eventually, we got over it and went back to trying to kill each other on the motocross tracks. I avoided motorcycle passenger-ism for a few more years.

Eventually (in 1983), I traded in the dirt bikes for a street bike. That, naturally, added the possibility for two-up trips and I made a few of those with my wife or daughters (one passenger at a time, of course). My wife, an ex-motocrosser, never got into being a passenger and has never felt the need to expose herself to street traffic as a rider, so she and I have taken very few motorcycle trips together. My daughters have been more willing travelers and, properly geared up and helmeted, we explored a lot of California and Colorado together. I ride a lot more conservatively with any passenger and incredibly cautiously with my daughters on the bike. Honestly, the tension provided by the knowledge that I have their lives in my hands is barely offset by the fun we have in traveling together. I doubt that I could live with myself if something happened to them on the bike and that is too often in my mind while we're on the road. Now my daughters are grown, married, and away from home. I miss the kids, but they're not kids anymore and I'm not looking for new passengers.

So, I end up going alone most of the time. And that's fine by me because the solitude is something I love about motorcycling. 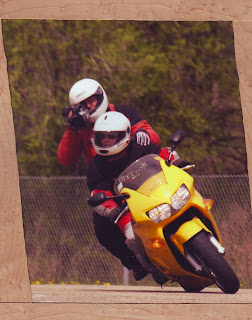 So with all that history and prejudice in mind (and well known to Pat), Pat Hahn suggested that I do a ride-along on the back of his VFR at a MN-Sportbike closed course event this spring. I'd be lugging $5,000 worth of video camera along with my $5 body and $300 head, so I was less than convinced that this was a great idea. (2014 NOTE: This was at least eight years before the US arrival of hi-res consumer mini-cams or decent affordable helmet cameras. So, my television camera was a serious piece of hardware.) Somehow, on the spur of the moment, I ended up on the back of Pat's bike, blitzing along Dakota County Tech School's road course. Pat is an exceptionally smooth rider and, soon, I began to relax and aim for rider-perspective shots of the track. You'll soon be able to see a few moments of the footage from that experience on my cable-access show, Motorcycling Minnesota. (Remember, this was written in 2004. That show lasted about two seasons and it still makes the rounds of public access stations around the country. Just no longer in Minnesota.)

Pat wasn't satisfied, though. He decided I should take a ride with two other MN-Sportbike'rs and film the other two groups from the track. Taking my best passive aggressive stance, mainly avoiding the staging area as long as possible, I went back to filming the event from track side. I managed to get caught, twice, and ended up on the passenger saddle two more times. Both riders were as competent and safe as I could expect, but I'm glad it's over. I'm not planning on doing a sequel, either. Mostly, I was reminded of why I'd rather be in control of my destiny and destination. Thanks guys, but I'm sticking to my own bike, or my feet, from here out.

As I wrote on the DPS site, being a motorcycle passenger is, at best, an act of extreme trust. Your passenger is entrusting you with their life support equipment. That's not the kind of power you want to hand off to just any doofus who manages to obtain motorcycle financing. If you wouldn't trust the rider with your oxygen supply, don't trust him with a bike. Not that many passengers seem to think about that. At worst, being a passenger is an act of stupidity. I see women and boys perched behind riders who are so incompetent that leaving a stop sign appears to be a major accomplishment. Being a trusting person is probably a positive personal trait, being a fool isn't.

A few years back, I met a Harley owner who bragged that an attribute of his bike brand was that he always left the bar with the best looking . . . woman (my word selection, not his). Watching him wobble away from that discussion, it struck me that a leather covered inflatable doll would probably serve his purposes but I wasn't certain that a blowup manikin would be foolish enough to ride with him. Which left me with a rough estimate of the intelligence of the woman on the back of his bike.