Because our VW-handicapped RV has been pretty much useless as dependable transportation, we’ve been overusing the WR250X a lot on this trip. So much so that I’m beginning to worry about the WR’s clutch and, even, the transmission. There is no polite way to say this, but 2-up we’re uncomfortably close to over-extending the WR’s recommended gross weight: 408 pounds. 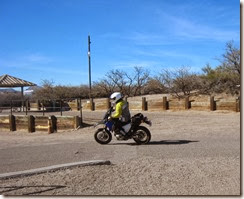 The good news is that all of this minimalist living has helped me drop below my long-despised 200 pound anchorage. At my current rate of weight-loss, I might be at my target 175 pounds by April. I suspect that’s grossly optimistic, but a guy can hope can’t he? I left MN in October having been stalled at 195 pounds for a couple of months. That’s 50 pounds down from my pre-hip-replacement weight and 35 pounds down from last winter’s heart attack weight, but still 20-30 pounds above my target weight. It’s scary to remember that I was approaching 100 pounds over my “fighting weight” just two years ago and had been squatting around that benchmark for more than two years before that.

Regardless, when my wife and I two-up on the WR—counting gear and bodies—we’re right at the WR’s max gross load limit. The brand new rear tire is showing more wear than it should and the front tire, which probably should have been replaced before we left, is really wearing down quickly. So, when Elvy expressed some boredom with our current routine of two weeks at an Elephant Butte campground and two-three days at a TorC spa, I was in that spot that all husbands try to avoid. She proposed that we take a day trip, about 200 miles round trip, to one of the national parks. How do you say, “I’d love to, honey, but I think we’d bust a chain and blow a rear shock seal going up those hills.” 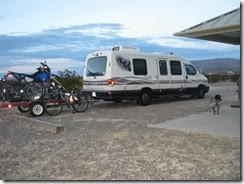 On the Rialta forums, there has been a lot of talk about the wimpy VW transmission and underpowered V-6 and trailers. When we headed out, I took what I thought was a mid-line and bought a 200 pound trailer and loaded it up with my 275-pound WR and a couple of bicycles. The Rialta supposedly has a 2,000 pound towing capacity and a 400 pound hitch rating. Some Rialta owners have towed cars, much larger motorcycles and trailers, and many have hauled scooters and large storage cases on the hitch. Other Rialta owners have said in no uncertain terms that the VW transmission is barely fit to be part of a small car’s power train and should never be considered seriously as a reliable device.

Decisions, decisions. I took my best shot at a combination I felt I could tolerate and here we are. 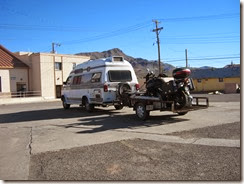 When I as last in TorC, I spotted a Class B van with a bike on the back. At first, I was a little jealous because the trailer was about as substantial as my whole rig and the bike was a V-Strom 1000, more than enough bike to haul any size and weight rider and passenger. In retrospect, the Class B rig might have been a better bet for us, too. It would still have the same problems when/if the vehicle needed service, but most likely someone could actually fix a Ford/Dodge/GM in less than 6 weeks and thousands of dollars. 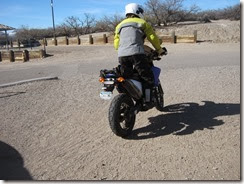 On the other hand, I had no plans to ride two-up at all on the WR. The idea was that my wife would be in her rolling home and I would be off on my own occasionally tent camping and sleeping on the ground. Babysitting this damn RV has blown that plan out of the water and turned my baby into an errand mule and an overloaded packhorse. There have been moments, though, when I got to leave the PoS RV behind and head out into the sand dunes, the mountain roads, or random Arkansas, Missouri, Texas, and New Mexico backroads and those few hundred miles would have not been fun or possible on my V-Strom. I regret the abuse my WR has suffered, but it is still be most fun motorcycle I’ve ever owned and I promise to put in a few dozen hours of diligent maintenance and TLC when I get home and back to my shop. I promise.

I dare not extol the virtues of a BMW R1200GS for it's mule like load carrying abilities! Mine carries suitcases to and from the airport and even on occasion Mrs N....

The V-Strom more than carries everything I want to carry. The problem is that trailering it might overtax my mostly useless VW-RV's engine and transmission and, of course, it would be minimal fun off-road.

I say keep the WR250 and simply add a more road worthy motorcycle. You already have the trailer. The logic is as follows. any time you make a dirt bike more road worthy, it comes at a cost to the dirt worthiness of the machine and vice-versa. Trust me, I ride a 2004 Triumph Tiger 955i. I can ride fire roads, gravel roads, dirt roads, paved roads (hundreds of miles at a time), but they are all still graded roads of some sort, and even then sometimes it gets sketchy now and again. I take my CR250 out on single track but would hate to ride two up any where, more than necessary.

Trailer them both and ride the appropriate one for the days activities.

If I were driving an actual vehicle, taking both would be a desirable, valid option. However, I am the sad owner of a Volkswagen product. Nobody who has ever owned a VW-anything and knows squat about vehicles, machines, motors, drivelines, wheels, gears, chains, or gasoline would consider towing as much as I'm already towing. Hell, the V-Strom is probably more fit to to the VW than the alternative.

When you make one major dumb decision, all other decisions are relatively foolish until you fix the first. If we ever get back to MN in one piece and with some portion of our assets still intact, the VW goes and no Eurotrash crap will ever darken my life again.

Well even if the WR needs a little maintenance I think it is probably good you brought that one along as it seems to be handling the wear and tear fairly well even if a little overtaxed. Anything else in the 250 range might have gone kaput by now.

Good job on the weight loss too.