Bloomberg just published an essay titled, “The Motorcycle Industry Is Dying.” Not a new concept and much of their analysis has been seen here first, but it’s slightly comforting to see some one else get it. The article puts a lot of weight on the new Honda Rebel 500 and I have to admit that is entertaining. I rode the Rebel 250 for the first time in a MSF class a couple of weeks ago and it is awful. There is nothing about that motorcycle that would have enticed me to get into motorcycling.

“Honda’s Rebel is the latest entry in a parade of new bikes designed for first-time riders; almost every company in the motorcycle industry has scrambled to make one. They are smaller, lighter, and more affordable than most everything else at a dealership and probably wouldn’t look out of place in the 1960s—back when motorcycling was about the ride, not necessarily the bike. They are also bait for millennials, meant to lure them  into the easy-rider lifestyle. If all goes as planned, these little rigs will help companies like Harley-Davidson coast for another 50 years.” Good luck with that daydream. 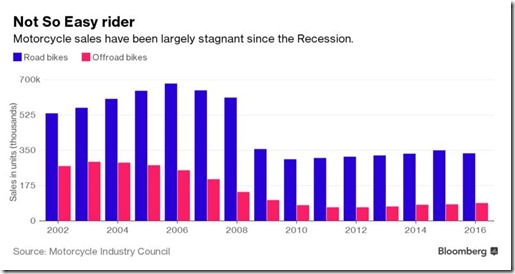 I personally can’t imagine anything other than a hoard of electric bikes in the $5,000-territory that will turn the motorcycle economy around, but power to them for finally waking up and discovering Boomers are dying off. “A motorcycle is a picture of discretionary spending, and they can be tricky to finance even in a healthy credit market. Even now, with the stock market on a historic bull run and after the U.S. auto industry posted its best year on record, traffic in motorcycle stores has stayed slow. In 2016, U.S. customers rolled off with 371,403 new bikes, roughly half as many as a decade ago.”

Too little, too late has been my analysis for the last decade. This author sort of agrees, “The problem, however, with this sudden industry pivot to younger customers is that it may be coming too late. For years, it was too easy to just keep building bigger, more powerful bikes.“ It was easier and Boomers were dumb enough to buy into pretending that 60 was the age of midlife crisis. Ride down WI35 and look at all the Harleys out on the front lawns for sale. It’s over boys, now what are you going to do? One problem with a lot of these little motorcycles is that they aren’t as energy efficient as many cars. If anything makes motorcycles a purely recreational toy it is lousy fuel economy.

It could be a bigger trend than motorcycles, though. Driving, in general, has lost a lot of appeal to practically everyone.