I retired in 2013 and my wife and I escaped our first Minnesota winter in 18 years in a used Winnebago RV. That was the plan, anyway. Unfortunately, I discovered a whole lot about Volkswagen and that company's non-existent product support along the way (Ducati owners beware!). So, instead of a 13,000 mile trip to the southern California and up PCH to Portland, we spent the winter (all five months of it) in Truth or Consequences, New Mexico while I troubleshot our Eurovan's electronics and contemplated going back to some kind of work since "retirement" had turned into such a disaster. 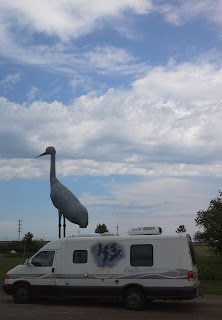 Along the way, I met some really terrific people who also owned the same POS RV (Ours was a 2000 Winnebago Rialta.) and had a bunch of discussions about what kind of person makes a "good" RV traveler. Many of us came to the conclusion that the fact that I was perfectly happy traveling by myself, staying in cheap motels or sleeping in a hammock or on the ground probably meant I would never be a "real" RV sort of guy. Some of you might know that I generally don't like driving any sort of four-wheel vehicle and would rather take the train, bus, or hitchhike than be anyone's designated driver. Sometime during my early 20's I passed the million-mile mark in work vehicles, driving 100,000+ miles a year for almost a decade, and any love I might have had for cars or trucks vanished. I own a pickup because it can carry a lot of crap, including my motorcycles and because my wife hasn't given up on that damn RV dream. On my own, I'd rent a car when I need one.

We bought the Rialta because it was supposed to be fairly easy to drive. As long as you didn't have to back it up with a motorcycle trailer in tow, it wasn't particularly painful to pilot. I ended up doing most of the driving because my wife freaked out about the motorcycle trailer, but she did at least 20% of the driving later in the trip and that made 20% of the RV traveling tolerable for me. Mostly, I wasted most of that first year's summer getting the RV ready to travel: new flooring, transmission cooler, overhauled the A/C, new entertainment center, and a full 75,000 mile point-by-VW-point service. 2,000 miles later, after being stranded in a snow and ice storm in Carlsbad National Park for a week, the many flaws in VW's wiring and electronics put the vehicle in "limp home mode" and we eventually limped into Truth or Consequences for the next five months. In April of 2014, we drove the VW/RV back home, cleaned it up, and sold it. End of story? 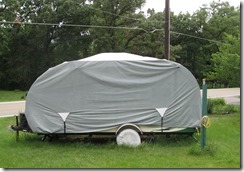 Like I said, my wife had not given up on the RV dream but her new mantra became, "You want your house separate from your vehicle." Slowly, I got talked into thinking about trying the mobile life again. Too many of the VW's problems came from the poorly implemented electronics that controlled the automatic transmission, so I started looking for something with a manual transmission that could haul a motorcycle and pull a small trailer. Just in time for the move to Red Wing, I bought a Nissan Frontier in great shape with a manual transmission and cruise control; the Holy Grail of traveling vehicles. After some nagging and pleading, we stumbled on to a small camper that had the layout, weight, and price we'd decided on. We bought it last fall, knowing the chances that we'd go somewhere in it were slim due to other commitments for the winter. I'm writing this in mid-July and the camper hasn't moved an inch since the previous owners parked it in our yard. Like 90% of the campers purchased on this planet, it is serving as a yet-unused spare guest room.
"What's the problem?" You ask.
"General disinterest, marginal backing up skills, and practically no familiarity with towing anything other than a U-Haul trailer," would be the answer.
I'm perfectly happy with a tent and sleeping bag, and rolling down the highway on two wheels. I don't need to learn the new skills required to setup and drive a vehicle pulling a 3,000 pound trailer. My wife's interest in traveling by RV is still strong. She, on the other hand, is expecting me to find the motivation to not only do all of that crap but to teach her how to do it, too. We've been married almost 50 years and all of our worst moments have been when I was stuck being her coach or teacher. I am a professional teacher, but she is a life-long stubborn resistant-learner. She has absolutely no self-teaching skills, instincts, or motivation and I would rather hand feed an alligator tiny pieces of steak than be forced to teach my wife anything difficult.
And there is the problem.
My memories of our five months "camping" are mostly of me trying to sort out VW's well-hidden and inaccurate service information, crawling around under that damned Eurovan POS or disassembling the interior or engine wiring to find the three cobbled-together engine and transmission computers or worrying that I would be abandoning our $20,000 RV investment in New Mexico (the home of many abandoned retirement dreams). The "good moments" of that winter were mostly spent on my WR250 bombing around Elephant Butte Lake's dried up shores relearning how to ride in deep sand. I've been told that when fellow campers heard the bike fire up they'd drag lawn chairs to the lake-side of their campsites and place bets as to how long it would take before I endo'd into a pile of sand. I rarely disappointed them. Other fine camping moments were when I'd given up hope on the VW for the day and settled down with a few bottles of beer and my Martin Backpacker to sing Kink's songs to the coyotes. The best moments where when I'd given up on the VW entirely and loaded up my camping gear and headed into the Gila National Forest mountains for a couple nights of solo camping while my wife stayed with the camper and dog and our new friends at the hot springs in Truth or Consequences.
Speaking of the dog, the obvious problem here is getting and old dog to learn new (not particularly desirable to the dog) tricks. The idea of driving a fairly large pickup with a camper in tow is just not inspiring. I am really nervous about the whole concept. It seems claustrophobic and dangerous and complicated and expensive. In fact, at the moment I'm a lot more inspired to start the process of convincing my wife that we'd be better off selling the camper and giving up on the whole idea of traveling together than I am to learn how to be a competent RV'er. When I see something like this moment appear in my motorcycle students, I do not encourage them to press on. Maybe pulling a camper isn't the same kind of risk as riding a motorcycle, but it does feel like the kind of thing that you shouldn't be doing if you can think of a better way to travel. I don't, honestly, have any faith that I'm going to be good at pulling a trailer and I have absolutely no motivation (other than making my wife happy) to learn how to pull a trailer safely. "Why me?" is the phrase that comes to mind every time I look at the thing parked in my yard.
Twenty years ago, even ten years ago, I'd have bulled through the fear and loathing and learned how to do this thing that I really don't want to do. At almost 70, not so much. The only good to come from this moment, so far, is that I have a lot more empathy for my motorcycle students who really don't want to be out on the range learning how to ride a motorcycle to please someone else.

MMM Winter 2016
POSTSCRIPT: As of this week (July 11, 2017), our R-Pod has only been used as an occasional office for me and my brother Larry stayed in it for a couple of weeks this month. After watching Larry and me wrestle with getting the pickup hooked up to the trailer and--after discovering the 7-pin electrical connector was wired wrong--drive off to practice backing up and parking the damn thing, my wife decided she wasn't as hip on the camping idea as she'd thought. Now, she wants to sell it and buy a mini-van.
Posted by T.W. Day at Monday, July 10, 2017