One of my favorite things about Mount Rushmore is the statements the Park Service selected from each of those Presidents. George Washington’s words are, probably, my favorite, “The preservation of the sacred fire of liberty, and the destiny of the republican model of government, are justly considered as deeply, perhaps as finally staked, on the experiment entrusted to the hands of the American people.” Life and democracy are just a series of experiments, some successful and some not so much. Anyone who has ever worked in a lab of any sort knows that you just move on when an experiment fails.

So, with that background in mind, I think the MIC has been clueless in its sudden approach to find new customers. I’ve been saying, for almost 20 years, that new riders will not be the same people as the old riders. The Hardly/biker/gangbanger crowd are old,

white, poor, and stupid. They are, literally, on the way out; and good riddance. Their redneck replacements will be even more poor, dumber, and will satisfy themselves with the old stock easily found on practically every block in the country. Harley stock-piled bikes in warehouses, dealers’ lots, and in the garages of wanna-be yuppies who are so underwater on their chrome toys that they’ll never see dry land again. In the meantime, those “nicest people” Honda once convinced to buy motorcycles have moved on to other things. In Sound Familiar?, my last post, I ridiculed the traditional approach the MIC is taking to try to cling to the biker business in spite of the fact that bikers are about as trendy and hip as Disco Dan. A local Red Wing motorcyclists’ Google group I sometimes follow was on a similar subject, based on that Bloomberg article and the fact that internal combustion powered vehicles are losing ground faster than expected.

One member seemed to think electric motorcycles are a joke and that my suggestion that motorcycling advocates try to seperate motorcycle licensing from cage licenses was ridiculous. “I'm envisioning an electric moped running the ironbutt rally. Pulling a trailer full of batteries. Picking up fresh batteries every 100 miles.

“Not to mention that a driver's license is much more than a license to drive, but also establishes residency, personal identification and even implied nationality.

“In my opinion, it makes sense to learn to drive in a car. Protected by a cage, one can learn traffic patterns etc without the undue risk associated with a bad/inexperienced decision on an MC.”

Since the Iron Butt is probably the ultimate motorcycling conspicuous consumption event, 1000 miles a day for no reason other than to burn fuel and attempt suicide-by-deer, I don't think many motorcyclists or motorcycle manufacturers take it into account in their product planning. I suspect there are more motorcyclists who don't know about the IBR than who do. I'd never heard of it until I moved to MN in 1996 and I'd been on two wheels for 40 years at that point. People who might commute by motorcycle are, or should be, a far bigger concern of the industry than the 12 guys who spend as small fortune on their once-a-year IBR extravaganza and the rest of the year recovering from that crippling event.

However, you might envision the ass-kicking suck-pow-blow bikes are getting at Pike’s Peak. Like horse-and-buggy owners at the turn of the last century, electric vehicles are coming on a lot faster than the old guard thinks and the speed of that change is only going to get quicker.

In fact, a drivers’ licenses is exactly nothing “more than a license to drive.” There are identification cards that serve the identity purpose of a drivers' license and you get them at the same DMV office or, in civilized states, at the post office or your local library. Red state voter suppression politicos try to make ID cards as difficult and expensive to obtain as cage licenses, but those folks are fighting a losing battle. Demographics and economics are going to be driving this bus and no matter how much voter repression goes on in the red states, those two things will be driven by forces outside of political control.

That last argument is what I think of as the ultimate helicopter parent whine, “I’m gonna put my half-witted offspring in the largest SUV possible, in case little Douchebag gets distracted by his cell phone, video game, and in-dash movies and loses control of his vehicle and kills your kid; who was responsibly walking, bicycling, or motorcycling.” If you think young drivers are learning traffic patterns, you haven’t been on the road in any sort of state of consciousness. You don’t learn patterns or good habits from being inside a well-protected, smarter-than-you vehicle. You learn by immersing yourself in the environment where you will sink or swim. That’s why walking, bicycling, and motorcycling are better educators than cages, but it’s also why we’ve become a nation of pampered, lazy, uneducated spoiled brats who are non-competitive, trailing-edge, and have traded democracy for idiocracy. 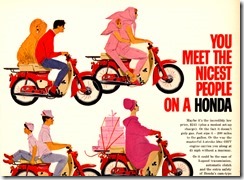 I’m not convinced motorcycles have a future in the industrialized world. When the only people who can afford the average motorcycle are the 1%, the market has shrivelled to unsustainable. There was a reason Henry Ford paid his workers enough that they could buy the products they built. There was an even better reason Honda tried to market their 1960’s motorcycles to “the nicest people.” Today, a reasonably practical new motorcycle costs at least $5,000 and that same money will buy a decent used car that will get the same or better fuel mileage, last longer with less maintenance, and be useable year-around.

I really believe it’s time to experiment with the whole motorcycle paradigm. I know of more than a few young people who could be tempted to obtain a motorcycle license before they mess with a car license. They might not ever bother with the car license, given mass transportation access and automous cars. While some people imagine that “drivers’ education courses” in high school or privately provides some level of competence, that would just be more of that silly idealizing-high-school crap. Drivers’ Ed courses are notoriously taught by the guy who couldn’t clear the lowest bar in teachers’ education, worse than phys-ed, and the classes are barely a joke, academically or practically. Currently, all licensing testing is designed to put butts in seats as efficiently as possible. Safety and competence isn’t any significant part of either drivers or motorcyclists training. That could and should be changed. Completely decoupling the cage license from motorcycle licensing could provide an opportunity to enhance all aspects of motorcycle training, which would make both motorcycle and car licensing more productive. Obviously, tiered licensing only makes sense. I can’t think of a single good reason to put a new motorcyclist on a liter bike; or a new driver in a 2,400 kilo SUV.

Electric motorcycles might make even more sense than electric cars, given the fact that most motorcycles don’t travel more than 1,500 miles a year and the advantage motorcycles could have in parking, lane-sharing, and storage. An electric motorcycle with a 150 mile range would more than do the transportation job for most people and a $0.06 fillup would just be icing on the cake.