Sorry about the long pause. The news has been oddly less interesting to me since it stopped being a job function. I’ll try to do better.

Valentino’s Ranch
Three years ago, Valentino Rossi bought a big chunk of land near Tavullia, Italy, developed a good bit of the property into a dirt track he calls, “Rossi’s Ranch.” There is a fun video going around the web where he shows off his great track with some friends; Supermoto world champ, Thomas Chareyre, and Isle of Man TT movie star, Guy Martin. Of course, we’re all invited anytime we’re in the area. Just be ready to eat a lot of dirt because Mr. Rossi does not like being passed on his own track. 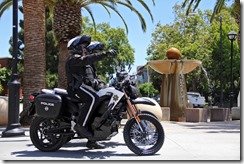 Wired Getting Wired for Six Months
Wired Magazine is doing a long-term electric motorcycle test on a Zero DS, dual-sport. You can read about the first installment at :http://www.wired.com/autopia/2013/07/zero-ds/ and the follow-up will be interesting. Even more interestingly, the San Jose State University has put two 2012 Zero DS bikes into full-time service on the campus. The Hong Kong government has purchased 59 MY 2012 Zero S motorcycles
as part of Zero’s single largest fleet sale to date. Most of the units will be used by the Hong Kong city police, but a few will be designated for the airport security forces.

Congress Does Nothing for Motorcyclists, Too
“U.S. Reps. Michael Burgess (R-Texas) and Tim Griffin (R-Ark.) are serving as co-chairmen of the Congressional Motorcycle Caucus for the new 113th Congress, the American Motorcyclist Association reports. The bi-partisan caucus, which has existed for many years, was formally recognized by the House for the new Congress. Official caucuses must register and be recognized at the start of every two-year Congress.
The caucus is made up of members of Congress who are passionate about motorcycling and who work to promote the interests of motorcyclists.“ This is the same congress that passed fewer bills than any group of lazy assholes in recorded US history. I can’t wait to see what they don’t do for us next.

The EPA Oversells Ethanol
“The U.S. Environmental Protection Agency said that demand for ethanol-related fuel probably isn't enough to meet the requirements of federal law and changes may need to be made next year, the American Motorcyclist Association reports.” The agency admitted that “"the ability of the market to consume ethanol in higher blends such as E85 is highly constrained as a result of infrastructure- and market-related factors. EPA does not currently foresee a scenario in which the market could consume enough ethanol sold in blends greater than E10, and/or produce sufficient volumes of non-ethanol biofuels to meet the volumes of total renewable fuel and advanced biofuel as required by statute for 2014. Therefore, EPA anticipates that in the 2014 proposed rule we will propose adjustments to the 2014 volume requirements, including the advanced biofuel and total renewable fuel categories."

In other words, there are more reasons that the damage done to motorcycles and pre-2004 vehicles (and, possibly, all vehicles) that adding more ethanol will result in a consumer revolt. Even with the Monsanto congressional connections pushing ethanol on us as if we desperately needed faster rusting gas tanks, damaged engine parts, and dissolving hoses, the EPA got the message and that is nothing but good for the rest of us. Fuck Monsanto and their corporate farm constituents. Now we need a few more stations selling E0 “blends” so we can keep the machines we own running longer. Now that would be an energy savings.

Elkhart, IN, Shuts Up Motorcycles and other Disturbers of the Peace and Discovers . . . We Really Are Hooligans
In 2008, Elkhart Mayor Dick Moore told the Common Council: “We are determined to eradicate noise pollution in our city, from boom boxes, broken mufflers, train whistles, loud motorcycles, and other sources by initiating a zero tolerance noise ordinance.”

The fines not only deter noise and punish noisemakers; they also fund the anti-noise program. Noise fine revenues have been used to purchase and equip three unmarked police vehicles, as well as to purchase dozens of black and white units with the latest computers, video, and recording equipment. Noise fine revenues are also used for anti-noise billboards and public service announcements.

Fines for noise violators in Elkhart are stiff:

Elkhart officials are enthusiastic about the anti-noise program. According to Police Chief Dale Pflibsen, “Elkhart’s nose ordinance has had a positive impact on the city’s quality of life.” Tim Balyeat, Elkhart’s assistant police chief, commented that “since the inception of the anti-noise program, Elkhart has become a quieter place to live.”

Bradley Vite, an Elkhart resident who led the campaign to institute the policy, said that “Elkhart’s anti-noise program is a great tool to reduce crime. Elkhart’s anti-noise officers have found meth labs, marijuana, cocaine, weapons, and individuals with outstanding warrants. Noise is a quality of life issue.” In addition, Vite noted that "noise has economic implications for a city, as it drives down property values.  Noise is a very serious health issue.  Noise is a growing concern throughout our country in the 21st century."

Vite concluded, "The actions of city government and the police have dramatically reduced noise. However, it is an ongoing, daily effort to maintain civility on our streets."

Triumph 2012 Speed Triple & Daytona 675: The motorcycles may have been assembled without a guide for the throttle cables. Without the guide, the cables may move freely and become trapped in the steering stop, impeding the steering operation and affecting the driver's ability to control the motorcycle, increasing the risk of a crash.

Triumph 2012-2013 Speed Triple ABS: The transmission on some motorcycles may have been built with an incorrect detent spring. As a result of the incorrect spring, the transmission may inadvertently shift out of gear while the motorcycle is moving, increasing the risk of a crash. Triumph will notify owners, and dealers will install a revised detent spring, free of charge.

Triumph 2012-2013 2012-2013 Explorer and Explorer XC: The Gross Vehicle Weight Rating data on the certification Label is incorrect. Thus, the motorcycles fail to comply with the requirements of Part 567, "Certification." The incorrect label could cause the operator to overload the motorcycle which may result in handling issues and/or tire failure, increasing the risk of a crash. Triumph will notify owners and replace the labels with corrected GVWR data.

Zero 2013 FX motorcycles: A manufacturing defect with the sealant material in the battery may allow water to penetrate the battery and contact the cells. Water penetration into the battery may lead to corrosion of the cells, possibly resulting in a rapid temperature increase and off-gassing of the cells' electrolyte which may cause a burn to the rider. Zero will notify owners and dealers will replace the battery modules, free of charge.

Honda 2014 CTX700: Due to a manufacturing error, the Anti-Lock Brake System (ABS) may malfunction and lose anti-lock functionality. The anti-lock function may not perform properly allowing for wheel lock up and skidding, increasing the risk of a crash. Honda will notify owners and dealers will replace the ABS modulator, free of charge.

I'd love a tougher noise ordinance in our city - I guess that makes me entirely too boring.

+1 on tougher noise ordinances. And thanks for the link on the Wired test of the Zero. If only they weren't so expensive. I told that all of the gas sold in AK is E0, I would have thought that MN would have similar issues...

PassTheWheel--Preparing the Drivers of Tomorrow

PassTheWheel provides you with online practice test questions which mimic the types of questions you will be asked when writing your knowledge test (written test).
Each driver's license practice test is individually crafted and always updated to help you practice all the questions for the Official written test that you want to acquire in your region.
Just visit us at http://www.passthewheel.com/ and take an online drivers exam.

Great. A service that makes our designed-for-retards license testing even easier. Just what the world needs.