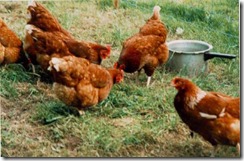 [I wrote this for the national MSF (Motorcycle Safety Foundation) Newsletter, it appeared in the August, 2002 issue.]

Years ago, a friend who owned and managed a small manufacturing company described his management tasks as being something like "herding a flock of chickens." Since, at the time, I was pulling similar duty as a manufacturing engineering manager, the analogy has stuck in my memory. It all came back, painfully, during my 2002 Minnesota IPC student teaching extravaganza.

The morning class had a group of students who could make spaghetti out of pool cues. As an example, let's imagine that I led each of them by the arm to a point on the ground marked with a big X and said, "You, stay here until I tell you to move to the next spot." Then, I would walk to another large X and pointed to that marker. When I turned around to tell the group to move to that marker, you could bet your month’s paycheck that most of those folks would be wandering around in circles somewhere near the freeway. They were mystical in the manner that they interpreted simple instructions. They could turn any maneuver into a practical demonstration of modern Chaos Theory. But I learned more lessons in crowd control from that class than I’d learned in 25 years of industrial training experience.

I learned a lot about how to pick a group leader, for instance. From what I learned in that class, any faith I once had in the future of democracy dissolved. There are two polar-opposite leaders who will create equally disastrous results in completely different ways. First, I selected the most timid, slowest rider in the group, partially because she was so far behind her group that I had time to completely describe the maneuver I wanted her to perform before the rest of the group formed a line behind her. Little did I realize that "angle across the oval to the opposite side and ride around the course in the opposite direction" could be interpreted as "start making irrational maneuvers all over the range until you run over one of your instructors." By the time I remembered I had a whistle and blew it to stop the motorcycling spasms, I had students scattered all over White Bear Lake. Not the range, but the city.

So, learning something from my mistake, I figured I’d try a completely different tactic the next time around. There was a good reason why I’d decided not to do this the first time, but I discarded that logic since my first plan was so obviously flawed. I picked a guy who was taking the class to provide comfort and support to his wife. He was obviously a cruiser-kind-of-guy, who was growing increasingly bored with our exercises and was practically chewing up his helmet strap waiting for a chance to show us what he could do with a motorcycle. I knew that, way earlier. Accordingly, I had decided to keep him in the middle of the pack to put a leash on his enthusiasm, but I didn’t stick with those guns. No, I handed them over to him, with the instruction to "ride as slowly as you can, across the oval to the opposite side and ride around the course in the opposite direction." Twenty-one milliseconds later, he gunned his bike, dashed across the oval, smack into the middle of the slower half of riders still going the original direction. Then, he got confused and began to make random figure-eight’s all over the range until I blew the whistle, signaled all-stop, and started pounding my head into the asphalt as a subtle indication of mild frustration.

Herding chickens, that’s what we’re doing in the Basic ("beginning") Rider Course. Not always, but enough of the time that it’s important to remember how chickens think. I think the only well known chicken quote is "the sky is falling, the sky is falling . . .." and so on. Our job is to keep the chickens busy enough that they don’t have time to look up or worry about the condition of the sky. If you identify a student who takes direction, pays attention, and can lead the group through reversals and into the staging area, don’t press your luck. Keep using that student until someone complains. If someone complains, listen politely, nod your head, respect their opinion, and stick with your lead student until the Skills Tests are finished, the RXs are signed and distributed, and all of the bikes are back in the trailer. Then, assign the guy who complained to lead the group back to their cars.

That’s my opinion, but I could be wrong.