From Biker News out of Colorado comes this hilarious piece: "Cop Biker Clubs Draw Unwanted Attention."  My favorite line in the article was, from Michael Koepke, vice president of the Yavapai County Hells Angels chapter, "They give a bad name to motorcycle clubs." I wonder if Koepke knows the meaning of the word "ironic?" 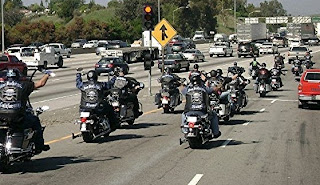 The gang in question, the Iron Brotherhood, is being investigated for a few reasons, the most recent being a Prescott, Arizona bar brawl that resulted in at least one brawler being hospitalized. The gangbangers being prosecuted are "Tarzan, Mongo, Guido and Top Gun." These knife-wielding, brass knuckled, Harley Davidson riding, patched and tatted bangers had day-jobs as a police chief, a county sheriff's sergeant, a police officer and a paramedic.

The intro to the Brotherhood's website claims, "The Iron Brotherhood MC was founded in January 2006 by Law Enforcement Officers and former members of another LEMC. The purpose of this club is to promote brotherhood among like minded brothers who enjoy riding hard, working together, and sharing in a tight knit brotherhood. We are bikers who happen to be cops who share a common bond. We are dedicated to our profession and our brotherhood . . . "

As you can see from their very friendly looking logo, these are upstanding members of society who make a valuable tax-collection contribution, most likely scaring the shit out of every citizen they stick with traffic taxes (the accurate description of what "serve and protect" too often means in the real world).

A big part of my general dislike for police of any sort is based on a lot of past history. Too often, small time bullies get badges and become professional bullies. That is the talent and psychological pool most police departments are all too happy to draw from. Having had about two dozen local police in my experience riders' courses over the years, the fact that the overwhelming majority are proud to be sporting grossly illegal pipes on their grossly mal-designed hippobikes and are every bit as vested in the badass biker image as the characters the FBI has labeled a "terrorist threat" and are listed in the NCIC Violent Gang and Terrorist Organization File (VGTOF). In my wife's words, this is just another group of "excess males" behaving as if they are rogue cats in an over-crowded barn.
Posted by T.W. Day at Sunday, August 18, 2013

A family oriented group out to ride their bikes and abide by the law? No problem. But a bunch of dumb-ass-wanna-bees thinking they are above the law? They deserve instant dismissal.
Sometimes certain careers and certain pastimes do not mix.

I think its great, Law enforcement officers are people too. they deserve to be normal honest citizens just as all of you do.