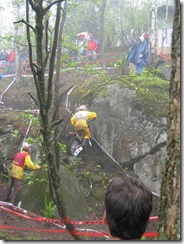 [Due to a website snafu of entirely my own making, this beautifully written, totally professional article (Geeze, I'm joking.) didn't see the light of day until nearly a year after it was written.  However, I still like it and proudly present it here, in its original glory for your consideration.]

Last year, Takahisa Fujinami told us that he likes the United States “very much.” He says it’s because he likes American food, especially breakfast (“ham, eggs, and toast”), but I think it’s because he can beat World Trials Champion Doug Lampkin here and has done it three out of four times in the last two events in Duluth. Victory adds a positive aftertaste to just about any meal, even, or specially, breakfast in Duluth.

Due to the success of the 2002 and 2004 events, the Duluth trials organizers were awarded with a third FIM World Trials event, that will be held early this June. The Spirit Mountain course went through dozens of tweaks during the weeks before last year’s event. Steve Alhers and his team combined natural terrain and two “stadium sections” to reduce the hiking spectators would have to suffer. Friday, the FIM inspectors made a lap around the course and did some tweaking of their own. I was amazed that anyone would think this course needed to be more difficult, but they did. Later in the day, the riders made the same lap and there were comments on how the course was “too easy.”

The Iron Range accommodated the riders by provid 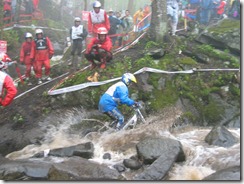 ing ten hours of hard rain from early Saturday morning until a little before the last rider struggled through section fifteen late Saturday afternoon. Lampkin’s press release called it a “torrential rain,” but it just seemed like a normal Minnesota drizzle to me. One section was so hard core (submerged in 4’ of fast moving water) that the FIM closed it after the first rider practically drowned. By the second loop, all of the top riders were “taking fives” on at least one other section because it was impassable, even for the world’s best.

One section that they did ride, section three, was so complicated that Doug Lampkin, the world champ, crashed into a wall, broke his forks, and injured his right leg. That crash cost him a dozen points as he recovered, five’ing the next section and following it up with a five on ten and a pair of threes on six and eight. When the day was finished, Lampkin was still only eight points back of Fujinami (45 points to 53), but he was off the podium and the championship race tie was broken with a Fujinami lead of seven points. England’s Graham Jarvis (49 points) finished in second and Spanish “rock star” Adam Raga (52 points) finished third. The only North American competitor, Chris Florin, finished with 158 points). 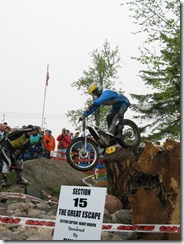 The wet weather was especially hard on spectators slogging through intermittently marked trails, sliding and stumbling from section to section, often arriving at the section in time to see the last champ rider vanish into the mist. However, Martin Lampkin, the ex-champ and father of the current champ, said this was “real trials” weather and commented that spectators were privileged to see the world’s top riders struggling with the weather and terrain. He wasn’t being politically correct or condescending to the even. I heard the same sentiment repeated by Spanish, Japanese, and other international trials experts.

Lampkin was still limping as he walked the early Sunday sections. But he was back into his game quickly and Sunday was a totally different day, weather-wise. Sunday’s fog and rain were replaced with bright sunshine and considerably more heat than I’d expected for early June in Duluth. That did a lot to reduce the problems for the riders, too. Fujinami’s 45 Saturday score earned Marc Freixa a seventh place finish on Sunday. A little change in surface conditions goes a long ways in world class trials.

Saturday’s section-by-section battle between Fujinami, Lampkin, and Raga was unbelievable from the first section to the end. The lead changed several times and spectators were running from section to section to see the action. Scores of the top three riders, through two laps around fifteen sections, were 15 and 17 points. Lampkin misread a section and crossed the tape, thinking the section was the same as the previous day. In the press conference, Fujinami admitted he would have made the same mistake if Lampkin hadn’t gone first through the section. That mistake cost Lampkin 5 points, which more than gave Fujinami the points he needed to win the day and the Wagner Cup for the total event win. Saturday ended with Fujinami in first (15 points), Lampkin in second (with 17 points and 23 clean rides), and Raga in third (with 17 points and 21 cleans). Fourth place was Albert Cabestani with 33 points, to give you an idea of how tight the top three positions throughout the day. Chris Florin, again the only North American rider, finished 16th of 16 champ riders with 133 points. 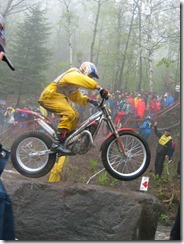 I was told, repeatedly, that US riders don’t participate in world events because they don’t want to be embarrassed or jeopardize their endorsements. Florin is the #4 US Champ rider and if his finish was an embarrassment, you’d think those who didn’t find the time/motivation/guts to take a shot at competing with the world’s best would be even more embarrassed by their absence. Last year’s standing US champ, Geoff Aaron, was in Duluth, putting on a stunt demo at Grandma’s Sports Bar and trying to obtain a press pass to the event. If the other top US riders were in town, I missed seeing them, but they were missed in more ways than they know. Chris was cheered every time he rode, regardless of how he finished the sections. He wrestled with 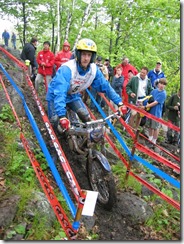 terrain that was impossibly more difficult than typical US champ sections and never gave up. By the end of Sunday, he was more angry than defeated when he failed to complete a section and was riding with more confidence and purpose at the end of Sunday than at the beginning of Saturday. The only way to be the best is to compete with the best.

For the spectators who braved Saturday’s rain and fog and Sunday’s mud and heat, this was the most incredible Spirit Mountain trials event yet. When I got home, I shagged out in front of the idiot box and saw an ad for a new Jackie Chan movie; and was bored. After a moment, I realized I’d seen all those moves, live and on a motorcycle, dozens of times through the weekend. Real life tops Hollywood special effects every time the world’s best trials riders are in Duluth.