We’re lucky to have a great local bookstore in Red Wing, Fair Trade Books. Rick, the owner, is heavily invested in the city, culture, and the local arts scene and one aspect of that is an open mic the bookstore hosts on the first Thursday of every month. The “audience” is mostly made up of people who are waiting to perform some music, read a bit of poetry, do some piece of improv, perform magic, read a chapter of a book they’ve just written, or tell a story.

Several months ago, I conned myself into thinking this would be good motivation for me to learn some songs, practice my guitar, and force myself in front of an audience after a 30 year much-appreciated-by-everyone hiatus from that sort of thing. I worked up a favorite Dylan song and a J.J. Cale tune I’ve fumbled with for almost 35 years. It was a disaster. I couldn’t see my sheet music and completely failed to remember the lyrics after practicing these two songs for at least 50 hours. I completely and totally sucked. I have always hated playing for an audience, even when I was doing it 3-5 times a week in my musical “prime” and nothing has changed over the years. I still hate it and am scared shitless for hours before and after anything that resembles a performance. All of that would be just a bit of the reason I ended up on the tech-side-of-the-glass in recording studios and live music. 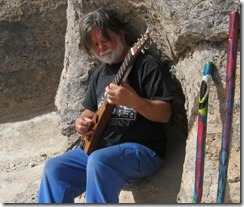 So, I put away the guitar and having done much more than occasionally dust it since. I still have some hope that I might start playing again, just to entertain myself, but those few minutes in front of an incredibly supportive audience about drained that desire from my psyche. I played the shit out of my nasty Martin Backpacker the winter we spent lounging around Elephant Butte Lake, New Mexico and when I got home I gave that rat-bastard instrument to my granddaughter and replaced it with a terrific sounding and playing Composite Acoustics Cargo travel guitar. It would be a shame to have wasted that effort.

However, the brilliant and generous guy who ran the open mic night for Fair Trade moved to Sweden and Rick rang up all of the past contributors for last Thursday’s event to make sure it didn’t die. I thought about fighting my stage-frightened demons and trying another song, but I didn’t have the guts. So, I printed off a handful of old Geezer columns and a pair of yet-to-be-published rants and offered to read myself as a “talent.” Oddly, it turned out that my MMM column had some fans in the audience. I read a really nasty rant that has yet to see the light of day, even though it’s been in the publishing cue for about a year. Maybe it’s too negative, but the audience seemed to be either entertained or intimidated. I’m not subtle. I can’t tell the difference. I think I might do it again next month.

I “read” the stuff I write internally dozens of times before I hit “send” and stick a piece on the cloud for my editors to pick through. Turns out, that isn’t the same as reading the work out loud. I think I’ might have absorbed a new disipline.