The two go together like politics and corruption, right? You can't ride a motorcycle for any serious distance without the assistance of the coffee bean. More importantly, I don't.

I was slow to my coffee addiction. Until I was in my late 30's, I hadn't messed with coffee (or any other stimulant) and couldn't see a reason for doing so. My argument was "I might need my adrenal gland for something real someday, like running from rabid dogs. I want adrenaline to work when I need it." Robin Williams' statement about coke ("Anything that makes you paranoid and impotent, give me more of that.") seemed to apply to me, too. That was a good argument when I was young, active, still producing snippets of testosterone, didn't have a titanium ass, and practically jumped out of bed in the morning "ready and raring" to get on with my day.

I am no longer that jackass. Today, I desperately need a service person (preferably someone young, attractive, female, and scantily clad) to administer some kind of combination of lubricant and pain reliever to most of my joints so that I can carefully ease my busted body out of bed with minimal shock and the complete opposite of awe. Once I'm mobile and wandering around the house aimlessly, I need caffeine to provide whatever focus I'm going to have for the day. And you know that I know the difference between "need" and "want."

I know. I'm kidding myself. This is another example of doing something stupid simply because it is easy, more fun than the alternatives, quick, and effective. A real man would kick himself out of bed, do fifty pushups and one-hundred setups before going to the kitchen and downing a blended concoction of organic carrots, a banana, blueberries, a raw egg from a free-range chicken, extract of Eurycoma longifolia root, and unflavored protein supplement. Screw that, I grind up some fresh Ethiopian coffee and give my adrenal system a beating it won't forget until bedtime. If the coffee washes down a couple hundred miligrams of naproxen sodium, I can ride twenty hours alertly and relatively painlessly. Double the naproxen dose and I can crisscross Alaska in two days with a broken finger, a separated shoulder, and some cracked ribs. At least I did in 2007. I'm assuming similar capabilities today, minus five years of wear-and-tear. 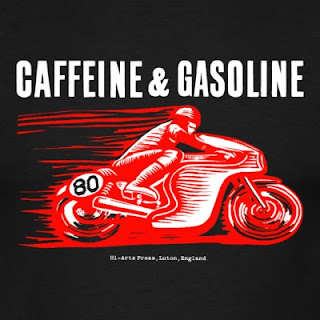 I got into coffee during my last year as a full time student in 1990. I was working 50-hours-a-week as a manufacturing manager and taking 12-15 units of evening classes at UCLB. Some of my classes started at 7PM and most weekdays I made it away from the campus near midnight. That left me with about five hours a weekday for sleep, assuming I did no homework. I was driven to be on the Dean's List, to justify being so late to an undergrad degree so I did a lot of homework. At the beginning of that year, I struggled to stay awake in my later classes. A friend introduced me to the school's fine cafeteria and their excellent fresh roasted South American and African blends. I did not have the drowsiness problem again, but I often did stay up doing homework until 3AM.

All that in the past, I really fell in love with coffee in Denver in the 90's. A friend's girlfriend invited a bunch of us to Saturday morning coffee at her new shop on the edge of Cherry Creek North. When I told her I drink coffee purely for the energy hit, she poured me a big cup of an Ethiopian blend. Not only was that the best tasting coffee I've ever had, but the stuff packed a punch.

A while later, we all split, some of us heading south on Colorado Boulevard on our way to Colorado Springs and a ride up Pike's Peak. I was on a friend's Honda NT650 Hawk, a bike he never rode and one I loved at least as much as my Yamaha XTZ550 Vision. As usual, the pack was slow to leave the parking lot and I was on the road a bit ahead of them. I was enjoying the caffeine buzz and the perfect morning mountain air, when a siren fired off just to my right and a fire truck jumped into my lane not more than 100 feet in front of me; probably less. I nailed the Hawk's wonderful brakes, doing a front wheel stand-up that would have made Robbie Madddison proud. At least, I wouldn't have embarrassed him. Much.

The driver had stopped in the middle of the road, when he realized he had barreled out of the garage with no warning and was about to plow into heavy north-bound traffic. I don't think he saw me, at all, until we were eyeball-to-eyeball with the Hawk's back tire three feet in the air and my full-face helmeted head staring at him, just a little pissed off. I was no more than a dozen feet from the fire truck's driver's side door when the back wheel bounced back to the ground. I have never seen bigger eyeballs than the fireman was wearing that morning. Fortunately for both of us, I had no close traffic behind me to add to the excitement.

As soon as the Hawk's suspension settled down, I pumped my right arm and hollered, "Fuck me! Let's do that again!" I was so jazzed up, I really did want to do it all over again, to see if I could stop even closer to the fire truck. I don't remember saying anything, but the guys I'd left at the coffee shop had caught up just in time to see the Hawk touch ground and to hear me. One of my friends sent me an email, with that line as the subject, on my birthday for several years afterwards.

I learned two valuable lessons from that experience: "There is no such thing as too much caffeine" and "I love the 1988 Honda Hawk's brakes." You might think there could be more to take away from an experience like that, but . . .