Minnesota's most famous citizen once wrote, "Something is happening here, but you don't know what it is. Do you, Mr. Jones?" After a few years of talking about why motorcycles don't get decent fuel economy, Honda went behind my back and did something about it. I didn't even notice, until a friend bought an NC700X and wrote, "Got over 2,000 miles on the bike. Last 3 fill-ups I got 77, 79, and 92mpg." Even though Honda had advertised the bike's economy at 64mpg, a lot of new owners have been surprised with significantly better mileage over a wide variety of conditions. I hope this series of new-breed-motorcycles aimed at motorcyclists in the 21st Century has the success it deserves. For decades, we've been served motorcycles that concentrate on performance and, mostly, ignore fuel economy. Even small bikes, like my Yamaha WR250X, barely improve on the 35-45mpg standard motorcycle efficiency expectation. A few years back, I did a review of Motorcycle Consumer News's bike spec wrap-up and found that fuel economy was actually declining as fuel prices increased. The best mileage bikes in their spreadsheet were mediocre performers relative to economy cars.

Reality-deniers aside, fuel is only going to become more expensive. We are on the downside slope of frantically scratching out the last bits of fossil fuel for increasingly irrational costs and vanishing energy efficiency. Oil companies are making another round of the near-empty wells throughout the Midwest, siphoning the last drops with pumps that haven't been powered up since the 70's. We're drilling two miles down and two miles across to tap into the Bakken formation's barely-accessible reserves for negative energy returns to encourage the illusion that the country is "energy independent." Economically, other industrialized nations are leading the move away from inefficiency and obsolete technologies while we pretend that shuffling over-hyped paper is actual work. With all that in mind, someday soon a liter sportbike that barely manages 20mpg will be about as Craig's-List-able as an electric typewriter or a sewing machine.

The two efficiency problems with motorcycle design are (1) the fact that "you can have power or you can have economy" and (2) motorcycle aerodynamics are, as Kevin Cameron described, "ugly . . . [compared to] cars, which can have very much better drag coefficients even though their frontal areas are greater." In the past, the majority of motorcycle engine designs have been about power and appearance, mostly neglecting economy.

With the NC-series (New Concept), Honda only sort of goes after aerodynamics with the stock fairing design, plus accessories like a taller windshield and upper and lower cowl deflectors. That's not going to return many efficiency returns because the human body is about as aerodynamic as a flag. Unless we're willing to can ourselves into bullet-shaped containers, aerodynamic improvements may be minimal.

So, Honda attacked the problem from the engine design direction. As one reviewer put it, "This has the potential to be the most significant motorcycle engine of recent times." The most simple explanation of the NC's motor is that Honda designers halved the four-cylinder motor used in the Jazz and the Fit and stuffed it into a motorcycle frame. It's more complicated than that, but only because the sawed-in-half motor wouldn't hold fluids. Otherwise, there are more similarities between the two vehicle power plants than differences. The NC's engine bore and stroke (73 x 80mm) are the same as the Jazz car engine; as are many of the engine components and the 6,500 rpm redline and 3,000 rpm shift-points and torque curve. A single throttle body feeds both cylinders in a 270-degree crank configuration. The pistons are coated with a low-resistance resin and the rockers are on roller bearings to reduce friction. There is a single counter-balancer to reduce weight and friction. This engine was designed, primarily, for fuel efficiency while hanging on to the fun-factor, secondarily.

While developing the NC-concept, Honda did something weird; the company's engineers studied what motorcyclists do with their motorcycles. Honda's research determined that riders spend 90% of their riding time well below 85mph and designed the NC accordingly. Honda claims the bike gets to 75mph faster than the CBR600, with the theory being that everyday riding won't feel inhibited by the high efficiency design. The motor produces 51hp, which isn't chicken feed by cruiser standards but the design's intent is to provide cage-like performance while retaining the fun of two wheels. 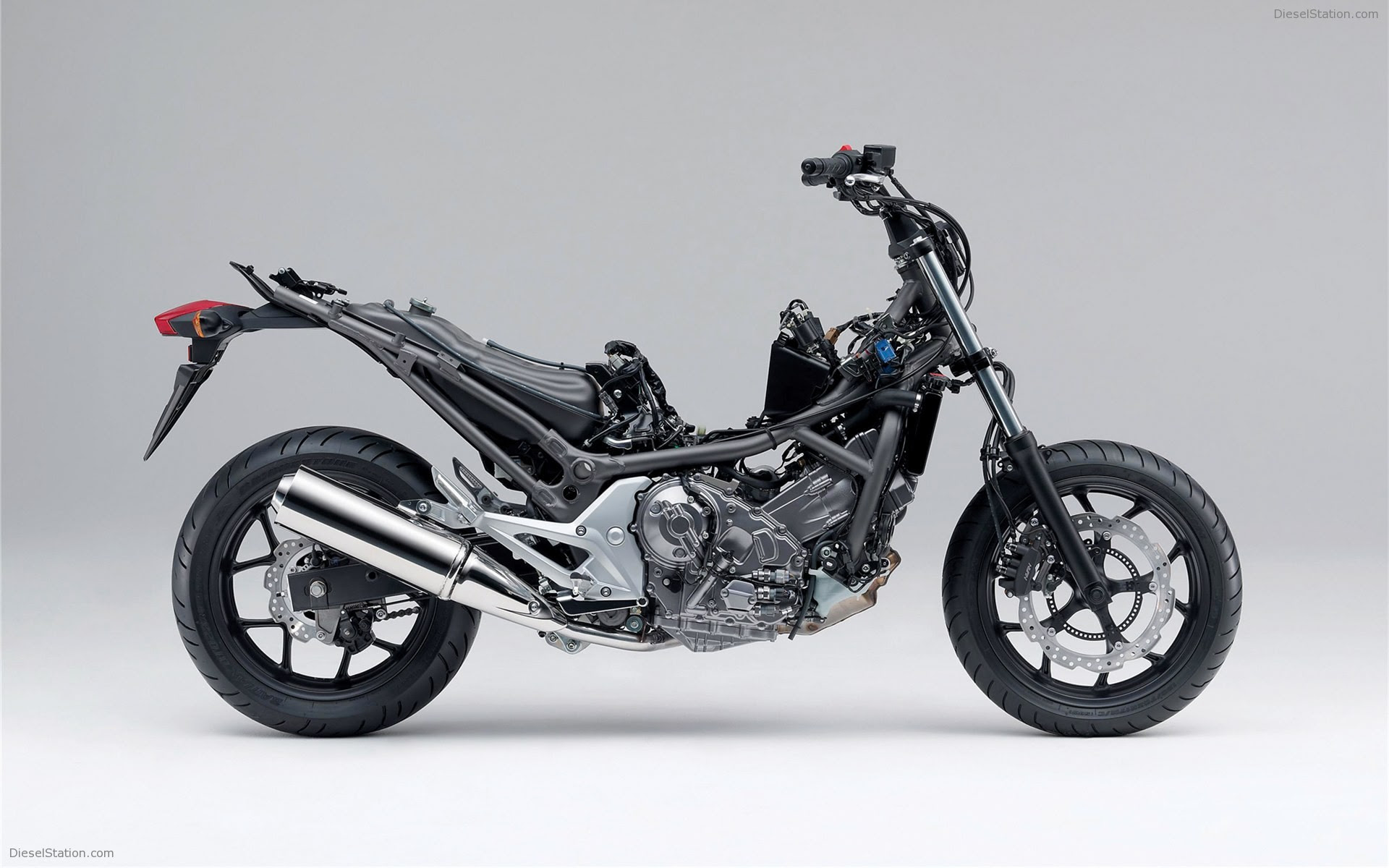 The rethinking didn't stop with engine design, either. The NC's frame is described as "the platform," car jargon, because the concept's platform had to be suitable for three significantly different vehicles (the NC700X/NC700S/Integra scooter, the last two models are not exported for the USA markets). The area between the seat and the handlebars no longer contains fuel, but has become a very useful storage area sized to hold a full face helmet. The fuel tank is under the seat, lowering the bike's center of gravity and improving the low speed stability and handling.

Based on review comments, I suspect it will take a few generations of this kind of bike before the hooligans who make up the majority of bike reviewers get it. Practically every new idea in motorcycling has met with derision from the press and this one won't be any different. With that in mind, I suggest that, if this approach appeals to you, you read as little as possible about the bike and go ride one.

For the last several years, I've expected motorcycling to slowly vanish into the buggy-whip territory of obsolete-toys-that-rich-guys-still-play-with. Smart roads don't include motorcycles in their design parameters. If the NC makes a dent in the market, Honda may have put some future into motorcycling's future.