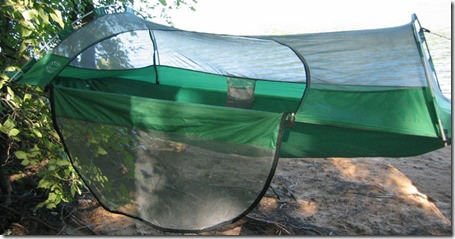 I admit that I'm a camping wimp in my old age.  I used to enjoy sleeping on the ground after a long day's hike or ride, but I have too many marginally healed bones, worn out joints, and a fragile back.  The basic camping adventure is outweighed by the pain and lack of sleep.  So, a couple of decades ago, I started carrying a small nylon hammock in my gear and a nylon tarp in case it rained.  I sleep like a baby in a hammock and am about as happy swinging from a tree as I am in a Motel 6 (except for the lack of hot showers) .

A few years ago, on a business trip to Florida, I found myself with a few spare days to burn in the Keys.  After renting a kayak and setting paddle for some small islands, I bumped into a camper comfortably holed-up in a really cool looking hammock/tent.  He was hanging from a clump of Mangrove trees, suspended over the water, reading a book, and ignoring the cloud of bugs that were attached to the hammock's mosquito netting.  Back home, I searched for the kayaker's gear on the Net.  I found several tent/hammock manufacturers and Backpacker Magazine had done a "shootout" a couple of years earlier.  That article pointed me toward the Lawson Blue Ridge Camping Hammock.

During last year’s 4th of July holiday, I did a two day trip to the Apostle Islands where the camping conditions were varied enough to constitute a motorcycling "test" of my hammock.  Day one, the temperature was in the mid-90s most of the day and the Minnesota state bug/bird was in full attack mode.  The only way I could get any rest outdoors was to quickly put up my hammock and dive into the protective netting.  The fact that I could find a site, put the unit together (in a way that provided comfort and a view), and load it and seal it up with myself and my reading material in less than five minutes made rest stops practical. 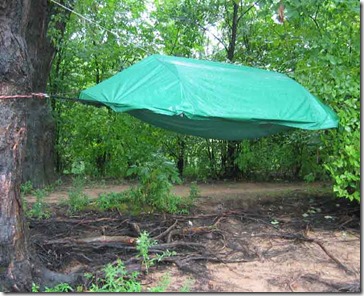 Friday night, my island was hit with a rain storm that left the ground soaked and littered a few leaves on the rain fly, but I slept through it and can not report on the storm's severity.  In the morning, I was dry and comfortable and that's about all I can tell you about the night's weather activity.

Saturday night, I thought I’d found the perfect isolated campsite until about 4AM when some drunken brats showed up in their shiny new brat-trucks.  I gave up on sleep and fired up a reading headlamp and finished the book I'd started earlier that day.  About 20 minutes after the brat-pack got their mini-forest fire started, a monsoon blew in to our corner of the island.  The weather flipped from calm and mostly warm to gusty, pouring rain, and downright cold in about ten minutes.  The brats ran for their club cabs and watched their campsite and most of their food blow into Lake Superior.  Screaming obscenities, they drove back to mommies' hotel room or wherever morons go for shelter. 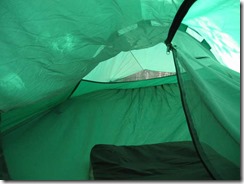 I buttoned up the rain fly and swung in the wind for the next hour or so.  Lightning was so intense (and close) that I could read by it through the netting and rain fly. Other than being a bit nervous that the trees I'd tied myself to might end up blowing out to sea, I was comfortable through the part of the storm through which I stayed awake.  I drifted off and the sun woke me up about the time my stomach began its usual demands for food.

I'd parked my bike on a large flat rock, so it was where I'd left it and the buttoned-down rain cover had kept my gear dry and in place.  There were several trails of moisture from the sides of the hammock to the low point of the hammock, about where the middle of my back had been during the night.  My bag and back were slightly damp and I was a little chilled.  The temperature had dropped to the low 50s during the night and I'd have been chilled without being a little wet.

The hammock, poles, and rain fly fit, without the stuff sack, in one side of my Eclipse P-38 saddlebags.  There is room for a light blanket, a sleeping bag liner, or a small amount of gear in the same bag.  The hammock weights about 5 lbs and (if you can't find trees to hang it from) can be used, with a couple of tie lines and four tent stakes, as a one-person tent.  For one-up adventure touring, I'm convinced that this is the way to go.  Now that my hammock has proven its weather resistant capabilities, I'm planning on a lot more weekend bike camping trips.

I concur on these modern hammocks. I have a Hennesey Ultralight Backpacker hammock and it is brilliant. You may need some insulation for your back as mine can be a bit chilly on your back as well. I've grabbed the underquilt from Hennesey for this. Beats sleeping in the snakes and other crawlies!

I have a Big Agnes bag with the envelope for a back pad. I agree, anything under about 55F and the pad is necessary. The cool thing about the BA bags is that the pad can't slip out from under the bag.

Good review. I haven't tried hammock camping but it may be something I should look into in the warmer weather. I will head to Hammock Bliss now to see what else they have to offer.

Thanks for share this article, it very useful for me.
I look forward to your new article.
read review