#5 Old Guys and Old Bikes, What's with That?

Most of my friends are over 40. Some are over 50, like me. The most curious thing I see in an awful lot of geezers is an intense desire to collect stuff from their youth. I'm trying to understand this phenomena.

Did other, non-Boomer, generations do that? OK, my mother and her friends packed their husbands' houses with overpriced wreckage they referred to as "antiques." They'd clutter our father's living rooms with rotting, rusting junk that had a quality and finish any competent cabinetmaker would describe as "bad." But these were bored housewives with grown and gone kids, nothing but network daytime TV to watch, and no decent hobbies to distract them from turning their homes into museums. That's dumb, but understandable.

I don't remember any of my father's friends getting wrapped up in the "good old days." Hotrodders don't count, of course. Those guys take rusted hulks with under-powered six-cylinder flathead motors and turned them into roaring monsters that Chrysler would be proud to call "The Prowler," if Chrysler had engineers who could build something that hot. And I'm sure as hell not talking about guys who can only afford one bike per decade and have to cobble stuff on to that sole ride to keep it current enough to satisfy their need for speed and handling. Or guys who keep patching up the old babe because nobody seems to want to make a bike that does what we like to do on bikes (everything from canyon carving to dirt biking, all on the same two wheels). 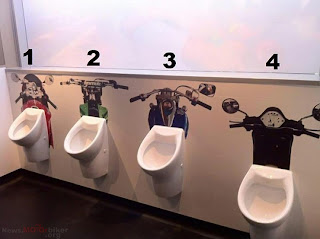 Nope, what I'm talking about are guys who have money. Guys who buy old bikes in awful, mediocre, or showroom floor condition and spend zillions to "restore" it to original condition. Guys who spend more money on restoration than a brand new, state-of-the-art, thoroughly rideable motorcycle costs. Even worse, guys who buy a brand new replica of a 1940 motorcycle for thirteen times what it would cost them to buy a modern motorcycle.

This is a freakin' national craze, you know? We have people paying a fortune for moldy Barbie dolls, baseball cards that were less important than the bubblegum they came with, and motorcycles that don't generate enough power to avoid being overtaken by geriatric bicyclists.

There are events for these "collectors." In fact, I used to go to one of them every year in Steamboat Springs, Colorado. For me, it was sort of like visiting a re-enactment museum by motorcycle. Although, after three years, I started spending more time in the hot springs Jacuzzi than at the "races." (I put races in quotes because some heats moved so slowly that younger spectators were out-running the bikes up the hills.)

As justification, some people call this I-miss-my-childhood hysteria, "investing." Apparently, they believe our kids are going to think "I wish I had as much fun as mom and dad did when they were teenagers?" Get real. No chance. Once we've gotten over "booming" nobody's going to care if we had Barbies, bikes, or Baywatch. Our kids have extreme sports and extreme toys. They'll have as much use for a 1971 Yamaha DT-1 as you and I have for horse drawn wagons and buggy whips. Don't tell me, your wife has a planted a buckboard in your front yard and stuck a buggy whip on your living room wall?