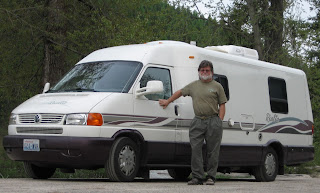 My wife and I are in the market for [gasp] a motorhome. We're approaching the point where we are going to have to make some big decisions about the next few years and one of the options we want to explore is living off of the grid (as in avenues and streets). I've picked a test model (the Winnebago Rialta 1996-2005, prefereably a 2002-2005) and the interior style (the HD or RD) and all that's left is to find a vehicle for the price I'm willing to pay.

Seems pretty simple, doesn't it? It turns out, nothing is simple except, maybe, being born or dying.

There is a lot to consider here. Mostly, where the hell does the motorcycle go? I mean, seriously, how can I live in one of these things if I can't figure out where to put the motorcycle? 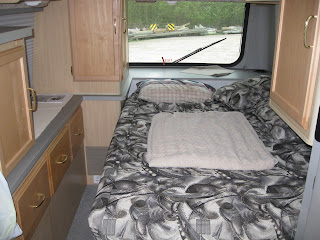 For the last 20 years, my wife has been more than a little jealous of my "adventures." She's not all that interested in the adventure part, but she has a fine idea of herself as a traveler and rarely going anywhere or doing anything has done some serious damage to that self-image. I'm good with a tent/bivouac and a sleeping bag, but she's pretty set on sleeping in a bed with solid walls around us (Notice the "us," instead of the more Geezer-friendly singular term?) On the other hand, I hate cages and was sort of looking forward to purging myself of all things four-wheeled in my geezerhood. A compromise is going to have to happen here and I suspect we all know what that means. (I give up some shit in exchange for a little peace and quiet.)

In the process of searching for information about these vehicles, we met a couple who are, probably, another decade or so older than us. (Imagine that?) Dave and Mary have had a great dozen or so years of retirement, motorcycling, full-time motor-homing, sailing the Pacific, and doing all sorts of cool stuff that most kids wouldn't dream of tackling. However, at 70-something David has worn out some parts and did a pretty good job of letting me know how near that moment will be for me. The moment when I have to decide if I can keep two-wheeling or if it's time to settle to call an occasional bingo game an "adventure." David has a couple of mangled discs, a bad shoulder, and failing eyesight. His mind is sharper than mine on my best day, but the body has taken a beating and the crows of some habits have come home to roost. Like a lot of us, he hates exercise and would rather rot than put in time on a treadmill or pumping iron. I can relate.

However, that is not a functional attitude. I've mentioned Younger Next Year: Live Strong, Fit, and Sexy - Until You're 80 and Beyond before and here it comes again. The older we get, the harder we have to work to get to do any damn thing. This isn't optional, although it sure feels like it. What happens if we don't keep cranking out sweat and putting up with the pain for the gain is constant deterioration. Nature pretty much says, "If you're not going to work at this, die you worthless old bastard." Even if you do work at it, the end result is deterioration, it just takes a little longer. If you look at the world and national weight lifting champions, the downsizing of expectations with age is relentless. The Snatch/Clean & Jerk totals for 35-39 year olds is 328kG, 55-59 year olds is 239kG, 65-69 years is 213kG, and 75-79 is 180. We keep working, but our body is designed to peak at about 27 (for me) and go downhill from then on.

All this is just another piece of evidence that getting old isn't for sissies. Tonight, it's back to the workout routine.

As for the motorhome, some kind of ramp will end up tacked to the back of the vehicle and the WR250X will live there except when I'm off on a dirt road and my wife is happily ensconced in a civilized campground with the cat and dog for company.
Posted by T.W. Day at Saturday, May 11, 2013