Gear Up or Else

One of my favorite motorcycle campaigns from the last decade or two has been the GearUpProject. I've been sporting one of their stickers on the gashed up side-panel of my V-Strom since I gashed it up (2007 or thereabouts). This group accumulates statistics on riders, crashes, and the effectiveness of gear. 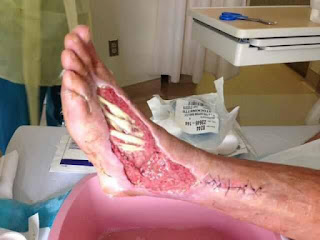 I stumbled on this sneaker/flip-flop wearer's pre-surgery/post-clean-up shot and it is a gross reminder of the high cost of hoping for the best and planning for the same. Nature loves vacuums and hates fools. Like my experience with scooter-ownership, if you aren't smart enough to imagine how much damage sliding down the road at 5-75mph will do to your skin, you aren't smart enough to ride a motorcycle (you can own one, just don't take it out of your living room). The old "Death on the Highway" films the Highway Patrol used to show to high school kids to gross them out and make them consider sticking with bicycles for a few more years before venturing on to highways in Mom's Buick, this kind of illustration is a good reminder of how poorly we are constructed. (NOTE: Someone sent me a note saying this was post-snake bite, rather than a bike related rash. I got the picture from someone and can't even find the original email. I did wonder why the bones weren't ground up. I'm having a bad computer day and managed to "delete" the correction email instead of "publish" it. Sorry.)

After stopping at Fleet Farm to grab some cheap synthetic oil (yes, they do carry several brands of 2-and-4-stroke motorcycle oil for cheaper than average prices), a squid on an R6 rolled in beside us (parking in a regular space instead of Fleet Farm's spacious and roped in motorcycle parking area) dressed in baggy shorts, a wife-beater, and flipflops. He inspired me to consider blowing up this picture (and a dozen other hospital shots into a "squid hall of fame montage") and turning it into a window poster to go along with a "Start Seeing Motorcyclists in Hospitals" sign. How dumb do you have to be to risk this kind of damage? 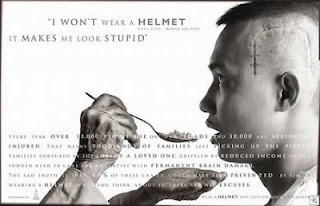 Driving the camper back from Washington, I was amazed at the number of people wearing helmets (in helmet law states) and going, otherwise, naked on motorcycles. Not coincidentally, I didn't see a single one of those characters showing a lick of skill on their motorcycles. There seems to be a link between riding unprotected and being talentless on a motorcycle.
Posted by T.W. Day at Saturday, May 18, 2013

Email ThisBlogThis!Share to TwitterShare to FacebookShare to Pinterest
Labels: aerostich, agat, all the gear all the time, boots, gloves, riderwearhouse