A while back, I read an article about bikers' opinions on the technical competence of Harley Davidson products. In the article, one character said something about the limitations of Harley engineers and another followed that up with "Harley has engineers?"

OK, I admit I not only thought it was a funny quote, but, outside of the suits and geeks who clutter up Harley's manufacturing floor, I pretty much agreed with the sentiment. A manufacturer that microscopically changes its design once every couple of decades (regardless of competitor activity, advances in available technology, or customer demand) isn't likely to have a pack of innovative and motivated R&D guys on staff. There are only so many ways you can dangle fringe from handlebars before you can pull every idea you need from old production drawings. But this isn't about Harley bashing, as much as that topic warms my soul.

The other side of that same slam arose this week as some guys I know were talking about Yamaha and Honda's failure to market some of their recent really interesting motorcycles in the US. Even worse, the coolest of their recent design output won't ever be seen in a U.S. dealer's showroom. Someone included "Yamaha's Marketing Department" in a statement about a bunch of those sales disasters. That was quickly followed by the obvious question, "Yamaha has a marketing department?"

If you look at the really cool bikes that Yamaha and Honda have lost money bringing into this country in the last couple of decades, you have to wonder what happened to the folks who convinced us "you meet the nicest people on a Honda." Honda hasn't managed an innovative advertising campaign since 1969. I don't remember Yamaha's marketing ever doing anything creative in my lifetime. These companies have been on cruise control for so long, we wouldn't take their advise if it was right.

These days, the two big chunks of the big Japanese Four are simply cutting and pasting their Harley-clones into old Harley ads. Check out the ads. If you cut out the logos, you tell me if you can tell a Harley ad from a Valkerie ad from a Royal Star ad. Without a sincere interest in farm implement design and the you'd-never-mistake-it-for-anything-else, all-time-most-butt-ugliest-bike-in-history-ness of the Valkerie, you wouldn't be able to tell Hondas from Yamahas from Harleys in those same ads.

If someone who cared discovered that these three companies all share the same clothing models, accessory designers, aftermarket component suppliers, and a custom seat manufacturer (whoops, they do; Corbin), it wouldn't surprise me at all. Essentially, they all make the same bike for the same people for the same purpose. 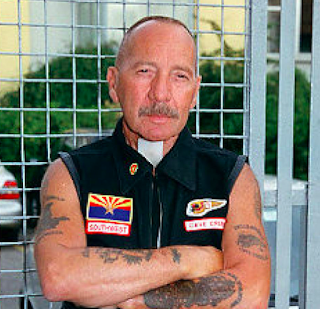 I guess I should be flattered. A couple billion dollars of manufacturing horsepower has been aimed at building plodding hippopotamuses for the rich geezers of my very own generation. All of those geeky kids who aspired to MBA and computer science degrees from upper-crust schools suddenly decided they need to be rebels without clues. They've traded in their creepy wingtips with tassels and three piece suits for even creepier black leather jackets with waist expansion panels and fringed leather chaps. The "Geek-boy meets Sonny Barger" look. Go ahead, tell me the picture on this site (http://sonnybarger.com/) doesn't look like your neighborhood investment banker on his way to a yuppie bar in Wisconsin.

While all this posturing and positioning for the last financial gasps of the Boomer generation is going on, you gotta wonder if anyone is thinking about two-wheeling in the years after Y2k? My kids generation could care less what Pete Fonda was riding when he ate the big one in an obscure, godawful 1967 B-movie. While motorcycle sales are up this year, for the first time in a couple of decades, most of those sales are going to geezers who won't be doing anything on two wheels in less than a decade.

Marketing, at its best, is education. At it's worst, it's a pointless waste of money. Honda, Yamaha, or somebody better buy a clue and get excited about selling motorcycles that have a purpose. If they don't learn how to generate a lot of interest in riders under age 55, we'll see "the crash of '83" all over again in a very few years.

[Postscript: I was challenged to review these comments by a friend who's been "in the industry" for the last 15 years. Nope, I still stand by it 18 years later. Nothing noticeable has changed.]
Posted by T.W. Day at Monday, May 13, 2013