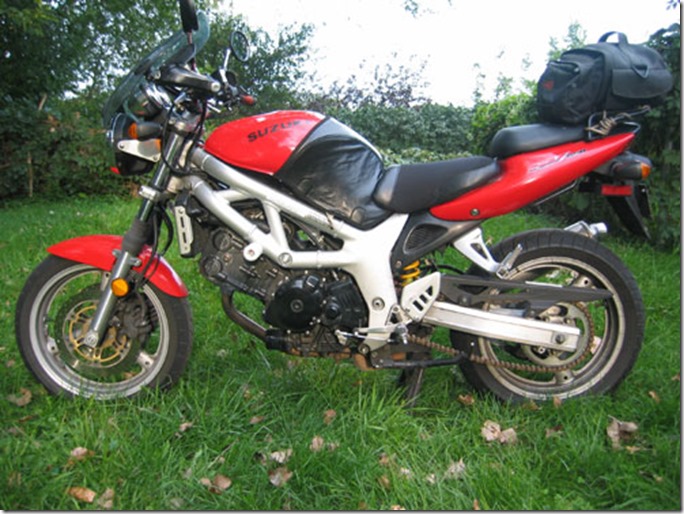 The SV and I have had a recent and occasionally scary life together. My first experience on the bike practically exposed me to the entire assortment of nasty Midwestern weather. I picked the bike up, in Cleveland, in mid-May 2000. On the way back, I rode through rain, golf-ball-sized hail, tornado damaged highway strewn with chunks of barns and houses, lots more rain, and three days of miserable cold weather that never warmed up beyond 42o F.  In the first week of ownership, I think I suffered more riding pains with this bike than with anything I've owned since my first Harley.

I broke almost every rule I own about buying vehicles when I popped for the SV. I guess that was a sign of how badly I wanted to own this motorcycle. I work hard at never buying a car or motorcycle from any male under the age of 40. Kids, especially male kids, are too damn dumb to be allowed to play with anything more complicated than a rubber hammer in a padded room.  Motorcycles are way more complicated than hammers. I bought the bike from a kid who had diddled with the bike in several ways that ought to have warned me off the bike.  He crashed the bike (in his driveway) about 100 miles into his ownership of the SV and gave up motorcycling and bought a big truck.

Buying the bike was fairly painless, even though it was done over 1,000 miles, sight unseen. But putting the bike into riding shape was a challenge. I often thought I'd have been better off by spending the $1,200 I saved on a new bike that had never been mangled by a kid and his money. Six years later, I'm finally confident that it's all debugged. From the seat bolts to the carbs and the air filter box, parts were lost or mangled. The carb had been re-jetted and the plugs ran so rich you could probably get an extra mile out of the bike after the tank went dry, just from the unburned fuel fouled on the plugs. I returned everything to stock, over the next few years while  I put another 27,000 miles on the bike.

The SV did introduce me to my first on-road crash, after a couple of weeks of uneventful commuting, a short trip on the bike ended up with my suffering a mashed foot. The short version is that I screwed up in a hairpin corner and ended up highsided in the grass, with my right foot firmly stuffed between the rear tire and the frame.  My first ever road accident, after nearly 300,000 miles of jelly-side-up riding.  It turned out that the previous owner (or the shop that did his work) had mashed a throttle cable between the carb and the frame.  When the bars were turned full lock to the right, the bike auto-accelerated itself into instability.

The SV's mileage is fair, about 44-48mpg, with a range of less than 180 miles.  That's a not awful, but not great.  The motor is so strong, however, that I tend to forgive the fuel inefficiency.  It doesn't use a drop of oil between changes and the bike layout is a dream to maintain.

Since my first mishap, the SV and I made peace. It's an incredible bike with great power, decent handling, and fair rider comfort.  The SV is more of a sport bike than a "standard," regardless of advertising and media hype.  The riding position is aggressive enough that my legs tend to cramp after a few hundred miles.  I, often, miss the TDM. I'm thinking about Super Motard-ing the SV in the near future. I know more than a few folks, however, who put big miles on their SV650 standards and do it mostly painlessly. I'm almost 60, after all. I'm not all that comfortable in my easy chair after an hour or so.

In fact, I went several steps toward turning my SV into a mediocre version of the Suzuki DL650, including adventure touring tires. About four years into that experiment, the DL (V-Strom) was introduced to the US and a lot of my customizing work seemed pointless. I'll be selling my SV this coming spring (2005), but it has been a wonderfully reliable, comfortable, lightweight, sporty bike and, even after the initial poor experience, I will have nothing but fond memories of my little red SV.

Postscript: The bike didn't sell during the spring and summer of 2005, but I also didn't find a DL to replace it with until September 2005. After assuring myself that the DL was the Suzuki I wanted to keep, I posted the SV in Craig's List during the winter months. A buyer showed up in mid-January, handed me cash, strapped on an open-face helmet, and rode the SV away in sub-freezing weather. I hope he's as happy to have it as I was to be rid of it. There would have been no point in owning 2 Suzuki 650s.

Fork Oil: Check oil measurement from the top of the fork tube to the oil level in the fork, not by measuring the oil you pour into the fork. I recommend Bel-Ray 12wt. fork oil.

Carb Sync'ing: Remove the plugs from the fuel screws and screw them all the way in, then turn them out one additional turn. Remove the float bowls and check the float bowl level. Do this before you sync the carbs. Put a .020." shim under the plastic shim on the needles. DO NOT allow gas to get on the rubber slide diaphragms or they will be ruined. Reassemble the carbs and check carb sync.

Run a fuel hose from the # 1 carb toward the steering head, secure it to the wiring, and plug it with a screw. You won't have to remove the carbs to synch them afterwards. The carbs must be at a precise angle for accurate adjustment.

Getting the SV into the air for service is a problem, due to the low pipe and motor-frame design of the SV. I bought a cheap bike jack from Sam's Club, but it wasn't useful until I built a plywood jack frame for the jack. Here's a drawing someone created to allow a flat-based garage lift to work on the SV (don't worry, it's high res if you download the picture): 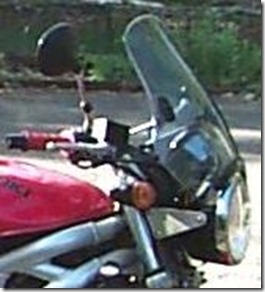 I bought this shield on the recommendation of the GIVI service department. So far, I think it was a good purchase and it doesn't do much damage to the look of the bike, either. The mounting is fairly straightforward, but, because of the SV's handlebar setup, there isn't much flexibility in the shield adjustment. The GIVI hardware can not be faulted. It's incredibly flexible and well designed. I managed to highside the bike and the GIVI took most of the brunt of the crash. Other than some minor scratches on the lower portion of the shield, it held up perfectly.

The A600 provides a decent amount of chest protection from weather and wind. It doesn't do much for the wind noise, since it directs some turbulence right at the top vent of my Shoei X8 helmet. Overall, I'd rather have the windshield on the bike than not, which is no terrific recommendation, but it's the best I can give because of the noise factor.

From what I've experienced, this seat is very comfortable and worth the money. I bought the spandex-like material version of the seat. I guess there's a faux carbon fibre version, too. It's fairly firm and the material breathes well. I didn't actually put in any time on the stock seat, so I can't offer a useful comparison.  The seat slopes forward, toward the tank, which creates some discomfort on long rides.

It's a dinky thing with an advertised "5 lb." Carrying capacity. You can see what it looks like (sort of) on the picture above. I suspect the weight limit is legal-weasel wording, but it's not a significant piece of equipment, by any standards. It is large enough to hold a tank bag and has posts and bracing that works well for the straps and bungees. It was a bit expensive, but I've found good use for the rack. 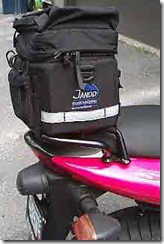 This is a two-for-one picture; the Suzuki Luggage Rack and a bag that actually fits it well. I found the bag at my local (Eric's) bicycle shop, on sale. There are probably a pile of equally decent bags, but this one seems to be almost perfectly designed for use on the Suzuki rack. It has four Velcro attached straps and a Delrin buckle, all of which can be used to secure the bag to the rack. It is incredibly waterproof and holds a reasonable amount of stuff, in the normal configuration, and a lot of stuff with the extension added. Click on the picture to see more detail. The zippers were crap and the bag died after about a year.

Like the aftermarket pipes I had on the TDM, this pipe is noisy. My Harley-owning next-door neighbor says he really likes the sound of the M2 oval, if that tells you anything. I, as usual, doubt that the pipe adds anything power-wise to the bike and it makes it a lot less neighbor friendly. Unlike the TDM stock exhaust, it's hard to believe that the 2Bros is light enough to be worth the cost/noise/effort. You can see what the M2 looks like on the picture at the top of the page. If you're more into getting noticed than riding unnoticed by cops and angry neighbors, this is the pipe for you. I suffered with it for about two months and went back to the stock pipe. I suppose someone will give me a few extra bucks for the bike, when I sell it, because it will come with a high priced noisemaker. (PS. I changed my mind and sold the M2 in 2006.)
Posted by T.W. Day

Email ThisBlogThis!Share to TwitterShare to FacebookShare to Pinterest
Labels: my motorcycles, suzuki, sv650