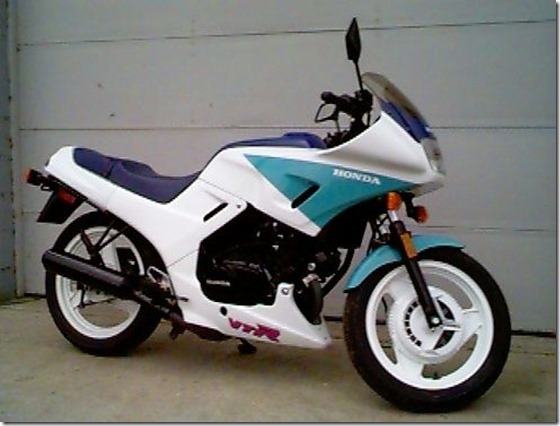 I bought this bike in the spring of 1999, after I'd decided against popping $6k for a new Suzuki SV650. I can only say good things about the VTR. It constantly amazes me that Americans don't consider small bikes like this as basic transportation. I've turned in a 95mpg tank and several long range trips averaged 75mpg. The bike will do 95mph and passes cars at normal freeway speeds with ease. A friend bought a CBX about the same time I aquired the VTR. On an around town trip, he was discouraged to find that he couldn't get the little 250 out of his rear view mirror.

The riding position is a bit cramped, but not so much that anything under 100 miles becomes painful (to a 50 year old in mediocre shape, BTW). The funky 1980's California colors probably didn't do the bike any good, sales-wise. My brother was particularly offended by the pink highlights. I bought the 250 hoping my wife would go back to riding, she didn't but I rode the heck out of "her bike."

In fact, I did nothing but ride this bike. I suspect the original Bridgestone tires are still on the bike, at 13,000 miles. They're hard as nails and wear at least as well. They don't do anything for the handling, but the bike gets along fine with them, so I didn't find motivation to install new skins. If I did, though, I think I'd pick Dunlop 591 Sport Elite's, a good sticky tire with reasonable wear characteristics. In the time I owned the VTR250, the only maintenance I provided was oil changes and a change of radiator fluid. I was too lazy to even replace the fork fluid, a first for me.

I sold the bike, in June 2000, to my brother. He enjoyed it as much as I did and put a lot more miles on the little bike. He rode it from Kansas into the mountains of Colorado with a group of biking friends (half of which trailered their big twins to the planned campsite). After taking a lot of crap about his "little bike," one of his cruiser friends found himself perched on the passenger pegs when his big Hardly died in the mountains and he needed a 200 mile ride back to his truck so that he could trailer the cruiser back home for an engine rebuild. 450+ pounds on a 250 twin in the heart of the Colorado Rockies and the little bike did that job, hauled Larry back home afterwards, and put in a lot of miles beyond that. 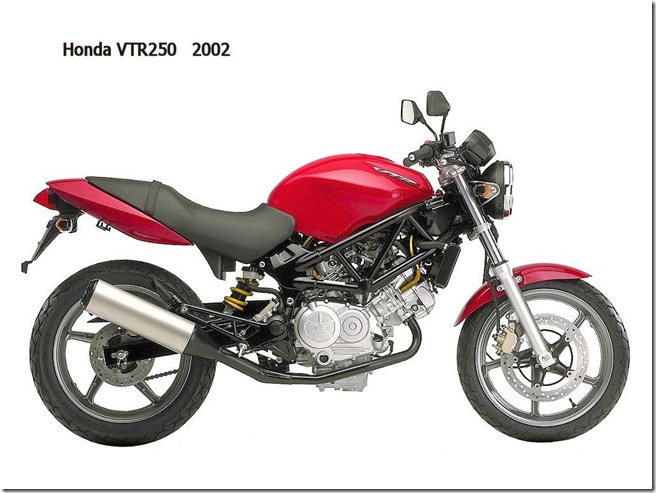 It was an incredibly versatile little bike and I missed it imediately. I only put 2,000 miles on this little guy in a year of riding. I can't say I enjoyed doing long trips on it, because it was a bit cramped and the suspension is pretty stiff. But for an around town, short haul commuter, it's almost perfect. Of course, my father thinks I "unloaded" the bike on my unsuspecting little brother. I wonder if he'll ever figure out that Larry got me into motorcycling, not the other way around.

The 2002 version of this bike is so sexy that I'd almost consider the hassle of importing it (see beautiful little red bike at right). We rarely get the super-cool stuff that Japan builds, especially if that stuff is under 700cc. The current model of VTR is exactly what an urban commuter should be about: lightweight, small, quick, nimble, and gorgeous. I'd buy one new (something I haven't done in 30 years).

Email ThisBlogThis!Share to TwitterShare to FacebookShare to Pinterest
Labels: Honda, my motorcycles, vtr250

I'm about to pick up a 1989 Honda VTR250 myself! I've read alot of great reviews on this little unsuspecting beauty, and it will be my first street bike. I'm new to riding, but have some basic experience from a enduro. This sounds like a journey worth talking about!