VW, Not A Motorcycle Company

Two years ago, I was just recovering from the misery of owning a VW-based Winnebago Class C RV. Needless to say, I was pretty disgusted with Volkswagen. It’s sort of reassuring and heartening to see that the rest of the world has joined in my disgust for the delusional German maker of mediocre vehicles and standard for half-assed engineering. While Germany is desperately trying to paint this pig pink, "VW scandal has not hurt German reputation, Merkel says," the country’s entire economy—largely dependent on auto manufacturing—has been put in jepardy by VW’s internal arrogance, delusions, and criminal behavior. As I wrote in “Delusional Self-Image” (February, 2014), “As demonstrated by their semi-crazed explanation for shriveling and lower-profit markets, VW/Porsche marketing dweebs seem to be disconnected from reality.”  As climate change deniers, war mongers, trickle-down economists, and free lunch believers keep discovering to their dismay, reality has a nasty habit of showing up uninvited. As best I can tell, VW is pretty much completely under the control of the marketing morons, which means they’re going to have one hell of a hard time fixing any of their problems. If there is one thing I know about marketing asshats, it is that they don’t know how anything works and couldn’t fix a hole in a paperbag with a truck load of duct tape. “Far Fig Newton,” my ass, and I’m not the only one who thinks VW has put Germany, the Euro, and a lot more in jepardy: 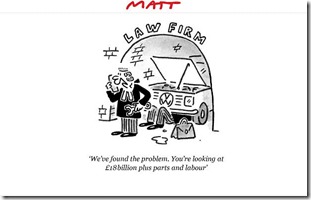 I think the origins of VW’s problems came from the nutty idea that shutting out independent repair centers would improve VW’s customer service reputation (which has never been good). VW cut off the usual DIY service manual outlets in the mid-90’s and starting charging independents a whole lot of money for access to VW’s online service information system. Since most good shops don’t seen enough VW product to make paying $400 a month for service information worthwhile, lots of good independents simple quit working on VWs. The hope was that this would drive VW owners to VW dealerships for service. That probably is what happened, but what also happened was that lots of people who might have considered buying a VW didn’t because their local VW dealer was the usual ripoff shop.

The largely-unappreciated independent service center quality control loop was broken, too. Regardless of a manufacturer’s intention, it is almost impossible to stop complaints from an independent service tech from getting to the right ears. Piss one of these guys off with a manual or service procedure that results in screwing up one of their customer’s cars or costs them a repair bill and you’ll hear about it. Obsolete a critical part that means a tech will have to apologize to customers for not being able to fix their vehicle and someone in the Parts Department is going to get an ear-full. Kill that free system check and you end up being Volkswagen; deaf, dumb, and arrogant. Because all of VW's internal quality systems are closed loop, internally, they are not driven to fix their system and probably don't even know it's broken. Actually, it's pretty obvious that VW has no idea what the outside world thinks of them. I think they are getting an idea now, though. 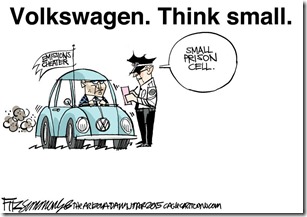 It has always amazed me to hear the constantly repeated claim that VW is the “largest car manufacturer in the world.” I can only suspect that they make some really, really physically huge Hummer knockoffs, because I can not fathom how VW could be outselling any of the Japanese Big Three, Ford, or, even, Fiat. After this dropping-of-the-drawers, I suspect Toyota will be sitting on top. There are so many things wrong with that picture I am overwhelmed and confused. (The next Led Zep hit?) VW hasn’t made a decent vehicle since the 1967 Beetle. At least, in my opinion, and nobody sensible made big reliability claims for the old air cooled VW shit. Those silly vehicles were just fun to drive, fix, and look at while they were cooking on the side of the road after catching fire from overheating or a fuel system fault.

As you probably know, VW/Audi bought Ducati. I can’t guess why, Wired Magazine’s article about this curious aquisition included the funny but probably unintentionally ironic comment, “If VW started selling Golfs that went 175mph, but cost $75,000, got 8 mpg, required $5,000 services every 4,000 miles and blew up after 20,000 miles, VW would be in a lot of trouble.” Actually, VW Golfs are not particularly reliable, are expensive to repair, and the only thing they don’t have that Ducati makes claim to is the 175mpg top speed. Although, I suspect if you were to occasionally push the Golf GTI to its claimed top speed of 155mph, you’d probably also be rewarded with “8 mpg. . . $5,000 services every 4,000 miles and . . . 20,000 mile” engine life. There are understandible reasons why VW/Audi would feel compatible with Ducati (and Ducati owners): 1) advertised performance is more important than real world performance, 2) the product’s owners are easily deluded into believing that the product’s perceived quality image will rub off on the owners, 3) reliability is an inconsequential feature, 4) a dealer network is unimportant and dealer support is a waste of effort, 5) customers are what you have before the sale and suckers are the fools who show up with one of your products expecting service or support. 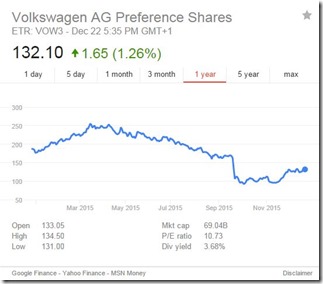 Ok, so I’m wrong. VW is a motorcycle company, just not a very good one and not one that will ever see a dime of my money. Of course, VW/Audi has to survive this $9B+ disaster and still have customers gullible enough to buy their crap when this is over, so we’ll see if VW can sell cars or motorcycles.