This one is probably gonna hurt. Call me a “bleedin’ heart liberal,” but most of the “news” I can stomach comes through the Comedy Central filter. The ONLY way I can stomach bullshit from Fox is in quick segments punctuated by precise and accurate ridicule from Cobert, Stewart, or Trevor Noah. December 10th, 2015, The Daily Show with Trevor Noah’s segment on “A Good Guy with a Gun” highlights what is, apparently, a general delusions in the United States about guns . . . and motorcycles: every idiot with a credit card thinks he or she is smart and quick and skilled enough to play with guns and/or motorcycles.

Listening to the training experts and cops explain to Jordan Keppler how complicated real world gun use works was eerily like being a motorcycle safety instructor. After being shot 20+ times by simulated bad guys, getting shot again by the cops because he was too stupid to put his gun down when they showed up, and shooting an unarmed simulated teenager trying to escape the bad guys, Klepper said, “Being a good guy with a gun was starting to feel way more complicated than movies and video games and politicians make it seem.” Afterwards, the situation trainer said, “It’s a complex situation and you don’t want just give people guns and say you assume they know what they’re going to do.” He followed that statement with a description of the many hours of training necessary to keep professionals semi-competent. (We know they are only semi-competent because the so-called professionals keep killing unarmed citizens.) Klepper replied, “Who’s got time for all that training?” And so it goes.
What part of this sounds like motorcycle sales, the outsized percentage of highway deaths attributed to motorcycle dumbasses, limp and lame and ineffective motorcycle “safety training,” and the general stupid attitude of lard-assed morons who think that because they waddle through a massively under-simplified “training course” on a bike that is 1/8 the size of the hippobike they’ve bought and still can’t ride and now have a license they are “motorcyclists?” I know these people, based on the characters (see above) who stood in line to buy guns and ammunition in San Bernardino after the mass shooting last week. These stupid fucks buy guns and kill themselves, their friends and families, and random people who piss them off by existing are the exactly the same morons who plop their obese lardasses on a Hardly, Victory, V-Star, or whatever unride-able bullshit they’ve been convinced will make them look less gross and stupid (as close to “cool” as they will ever be) and promptly drive off of the road and kill or maim themselves. If they live, their response will be to sue the state for putting curves in the road that are negotiable in a semi pulling a 50’ trailer, but unmanageable in a hippobike. 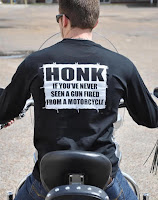 Yeah, I’m pissed off. How did a country that managed to fumble and fight its way out of the United Kingdom manage to down-breed itself into this stupid shit in only 240 years? If that doesn’t convince you that evolution is a two-way street, you probably own a gun and a Harley and can’t use either competently.
http://www.cc.com/full-episodes/vowh47/the-daily-show-with-trevor-noah-december-10--2015---michael-strahan-season-21-ep-21036
Posted by T.W. Day at Tuesday, December 15, 2015