Zen and Now: On the Trail of Robert Pirsig and the Art of Motorcycle Maintenance 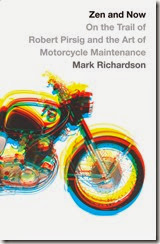 There are a lot of books with Minnesota for scenery and there are a lot of Minnesota authors, but there are only a few books, from anywhere, that change lives. Robert Pirsig's Zen and the Art of Motorcycle Maintenance is, unquestionably, one of those books. Minnesota is prominent in the original Zen and there are more than a few references to our home state in Zen and Now. Pirsig's life began here, both his technical writing and teaching career had roots in his life in Minnesota, and, for a time, he came back to Minnesota to live and write. Richardson follows that path, while creating his own Zen trip on a grossly overloaded 1980's Suzuki dual purpose bike. Richardson starts at the beginning, 458 Otis Avenue in St. Paul, and ends on the street in San Francisco where Chris Pirsig was murdered. For many of Zen and Pirsig's fans, too much of the Art of Motorcycle Maintenance portion of the story ended, sadly, with the author visiting the site of Chris' death and some of the motivation for Pirsig's self-imposed exile. 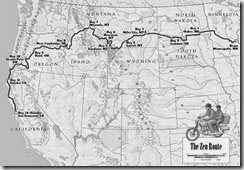 I stumbled on to Zen and Now looking for something to use as a road map reference to Pirsig's original journey. The map you see at the bottom of this review was what I found and it is one of the few illustrations in Richardson's book. There have been more than a few times in my life when I needed a Zen trip to clear out the crap that naturally clutters the remains of my mind. Lots of reminders have arrived lately to inform me that the capacity to actually follow the Pirsig path is nearly at an end for me. If I'm going to do it, it will have to be soon.
Richardson was approaching his 42nd birthday when he began his Zen mapped trip. Richardson packed his wife and two sons off for a visit with family in England and began a well-researched retracing of Robert and Chris Pirsig's trip from Minnesota to California about the same time of year as the original journey. It only takes a few pages of Zen and Now to realize you are reading a midlife crisis book. Far too many motorcycle books are about this subject and after Richardson has a drunken, near-carnal moment with a 21-year-old girl he met at a motel in Lemmon, South Dakota I was pretty much tired of Mark Richardson and his story. His self-absorption and arrogance were too damn familiar and uncomfortable, maybe. The trick to writing a travel/self-realization book is exposure. Essentially, you have to pull down your pants, stick your ass out the window, and moon people you might have to face the next day. Richardson did exactly that with this segment and he continues to make himself less perfectly likeable throughout Zen and Now. The point in downgrading himself as a protagonist might have been to illuminate the humanity and complexity of the people he meets along the way. If it was, it worked. If it wasn't, it still worked. A lot of the people Pirsig touched in his book are illuminated and fleshed-out in Zen and Now. Richardson’s timing was excellent. Some of those characters didn’t live much past his last contact with them. He is a sensitive and insightful writer and it would have been a shame not to get to know these people a little better.
A side "trip" bonus from Zen and Now is the background story of Robert Pirsig and his family. I knew just enough about Chris’ short life to pretty much completely misunderstand the tragedy of his story. Cursed by being identified by fools as “that whiny kid,” Chris and his brother, Ted, had a tough time with adolescence. It is exceptionally sad for me to think that Chris was saddled with that along with his dysfunctional father. I don’t remember ever considering his book character as whiny. I will always think of him as a brave, overwhelmed, loving kid struggling to save and regain his father’s love and life. If you know of a more courageous thing for a kid to do, I probably don’t have the stomach to hear about it.
Part of Richardson’s purpose in writing Zen and Now was to introduce new readers to an American classic novel and to inspire the rest of us to read it again or to the end for the first time. It worked for me.
Posted by T.W. Day at Thursday, December 31, 2015