Put all the Idiots on Motorcycles

Against my better judgment, we spent a couple of days in the Cities this weekend. No place on earth, except possibly Seattle, is more in need of autonomous cars than Minnesota’s Twin Cities. The average driver IQ has to be well below 100 and the closer you get to the UofM, the dumber the drivers get. Watching the bumper car crowd tailgate each other like lemmings on the way to the cliff, my first thought was that there should be a special class of cage for idiots with minimal protection and harmless mass so that when these morons crash their survival rate and the damage they do to others on the road approaches zero. As soon as I said that out loud my wife replied, "There is, motorcycles. "

Almost immediately we were passed by some helmetless, bald fucktard on a sportbike in his shorts and wife beater and sandals. As he locked on to the bumper of the car in front of him, he took both hands off of the bars and gave the disinterested traffic behind him an “Awe-nold” muscle-head pose. Yep, we are, more often than not, prime Darwin Award winners deserving of absolutely no sympathy at all. To be honest, if the cage in front of this display of incompetence and cluelessness put on its brakes and tossed the biker into the air, I’m hard pressed to be able to say I would stop to render anything other than being a witness to the cager’s innocence. If the about-to-be-skinned-alive biker’s body bits flew into the path of my vehicle, I can tell you for certain that I would absolutely not put myself, my wife, or my vehicle in any jeopardy making evasive maneuvers in his behalf. 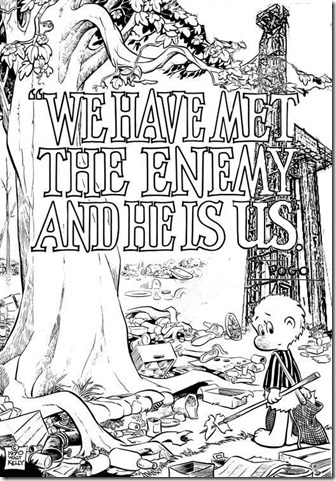 For the most part, I have to say driving east to west across the city on Saturday and in the reverse direction Sunday provided overwhelming evidence that the whole “Start Seeing Motorcycles” promotion is wrong-headed, statistically clueless, and probably creates more pissed off drivers than careful ones. This weekend, “We have met the enemy and he is us.”