Everybody is getting on the "motorcyclists ought to be wearing helmets" bandwagon. MPR did a segment a few weeks about about the burst of motorcycle deaths in early 2013 and how few of the dead and buried were wearing "helmets." One of the local television noise generators repeated that theme and "moderated" the common sense recommendation by interviewing someone from ABATE spewing their tired "everyone just needs to look out for us" and "training is the answer" song and dance. For once,

ABATE and AAA were on the same page in that spring death-match propaganda blitz. They both quoted the same statistic that reported "wearing a helmet in a crash reduces the risk of death by 35 percent and the risk of brain injury by 67 percent." ABATE added the word "only" to each of those numbers, attempting to prove that helmets didn't really do much toward making motorcycles less suicidal. Sometimes, I'm not sure whose side those guys are on. 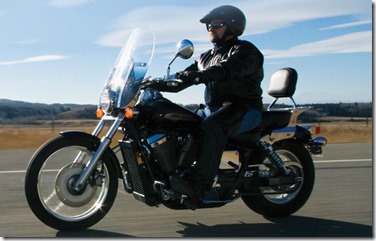 AAA's front section AAAAdvice article ("Motorcycle Helmets Save Lives") included the picture at right. I see that as a failure to communicate. That silly looking lid is not a helmet. It barely qualifies as a hardhat. It's possible that useless baseball cap might provide some protection if a cup of crushed ice were dropped from a second story window and it landed squarely on top of the rider's head. Not likely, but possible. The chances that a pudding bowl helmet will save your life, your consciousness, or your pretty face is pretty predictable, though. 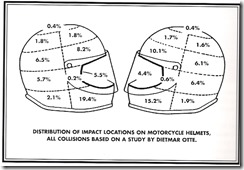 It should be pretty obvious that a beanie helmet is good for about 20% of the impact that will coming your way when you hit the asphalt. If we wanted to be overly-optimistic, we could add the 19.3% of the forehead hits to the protected area, but I do not feel that is realistic. For example, Mr. AAA Douchebag's helmet at left makes a special effort to show his shiny forehead so that his admiring fellow douchebags will know who he is. That exposed area and the edge of the helmet above it provides plenty of leverage for the sliding surface to pull the helmet up and, possibly, away from that critical and fragile area of the skull. At least Mr AAA Douchebag has a 3/4 helmet on his pointy head. Gay little biker beanies (Don't get your panties in a wad, girlymen. I mean "happy" or "festive.") like the thing at left are pretty much useless as protection 80% of time when a helmet hits the road. Unless you can figure out how to slide down the road on the top of your head (without grinding through the cheap plastic this sort of cheeseball helmet is made from), you might as well be wearing a bicycle helmet (another useless piece of mal-designed "protective gear"). This kind of hat is a designer statement, like high-heeled red shoes. It is not armor. Obviously, biker beanies automatically go with biker face (see douchebag at left, again) and there would be no point in spending all those hours in front of the mirror practicing your biker face if you were going to wear a real helmet and be a real motorcyclist. How would anyone know how serious you are if they can't see your scowl?

I have no idea what percentage of helmet wearers are wearing this kind of crap, but when I see the words "Harley Davidson," "motorcycle death," and "was wearing a helmet" in the same news report, I automatically assume this silly shit is what the cops included in their crash report as a "helmet." If I haven't made myself clear by now, I do not consider anything of the sort even close to a motorcycle helmet. The sound of blubbering, poorly-tuned tractor motors naturally ties to either no helmet or awful helmets and . . . death by motorcycle. On the rare occasion I see a hippobike rider wearing a real, full-face helmet, it always causes me to do a double, or triple, take. Exposing my natural prejudices to the air of honest admission, it also automatically forces me to re-evaluate all of my preconceived notions about Harley owners. "If the guy is wearing real gear, is it possible his bike is not garage candy? Probably. Can I imagine that he rides it to work and for general transportation? Probably. Damn. Now where do I pigeon-hole this dude?"

I realize that nobody dresses to impress me. I don't even try to impress me. But I suspect I'm not the only motorcyclist who has a similar check-list. Even more important, you should know that your designer hat is not a real helmet and it will more than likely be useless in a crash. You might imagine that you're not going to crash and won't need a real helmet, anyway. I suspect those dead folks the media clowns were talking about this spring didn't plan on dying, either. Plan for the worst, hope for the best.