I grew up with the advice, “Never mention politics or religion, in polite conversation.” I didn't follow that advice, but I heard it a lot. My father and I did a solidly poor job of even honoring the spirit; and our relationship pretty much proved how valid that guidance could have been. For most of my life, being who I am seems to reflexively cause that polite rule to be abused. Something about me appears to inspire the most degenerate, least informed, nosiest and noisiest, least sober, least credible evangelists into a doomed attempt to “spread the word” at the expense of my peace and quiet. (Trust me, I’ve heard the spiel—and have been hearing it since I was a child—and no matter who you are, who you represent, what god(s) you follow, what key you’re going to sing in, or what line you’re going to take, I’ve been there and heard it.) 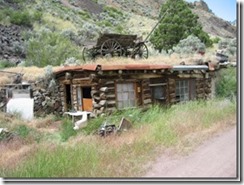 So, today’s experience at the library was just one in a long line of related bad experiences that have made me want to move to my Montana retirement mansion (at right) and keep a loaded shotgun by the door for greeting all visitors. I do play to fire a couple of warning shots to the head to get your attention, so be ready to duck if you show up unannounced. On the way out the door and back to my bike, a guy ran me down to ask where I’d bought my official MMM jacket. You can’t get there from here, but I aimed him at Bob’s Cycle Supply for the next best thing. He argued that they didn’t carry it although I’d been there earlier in the week and they were still in stock at that time. Trying to politely escape (my first and often repeated mistake), I pulled off the jacket to show him the brand and model label and kept trying to get to the bike. I reminded him that the MMM portion of the jacket was custom and, probably, unavailable.

When I mentioned that the jacket’s denim cover is pretty worthless but that the armor in the jacket wasn’t bad, he said “Road rash is like military patches. It shows who you are and where you’ve been.”

I disagreed (compounding my above mistakes) by saying “Neither says much, since the military gives away that stuff in Cracker Jack boxes and you can buy impressive-looking patches and pins at most Army/Navy stores or pawn shops and bicycle, skateboard,  or falling-down-concrete-stairs scars look pretty much like motorcycle rash unless you’ve ground off a limb.”

That inspired a long, boring story of his career in the Air Force (my least favorite of a list of least favorite government agencies) [My father-in-law was a Korea Air Farce "warrior" and what I mostly learned from him was that if you are married to an Air Farcer you should avoid as much physical contact as possible. They get the clap more often than squirrels get nuts.] and his simultaneous experience in some sort of military biker gang. From there, he slid into a story of hitting a deer and surviving mostly unscratched. His “armor” in that incident was having spent a few moments praying over his motorcycle before leaving the bar for home. The deer hit his bike (a big Yamaha V-Star of some sort), bent some fender bits, and left some fur on a side case but he and the deer survived without serious injury. Therefore, praying worked. I should have kept moving, but I had to tell him that my more-pious-than-anyone-I-know brother had a similar dust-up with a deer and he ended up with a busted up ankle that has plagued him for the last five years (the deer didn’t survive). Knowing my brother, there was plenty of praying going on before he left my parents’ house for home and even if the praying wasn’t done over his motorcycle, it was done as well as that ritual can be performed. I remain unconvinced that the library dude added anything meaningful beyond what my parents and brother could do. The idea that his angel was more focused than my brother’s is simply ludicrous. That inspired a lecture about believing vs. something I couldn't identify, probably due to my heretical nature.

Still trying to get to my bike, strap my gear on, and escape without more comment than necessary. He made some comment about all the gear I was wearing (not that close to AGAT, but a lot closer than his street clothes). I let that one pass, but did make a less-than-respectful comment about pudding bowl helmets. Surprise! That was the only kind of helmet he owns. More conversation to ignore as I plugged my ears and pulled on my helmet. Before the ear plugs sealed up, he expressed surprise that it took me so little effort to put on the helmet.

As best I could tell, the one-sided conversation swung from ranting about helmet laws to being pissed off about the "safety Nazis," but I had the sense to ignore that bait and fired up the WR. As I struggled to back the bike out of the parking space while he attempted to strategically position himself in my way, I caught snippets of unwanted information about his engineering career, his plan to dominate the three-string guitar market (He was not a player, but had read something about cheap guitars getting trendy.), and an offer to co-write something about something. I escaped cleanly, without have exchanged names or other useful information. 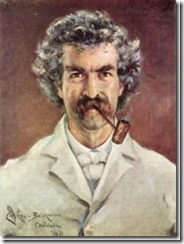 When I got home and told my wife about the experience, she marveled at how hard it is for me to get away from salespeople and talkative drunks. "Must be genetic," I replied. I always had way too much trouble getting away from my family and the same sort of conversations.

Possibly. When pressed against this kind of wall, I usually look to my hero, Mark Twain, for an explanation. The best I could find was, “I am quite sure now that often, very often, in matters concerning religion and politics a man's reasoning powers are not above the monkey's.” Pretty much the same thing my wife said.

Email ThisBlogThis!Share to TwitterShare to FacebookShare to Pinterest
Labels: agat, all the gear all the time, politics, religion, safety training